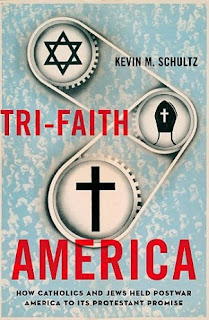 Blogs like this one let us know about books that are about to come out and those that have just been published. But with time, it is scholarly reviews which help us know what books we should definitely read. And, after one year available in print, it seems pretty clear to me that Kevin Schultz's Tri-Faith America is one of those books. Here's some praise I found from pretty notable reviewers: