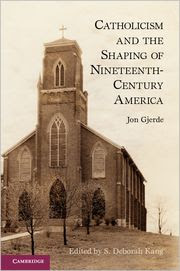 Continuing on with our series on new/newish works in early American Catholicism and its relationship to broader themes of American religion and politics, today I'm featuring a book Mike Pasquier blogged about before: Maura Farrelly, Papist Patriots: The Making of an American Catholic Identity. I'm pairing it up with a work whose appearance comes with renewed sadness and grief: Jon Gjerde's Catholicism and the Shaping of Nineteenth-Century America. Jon Gjerde (1953-2008) arrived at Berkeley while I was a graduate student. Although I was never his student, I knew him as a warm, kind person, a tremendous historian who bore his learning lightly, and as eager to talk about his family or his analysis of the Minnesota Timberwolves as to explain his techniques of analyzing demographic data from the nineteenth century. He died of a heart attack in 2008.


After the jump, more on both books.

First, a review of Maura Farrelly's work, which I recently had the great pleasure of reading. As a former journalist, Maura writes with a crystalline clarity on her subject, engaging from page one to the end. She starts with a simple question that is very obvious -- and yet not so obvious since I've never seen it asked in such a clarifying way before, to wit: why did Catholics support the American revolution, given the anti-Catholic bent of Anglo-American Protestantism (as seen in the Quebec Act, for example)?

The book is a searching, well-researched answer to that question, finding that Catholics in the ear before the massive immigration tides of the 1840s and after had "Americanized" themselves, identifying with republicanism. This raises immediately another question: given that there were more Catholics in the South than in the North prior to the 1830s or so (primarily because of Maryland and Louisiana), how did American Catholics square the circle of republicanism, a hierarchical church, and slaveholding. Her answer comes in part in this book and even more clearly in a terrific article soon to appear in Early American Studies, entitled "American Slavery, American Freedom, American Catholicism," which examines how much Catholic republicanism mirrored and paralleled that created by southern slaveholders. American Catholicism, as she explores was "born in a slaveholding context," much in the same way that Edmund Morgan famously explored for Virginia republicanism in American Slavery, American Freedom.

Anyway, a quick review of Papist Patriots from choice, and you can also read a much more extensive and detailed one (which takes issue with the author on a few points) here (part I) and here (part II).

Christopher said…
All of these books on early American Catholicism look great. Thanks for the reviews/notices!
July 20, 2012 at 7:04 AM