The recent informative posts on early American Catholic history got me thinking about the long history of Protestant and Catholic interrelations in this country.  True, a lot of it we’d like to forget.  The numerous stories of burrowing and borrowing between the two traditions still needs to be remembered, however.  That is notably the case with the twentieth century, when Protestant-Catholic engagement became the most self-conscious and sincere.  On the Protestant side, ironically enough, attraction to high-church forms became greatest in what many have assumed to be a premier expression of liberal (i. e., non-nativist) anti-Catholicism, the ecumenical movement.
From a planetary perspective, it looks at present as though the twentieth century was not kind to ecumenical Protestants.  Forget the religious right for just a minute.  Consider that, during the past century into today, the Christianization of the Global South has largely been carried out by Catholics, Anglicans, and the Orthodox churches—the “high” traditions.  Where does that leave the “low” Protestants—the Methodists, Baptists, Congregationalists, and so on—in groups like the National Council of Churches and the World Council of Churches?  Viewing ecumenism as a defensive posturing against a perceived global Catholic takeover is not without warrant.  Certainly, leading American ecumenists like Charles Clayton Morrison and Henry Van Dusen were also outspoken liberal anti-Catholics.  But, wait a minute, Anglicans and Episcopalians (and some Anglo-Catholics) were often crucial supporters of Protestant ecumenism nationally and globally.  What difference did their presence in the movement make?  Actually, a lot: They were the vehicles by which traditionally Catholic forms, ideas, and identities entered liberal and moderate mainline institutions.

Long before there was Evangelicals and Catholics Together (ECT), an “Evangelical Catholicism” fired American Protestant imaginations.  That phenomenon also went by “Protestant Catholicity” and “Catholic Protestantism.”  I first learned of those strivings while studying liberal religious leaders like Van Dusen, Morrison, Paul Tillich, Walter Marshall Horton, Francis Miller, and H. Richard Niebuhr.  I eventually decided that those terms expressed the general faith-orientation of entire networks of liberal religious thinkers, including the New Haven-based Theological Discussion Group, which Heather Warren first wrote about in Theologians of a New World Order (Oxford, 1997).  I also discovered that those persons didn’t start Evangelical Catholicism, it was a longstanding collaborative project of pastors, laypersons, religious educators, church administrators that my subjects either grew up in or grew into. 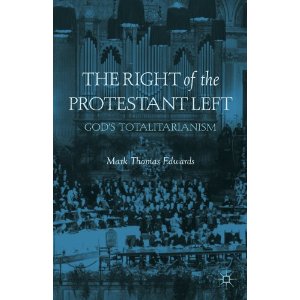 Since Evangelical Catholicism is a centerpiece of my book, The Right of the Protestant Left (Macmillan, 2012), I can’t give too much away here.  Put simply, Evangelical Catholicism represented for its many practitioners a synthesis of the best that Protestant and Roman Catholic history had to offer—Miller, as head of the World Student Christian Federation, predicted in 1933 the birth of a “third great epoch” of Christian history during which Protestants and Catholics would “pool resources.”  In big-picture terms, Evangelical Catholicism aimed at reconciling evangelical individualism and congregational autonomy with the high churches’ emphasis on universality of expression.  For some ecumenical Protestants, it was imperial nostalgia: Take up the mantle of catholicity in order to condemn Rome for failing to be truly universal.  For others, like the Baptist-Congregationalist-Unitarian-become-self-professed-”liberal Catholic” Horton, it was outright admiration: As he wrote in a 1938 study of European theology, Roman Catholicism “knows where it stands and why, and so holds steady in a world shaken to its foundations.”  Vatican II only deepened liberal and moderate mainline appreciation for Catholic expressions and self-concept.  One of my conclusions (admittedly more provocative than proven at present without further on-the-ground research) is that mainline churches today constitute the catholic wing of American evangelicalism.
Frankly, I’m still struggling with how to account for the rise of Evangelical Catholicism as well as its present and future.  T. J. Jackson Lears wrote on this topic some time ago in No Place of Grace (Chicago, 1994), and I’m always tempted to surrender to his verdict.  He was most interested in the attractive power of the Episcopal church and the Middle Ages for middle-class persons inhabiting the urban-industrialization of 1880-1920.  Essentially (and this may be too simplistic on my part), Lears concluded that Americans’ sentimental medievalism was an escape, a way to not deal with mounting socioeconomic and political problems.  Does that mean that United Methodists go goth today in order to “get away from it all?”  To be sure, ecumenical Protestants have been more successful at promoting interracial cooperation and at leveling gender distinctions within their own walls than they have been at challenging racialization and persistent patriarchy within American society.   Yet for my intellectuals, I think the rationale for Evangelical Catholicism was different: They were trying to figure out how one could remain a Christian while admitting the damage done to the evangelical movement by historical relativism and evolutionary theory.  Many of them were self-professed “Christian agnostics” looking for the way forward, first and foremost for themselves.  What they found in high-church tradition was a way to remain theologically and morally uncertain, to admit (for them, gradually) the irreducible pluralism of the human condition, while still being faithful to the historic global Christian community.  In other words, they found what the liberal Protestant apologist Donald Miller once termed “commitment beyond belief.”
My work focuses more on how Theological Discussion Group members sought to politicize Evangelical Catholicism as a response to the rise of totalitarian nationalism.  David R. Bains’s excellent dissertation, “The Liturgical Impulse in Mid-Twentieth-Century American Mainline Protestantism” (Harvard, 1999), as well as his article, “Conduits of Faith: Reinhold Niebuhr’s Liturgical Thought,” Church History 73 (June 2004): 168-94, considers these issues in a more comprehensive way and at a more popular level.  David Hollinger noted recently that ecumenical Protestantism has served as a “half-way house” to secularism.  Might it also have been and currently be a bridge to Catholicism? 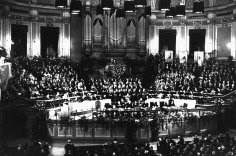 (PS My cover photo of the 1948 First Assembly of the WCC only cost $40.00, the equivalent of five years of royalties, but I find myself missing the grandeur of the original black and white)
Email Post
Labels: catholicism ecumenical movement liberal Protestantism mainline Protestantism religion and politics

Janine Giordano Drake said…
Thank you for this post! I can't wait to read your book and learn more.

I'm glad you are beginning to get us beyond the tired "anti-modernism" explanation for why American (or any) religious people are drawn to liturgy, ritual and tradition. It reminds me what a Protestant country and "condition" we are living in that the onus is on us to explain interest in religious traditions and catholicity in the Body of Christ. In a Catholic country, I imagine, the onus of explanation would be on those who intentionally recreate their faith to catch up to other cultural changes in society!

I also love the observation that the two traditions in the US have been "borrowing" for years. Yes. I definitely can name several examples of that, but I have no cite-able evidence of any of this, because most of the Catholics and Protestants I study would never ever admit to the term "borrowing"! I have wondered how we are going to get past this as a field.

Finally, to what extent do you think this new interest in Evangelical Catholicism is associated with intermarriage across Catholic/Protestant lines? To what extent is it associated with ecumenical Christian college groups (Intervarsity, Campus Crusade, Newman Community, etc) borrowing from one another since the 1960s?

And, to what extent is there a "politics of respectability" associated with being less emotive and open in discussing sins (and other personal matters) with community members within the liturgical traditions?
July 28, 2012 at 9:36 PM

Mark T. Edwards said…
Thanks so much for your thoughts, Janine! It will be interesting to see what your work reveals as well. For instance, was the "church outside the church" liturgical or iconoclastic in orientation, or do those labels even fit? Did one "tactic" seem to be more attractive for workers?

I've found it hard as well to find direct admissions of borrowing between Protestants and Catholics--Bains suggests that alot of Protestant attraction to Catholicism was funneled through Anglicans and Episcopalians. See, though, John R. Scotford, "Where Rome is Right," CHRISTIAN CENTURY 68 (July 4, 1951): 794.

I think your suggestion about intermarriage as a source for Protestant-Catholic interrelations is spot on. I think, too, that cross-overs in membership in between Catholic and mainline churches has become more frequent and fluid; it might be that this has been going on for longer than we know, but studies (take William Shea's THE LION AND THE LAMB, OUP, 2004) tend to focus more on Catholic and conservative evangelical connections--despite the fact that mainline churches have become MUCH more receptive to Catholic traditions during the twentieth century.

I'm sure there are RIAH readers out there as well who could more of a demographic face on Evangelical Catholicism than I can.
July 29, 2012 at 6:14 AM

Janine Giordano Drake said…
Ah, thank you for these references and thoughts. I only know of this movement anecdotally through friends, but can say that one of my good friends who grew up Baptist in Oklahoma is now a full-fledged Catholic monk. And, I was very briefly part of an all Italian-American evangelical denomination in New York. (Nearly everyone was first generation Protestant, so Catholic traditions of piety still flowed freely... a very interesting place!) Anyway, all this to say that this seems like such an interesting thing to write about and talk about, especially for the fact that it hasn't been talked about enough.

Oh, the "church outside the church" I study is the tradition of "Labor Temples" or "People's Churches." They mostly based liturgy off the Episcopalian liturgy (which of course does not say much), but generally they had greatly varying degrees of belief in Jesus as divine and Savior. Some of their members were much more Unitarian, and some were much more evangelical. Some were from formerly Catholic families. Some Quakers. All over the place, really. However, I find that the Labor Temple liturgy was only a step or two closer to "church" type liturgies than that practiced at the beginning and ends of some labor meetings (and Southern Tenant Farmers Union Meetings, and Grange meetings).
July 29, 2012 at 8:06 PM

Mark T. Edwards said…
Thanks Janine. Jenny Franchot's ROADS TO ROME (University of California Press, 1994) is great title on this subject for the nineteenth century.
July 30, 2012 at 5:11 AM