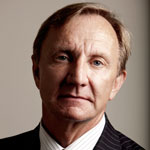 I first learned of  Richard Cizik by way of Bill Moyers's PBS documentary, "Is God Green."  At this point, Cizik was the chief lobbyist for the National Association of Evangelicals, making it his mission to warn fellow evangelicals about the dangers of global climate change.  The message of "creation care" resonated with some.  But for many with politically conservative leanings, Cizik had joined an "unholy alliance" with the political left.  Indeed, one time Cizik was on CNN alongside Jerry Falwell, who proclaimed that only "liberal Democrats, blue-helmeted UN types, and misinformed evangelicals" believe in global warming.

Cizik would be run out of the NAE, due in part to his environmental activism but also to his "evolving" views on homosexuality and civil unions.  He is now the president of the New Evangelical Partnership for the Common Good, "a faith-based organization committed to an agenda that fosters values consistent with an open and free society." And Cizik's name came up in the newest JSR Podcast with  Michael Sean Winters about his new book, God’s Right Hand: How Jerry Falwell Made God a Republican and Baptized the American Right. Specifically, I asked Winters to speculate as to whether or not a new political-religious movement might form around those sharing Cizik's views, similar to how Falwell molded the Moral Majority to the conservative forces of the 1980s.  You'll need to listen to the podcast to hear Winters's thoughts on the matter.

Winters writes for the National Catholic Reporter, where he also blogs at "Distinctly Catholic." In our conversation, he explains what compelled him to write this biography. Winters then discusses Falwell's early career, his rise to political prominence, his curious friendships with the likes of Larry Flynt, and his "mixed" legacy as it relates to American religious and political culture.

Also, just in case you missed it, a few weeks ago, Michael Pasquier spoke with Jeff Wilson about his new book, Dixie Dharma: Inside a Buddhist Temple in the American South. Wilson is Assistant Professor of Religious Studies and East Asian Studies at Renison University College, University of Waterloo, in Ontario, Canada. During this conversation, Wilson talks about his ethnographic and historical study of a Buddhist community in Richmond, Virginia. He provides unique insight into the pluralistic dimensions of religion in the contemporary South.
Email Post
Labels: art's posts buddhism Journal of Southern Religion new books religion and the environment southern religion