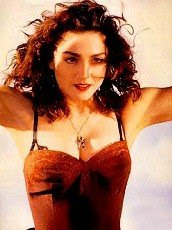 We all know that clothes matter. We try them and buy them; we comment on them; we wash them, iron them, fold them, organize and arrange them. We feel sad when they fit tighter and tighter (and by "we" I mean me). And of course, clothes are vital to religious presentations and identities. For those of us who use Madonna’s “Like a Prayer” video in our classes, we probably interrogate the difference of clothing between Madonna’s sleeveless and skimpy brown dress that highlights her pale skin and the cross on her chest and the full choir robe – red and black – that covers just about all of the skin of the main black female choir singer. In a video that challenges variants of white supremacy (including Klanish burning crosses and a legal system that seems to assume black guiltiness), clothing works to enhance white exposure and black enclosure.

Since clothing is a crucial part of history, religious studies, and cultural studies (and it should be a bigger part of economic history … consider how much time the little women of Little Women spend sewing and learning how to create button holes), I approached three of my favorite scholars in religious studies to consider the place of clothing. Below, S. Brent Plate (managing editor of Material Religion and author of Religion and Film), Pamela Klassen (author most recently of Spirits of Protestantism: Medicine, Healing, and Liberal Christianity), and Kelly Baker (author of Gospel According to the Klan: The KKK’s Appeal to Protestant America, 1915-1930) address the first of three questions on religion and clothing (the next two will follow later in the week).


Question: For someone who wishes to start analyzing the role of clothing in religious history, what secondary work should she or he begin with?


Brent Plate: For sheer range of things, The Berg Encyclopedia of World Dress and Fashion is certainly the most comprehensive collection on clothes, with many, many references to religious history. This, plus ongoing work on the topic, is available by subscription at http://www.bergfashionlibrary.com/


Alison Lurie's 2000 The Language of Clothes is still an intriguing read on clothes in general.


Kelly Baker: I found several works helpful in my approaches to clothing including Linda B. Arthur’s Religion, Dress and the Body (1999) and her edited volume, Undressing Religion (2000); Colleen McDannel’s Material Christianity (Yale: 1995), especially the chapters on Mormon sacred garments and t-shirts; Leigh Eric Schimdt’s article, “A Church-going People are a Dress-loving People” (1989 ); Pamela Klassen’s articles “Robes of Womanhood” (2004) and "Sacred Maternities and Post-Biomedical Bodies” (2001) and her wonderful Blessed Events (2001); Anthea Butler’s chapter on dress in her Women in the Church of God in Christ  (2007); and Paul Fussell’s Uniforms (revised edition 2002), which contained much to work against rather than work with; and Lurie’s The Language of Clothes, which Brent mentions.


For my theoretical apparatus on self, clothes and identity, I employed both Erving Goffman’s classic The Presentation of Self in Everyday Life (1956), especially the emphasis on dramaturgy, and Asylums (1961) on institutions and institutionalization. I am partial to literary scholar Elaine Scarry’s The Body in Pain (1986) on pain, bodies, imagination and artifacts. Sociologist Bryan Turner’s The Body and Society (2008) is very helpful too, as much of my interest is about the ways in which dress reflect collective and individuals values, which means clothes can conform, contradict, reinforce, challenge religious ideals, norms and values. We can’t “read” clothing as solely individual or collective, and these books helped me understand that complexity and my ability to interpret clothes for analysis.

Pamela Klassen: I find work that takes a “social life of things” approach to dress most interesting.  So, for example, there is fascinating research on the sari in colonial and postcolonial contexts, including a great article by literary scholar Nandi Bhatia that religion scholars might find particularly interesting for the way that it implicates Mircea Eliade in the Orientalist fetishizing of the sari in the West.


Like most research on dress, gender, and religion, Bhatia finds that women are especially marked by their clothing, and are often expected to carry what historian Marlene Epp has called the “banner of nonconformity” for the entire community.  In North America, we can see this gendered distinction among some groups of Mennonites, Amish, Muslims, Jews, and other religious communities—the men often dress to fit in with the dominant culture, the women dress to stand out.  (This is of course, not always the case, as Old Order Amish and some Orthodox Jews demonstrate).


Two other great resources that are theoretically rich and empirically layered are Carol Duncan’s discussion of head-ties and re-materializations of “Aunt Jemima” in her book on Caribbean-Canadian Christians, This Spot of Ground: Spiritual Baptists in Toronto and Marjorie Garber’s Vested Interests: Cross-Dressing and Cultural Anxiety.  Garber takes on religion, gender, sexuality, and race as just some of the vectors that one can “cross” with dress.


Sources:
Part 2 on Wednesday with answers to this question: "From your research, what’s the quirkiest or most interesting example of dress and its links to religious identities?"

Edward J. Blum said…
one of my favorite uses of clothing from a student came last semester when one wore a t-shirt that read "HEDONIST". In fact, this person was an evangelical Protestant who was using the t-shirt to try and initiate religious conversations
June 11, 2012 at 12:20 PM

Kelly J. Baker said…
Ed, your mention of the t-shirt reminds me of the wild world of white supremacist gear, including t-shirts that I encountered early in my Klan research. Maybe I should return to them?

Anyway, the t-shirt that caught my attention was one emblazoned with "Original Boys in the Hood" accompanied by images of Klansmen and a burning cross.
June 12, 2012 at 6:32 AM

Paul Harvey said…
Thanks so much for doing this, Ed, Kelly, Brent, and Pamela. Excellent discussion. If you have any hints on how not to dress like a tired middle-aged professor, those would be appreciated.
June 12, 2012 at 10:04 AM

Kelly J. Baker said…
No Hawaiian shirts, socks with sandals, or any item of clothing that has been in your closet since grad school :)
June 12, 2012 at 1:43 PM