Skip to main content
Labels
Posted by Paul Harvey May 15, 2012

I'm happy to introduce to you our newest contributor today. Rachel McBride Lindsey has recently completed her Ph.D. at Princeton University. Her current book project, based in large measure on her dissertation research, examines the material and sensory cultures of vernacular photography and nineteenth-century American religion. Welcome to Rachel!

As a graduate student writing on vernacular photography in nineteenth-century America, I’ve thought long and hard about the power of images as material artifacts over the course of the last several years. And as a mother of two young children, I’ve also thought a lot about boobs. Naturally, the recent Time magazine cover photograph of a twenty-something mother breastfeeding her three-year old son piqued my curiosity. The photograph has sparked a flurry of media attention, from an incredulous Saturday Night Live tirade to more nuanced reactions from self-professed “attachment” mothers who heartily disagree with Kate Pickert’s (the Time staff-writer who authored the relevant article) indictment of attachment parenting—Palo Alto Software CEO and mother of three Sabrina Parson’s article is particularly illustrative of the latter camp.

Although Time used the highly provocative image to shore up a critique of modern parenting, Jill Lepore of the New Yorker has demonstrated how photographs of breastfeeding mothers were used throughout the twentieth century to critique models of motherhood and were even an underrecognized genre of studio portraiture during the 1840s and early 1850s. 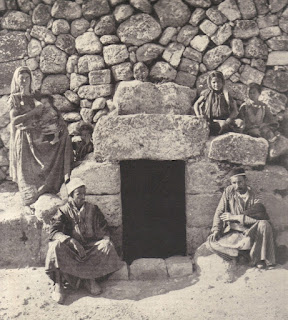 What strikes me as especially relevant for historians of American religion is the way that this latter genre both challenges our ideas of how photographs were used as practices of self-representation among this first generation of photographed Americans and, perhaps more relevant, how it brings to light the dual operations of presence and absence in studio portraiture. To her credit, Lepore is attentive to the daguerreotype—which she dates to about 1852—as an artifact that was likely worn on the body of its intended beholder. It was, in other words, not only a picture of a breastfeeding mother. It had a material existence outside of its iconographic symbolism. The unlikely daguerreian genre of nursing mothers reminds me of another genre that I have more closely examined in the course of my dissertation research, one which we might initially plot on the opposite end of the spectrum of portraiture but that in fact raises many of the same questions.

The seemingly incongruous image of an “utterly conventional” mid-nineteenth-century matron baring her left breast was matched in oddity by so-called “hidden mothers,” women who held their children on their laps while their own silhouetted figures—still conspicuously present—were blanketed beneath heavy fabrics. The presence in both kinds of images—bared breasts and hidden mothers—invites us to consider what they are concealing, or, more accurately, what our visual habits have concealed in the act of beholding. 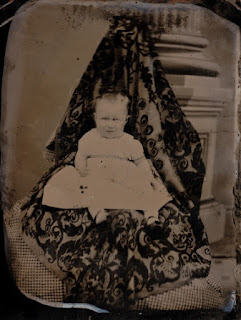 Boobs were also present in other, more conspicuously “religious” photographic archives during the nineteenth century. In a photograph taken by the St. Louis landscape photographer Robert Edward Mather Bain for a series of Holy Land views, the “Tomb of Lazarus” is framed by six figures, including a nursing mother. In the published editions of Bain’s photographs, commentators not once address the contemporary inhabitants of Palestine who populate the image, choosing, instead, to focus on the biblical imaginary that the photograph was designed to invoke. This interpretive silence was nevertheless broken several years later when Elmer Underwood, who along with his brother Bert (no joke) established one of the country’s largest stereograph firms at the turn of the twentieth century, wrote to his wife that in their photograph of “Lazarus coming out of his tomb at Bethany” the brothers “took Mary’s baby away from her in order to have her pose in the picture.” Breasts have thus long been charged icons of multiple kinds of presence—from erotic fascination to ethnographic distance to (each of which, by the way, were at work in the photographic archives of nineteenth-century American religion, often in concert). But an equally important question that these archives raise is what attention to these material icons as artifacts can tell us about both practices of representation and the visual habits of so many beholders.

Rachel Lindsey said…
The tintype of the hidden mother in this post, I should add, was graciously provided for my dissertation by a generous Flickr contributor. The original file can be accessed here: http://www.flickr.com/photos/gormer/6963356455/in/pool-1264520@N21.
May 15, 2012 at 8:21 AM

Kelly J. Baker said…
Welcome, Rachel! And thanks for such an interesting post on the current Time controversy over attachment parenting and, as you note, boobs.

esclark said…
The picture at the tomb of Lazarus in tandem with Kelly's comment makes me think about how American fascinations with the exotic (or more generally "the other") are often gendered. Interesting post!
May 17, 2012 at 6:53 AM