Skip to main content
Labels
Posted by Paul Harvey May 31, 2012

I'm happy to introduce our newest contributor today! Jonathan Den Hartog teaches at Northwestern College in St. Paul, Minnesota, up North in the land where, according to Garrison Keillor, "all the women are strong, all the men are good-looking, and all the children are above average." Although he can't speak for all Minnesota children, he will unabashedly affirm that his three undoubtedly are. Jonathan spends his research time thinking about religion and politics in the Revolution and Early Republic, with a special focus on the Federalists. He will be spending the coming year as the Garwood Visiting Fellow in the James Madison Program at Princeton University. He also maintains an interest in observing 20th and 21st century American evangelicalism, from whence this review grows.

With the recent discussion of novels, I thought I would contribute an extended comment on one that hasn’t received much notice.

Recently I had the opportunity to read an outstanding novel related to American Religion: Bill Svelmoe’s Spirits Eat Ripe Papaya. I haven’t seen notice of it in the blogosphere, and that’s a shame because this is a book that those who study or want an “insider’s perspective” on modern evangelicals should read. 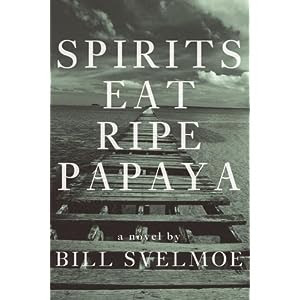 Set in the late 1970s, the novel takes Philip Andrews—raised a pastor’s kid but questioning his relationship to evangelicalism—and plants him at a missions school in the Philippines. At the school, Philip confronts both the high ideals of the missionaries (who serve with the “Bible Translation Mission”) and the realities of disparate humans living in close quarters. The experience prompts questions about the nature of faith in the modern world and the character of religious community.

Svelmoe (history, St. Mary’s College) knows of what he writes, even though we should be clear this isn’t a roman à clef. Svelmoe has experience on the mission field—in the Philippines, no less—as well as having plenty of opportunities to examine the oddities of modern evangelicalism.

The book has the ability to shift gears—quickly—from very funny to very serious. Some of the funny passages left me gasping for breath. Svelmoe’s description of the film A Thief in the Night will resonate with anyone who has ever sat through it. After someone at the mission made the scandalous mistake of ordering Fiddler on the Roof the mission returned to a religious film with Thief. Philip’s internal monologue satirizes the entire plot and sketchy production values, leading to his observation that “The Antichrist did not appear to be well funded, as his forces consisted of about five people driving second-hand vans.”

Even more uproarious is the fun Svelmoe has with a guest speaker at the mission, the Rev. Randy Rothooft, a Christian Reformed Church pastor who, after a Pentecostal experience, comes away a “Spirit-baptized pre-tribulation rapture dispensational Calvinist”—who also believes he is a prophet. This resulted in oddly phrased sermons, in which he challenged missionaries to sacrifice for Christ (while they sit ensconced in the middle of the Philippine jungle). The experience also encouraged his wife to write “evangelistic” songs, such as taking the Beatles “Hey Jude!” and modifying the words as the “outreach song” “Hey Jew!” (“Don’t keep bein’ bad/Take your sad heart and make it better/Remember to let Jesus into your heart.”)

And yet, the book is not only satirical. It has moments of beautiful description and serious reflections on weighty themes. Svelmoe is able to identify both the moving and the tragic elements of the movement represented by these missionaries far from home in a rather homogenous setting.

Svelmoe shows respect for the missionaries he writes about. He recognizes a real selflessness that would take individuals halfway around the globe to care for the bodies, souls, and cultures of indigenous groups that can give little in return. Further, as one character observes, these flawed missionaries are the only ones doing such works. Among the missionaries, Philip finds thoughtful individuals, true wits, and genuine piety. They reflect, at their best, a community that Philip aches to be a part of. Further, he finds this community at its richest at the Communion table. When this community becomes shut off, it truly is a matter of tragedy. Also, Philip finds a christocentric faith. Reading the Gospels carries Philip back to the focus on Christ, one of the wellsprings of traditional evangelicalism.

Demonstrating these positive aspects make palatable the very real criticisms Svelmoe levels at his characters. Philip in the jungle also finds rigid legalism, close-mindedness, and psychological and physical abuse. He encounters men who refuse to extend grace and worry more about hair length than state of the heart. In this community some “Big Sins” can create permanent lepers. Svelmoe thus describes these individuals as human and as (mostly) well-developed characters.

It’s due to this very human description of his dramatis personae that Svelmoe’s book seems like a great candidate for teaching. He portrays a decided religious community which will appear alien to many students, but he does so in a way that is comprehensible. The immediate ancestor of Svelmoe’s take has to be Shirley Nelson’s The Last Year of the War, which depicted a Fundamentalist Bible College in 1944. It’s not far removed, however, from Potok’s The Chosen, either. Svelmoe’s book could create an outstanding opening to talk about the mixed character of the foreign missions enterprise, and indeed about the mixed character of most religious endeavors.

This book will be well-served if it’s read widely, both by the heirs of the 1970s evangelicals depicted therein and by those seeking to understand the movement. And, Svelmoe’s readership will be served if he later continues Philip’s adventures after his days in the jungle.
Email Post
Labels: jonathan's posts missionaries religion and literature

jose said…
I'm a new blogger trying to start. I'm interested to exchange my link with you.

If you love the US History visit the new blog: http:\\theushistory.blogspot.com

Thanks! I'm happy to be here. I'll do my best not to lower the class level too much.