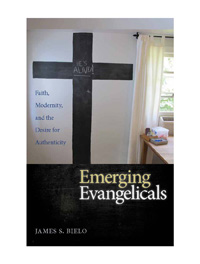 James S. Bielo, Emerging Evangelicals: Faith, Modernity, and the Desire for Authenticity. New York: New York University Press, 2011. $75.00 cloth; $25.00 paper. 256 pp.
James Bielo’s new ethnography, Emerging Evangelicals, is a welcome addition to the steadily-growing body of scholarly literature on contemporary American Evangelicals.  This work is exceptionally valuable, since it is among the very earliest scholarship on the “Emerging Church,” an intentionally amorphous group of (post-)Evangelicals.  Through fluid prose and descriptions of perfect thickness, Bielo’s most significant contribution is his demonstration of what it feels like to be an Emerging Evangelical.

Bielo describes his study as “an ethnographic analysis of identities fashioned, practices performed, discourses articulated, histories claimed, institutions created, and ideas interrogated in this cultural field” of Emerging Evangelicalism (5).  Moreover, this is a “person-centered ethnography—an ethnography focused on individual lives and intersubjective gatherings, not on any super-organic version of Evangelicalism” (27).  It is this focus that gives the book both its strength and its shortcomings.  It’s a fitting way to write about Emerging Evangelicals.  Rather than analyzing the movement’s seminal texts or constructing taxonomies into which he can emplace various groups, churches, and individuals, Bielo instead—drawing on “lived religion”—takes us inside the daily lives of house-church members, “new monastics,” “church planters,” and pastors.

Emerging Evangelicals de-convert from conservative Evangelicalism for a variety of reasons, foremost among them the perceived “inauthenticity” of conservative Evangelicalism.  Bielo’s subjects lament the commodification of Christianity, and their main project is to find a way to live “authentically.”  This means rejecting the tendencies toward philosophical modernism, suburban living, lack of connection to Christian tradition, de-emphasis of ritual, and, perhaps most importantly, the “consumerism” and “commodification” “embodied most clearly in the suburban megachurch” (35).

The thrust Emerging Evangelicals’ beliefs and practices is to escape this inauthenticity and embrace authenticity.  In so doing, they revive “traditional” practices like liturgy, which are mostly shunned by conservative Evangelicals.  Additionally, their focus is “missional,” defined as “being a missionary to one’s own society” (119), prompting many to dwell in urban areas, rather than taking the comfortable, easy, or often familiar path of suburban or exurban living.  Emerging Evangelicals instead often move back to the city in order to minister to the communities there, where they “map” their “mission fields” with crisp specificity and intentionality, and “plant” their churches and other organizations.

These efforts for authenticity provide the setting for Bielo’s most compelling stories and shrewdest analysis, as readers are allowed a peek into a world of multi-sensory worship experiences, contemplative prayers, liturgies, art-walks, blogging, communal living, and urban ministries.  The effective “person-centered” method takes us inside the daily lives of a married couple trying to maintain a house-church, an urban ministry seeking to change a neighborhood, and a young couple evaluating their decisions after finding a bullet lodged in the wall above their daughter’s crib.

Every review must include some criticism, and mine comes from the perspective of a historian.  Bielo takes some time, but not much, to sketch the historical underpinnings of the Emerging Church movement.  For this reason, the work sometimes lacks precision.  For instance, Bielo includes some “New Calvinists” who do share Emerging Evangelicals’ proclivity for church-planting, but fails to mention that New Calvinists spend a lot of their time talking about the dangers and “heresies” of the Emerging Church.  Additionally, readers not already familiar with certain names will be left to do most of the research on their own.  Bielo tells us that Brian McLaren, Doug Pagitt, or Donald Miller—and, more so, their books—are important, but very little about who these people are.  We hear about “new monasticism” and the importance of Shane Claiborne, but Bielo does not tell us that Claiborne studied sociology at Eastern University under Tony Campolo, which any historian of late-twentieth- and early-twenty-first-century Evangelicalism would find to be a salient and illuminating connection.  Similarly, the “Bart” whose urban ministry Bielo describes is Bart Campolo, Tony’s son, but Bielo doesn’t even hint at that fact.

Ultimately, these issues are probably an example of fidelity to one’s subjects.  Despite their relentless self-consciousness, Emerging Evangelicals don’t care about their own history or identity as “Emerging.”  Bielo writes, “Based on my three years of fieldwork, I do not expect that label to have significant longevity.  Many of my consultants expressed little interest, or outright disregard, for the label itself” (203).  Emerging Evangelicals are in search of the authentic, and the production of labels and “neat little boxes” leads not to “authentic Christianity” but to “consumerism” and “commodification.”  If “Emerging” is a brand, Emerging Evangelicals aren’t interested in it.  While the label may die out, Bielo wagers that “the problems Emerging Evangelicals have internalized and introduced into public discourse will powerfully shape American Christian subjectivities and institutions well into the future” (203).  Bielo has given scholars an engaging and insightful early description of what Evangelicalism looks and feels like for the generation of American Evangelicals who have grown up in suburban megachurches, reading Rick Warren and watching Joel Osteen, and have been left wanting “something more real, more genuine, more meaningful, more relevant, more honest, more biblical—something more” (31).

Last night I was chatting with some fellow graduate students and one student, himself an ethnographer, said, “Good ethnography is the new way to do lived religion.”  Upon reading Emerging Evangelicals, I think he may be right.
Email Post
Labels: emerging ethnography evangelicalism guest posts new books reviews

Curtis J Evans said…
Seems like a very good book. I wonder is anything said about the location of these emerging evangelicals. Are those who "deconvert" more likely to come from a particular region? Is the South more prominent than other regions? Or not?

esclark said…
In addition to questions Dr. Evans raised, it seems as though there could be a lot of interesting gender and whiteness discussions to be had about Emerging Evangelicals. Does Bielo get into those?
May 17, 2012 at 6:54 AM

DEG said…
Sounds like yet another good one to add to the pile of must read, especially alongside David Swartz's forthcoming book.
May 17, 2012 at 8:32 AM

Charlie McCrary said…
Dr. Evans, Most of the fieldwork was done in or around Cincinnati, with some in Michigan. Bielo doesn't really address region that I can recall. I'd say that since so much of emerging evangelicalism hinges on internet communities and blogging, it's not really bound by region too much. That's just my guess, though. Certain cities have larger emerging communities than others, but they don't seem to be located in any particular part of the country.

Emily, There are some comments on gender and whiteness, particularly in the secitons on church-planting. There was some interesting material about the necessity of actually living in the communities (mission fields) and being a part of them rather than a visitor or "colonizer." Gender dynamics are interesting, too, and they seemed to vary quite a lot among individuals.
May 17, 2012 at 6:16 PM

Or not. Perhaps it won't amount to squat.

With some 30K sects of Christianity today and Lord knows how many already extinct, I wonder what we should call the study of fads, of dead ends.

Is everything that ever happened "history?" If a fad rises and falls without making a damn bit of difference except to those who lived and died with it, what is that?

In the case of this Emerging Evangelicalism, we cannot call this "three years of fieldwork" anything but journalism. It isn't "history" exactly yet. Perhaps someday it will be the narrative proper. Or a footnote. Or perhaps not even worthy of the footnotes.

Mebbe these guys are like the Beanie Babies of Christianity, of which there have been many. Michael Servetus is really only important for having been burned up.

"Last night I was chatting with some fellow graduate students and one student, himself an ethnographer, said, “Good ethnography is the new way to do lived religion.” Upon reading Emerging Evangelicals, I think he may be right."

There's a poetry to that, Charlie. More art than science, perhaps, but art is very much worth studying and attempting to interpret in the greater sphere. If we're to do anthropology,

Emerging Evangelicals are in search of the authentic, and the production of labels and “neat little boxes” leads not to “authentic Christianity” but to “consumerism” and “commodification.”

tells us not only what they're for, but what in the "prevailing culture" they're reacting against-- which may give us a context or tell us a truth about the greater whole regardless of whether we're speaking of Beanie Babies or Pet Rocks.

IOW, the Shakers are interesting in their bizarreness, but getting to what made the Shakers shake is doing history, finding the truth of the whole.

Otherwise, we are just curating the Mutter Museum, chronicling man's confusions, as if we couldn't just start with this morning's paper.

Mike Clawson said…
Good review of an important work. I concur that one of the weaknesses of current studies of the emerging church movement (almost all of which tend to be sociological) is their lack of historical perspective or nuanced understanding of the differences and factions within evangelicalism. That's why my own dissertation work is focusing on the historical roots of the emerging church - asking the question what it is emerging from?

Mike Clawson
Baylor University
Department of Religion
June 2, 2012 at 8:25 AM