Skip to main content
Labels
Posted by Paul Harvey May 09, 2012

Grading 300 papers (ok, not that many, but seems like it) and moving 30 years worth of stuff out of a house (only to move back it in later this year after some renovations bankrupt me) will be occupying my attention for another week or so -- so I'm going to declare a blog "stay-cation" and we'll be right back with you with more blogging fun and games hopefully in a week or less. Perhaps in the meantime a few of our contributors here could put up some of their latest thoughts -- hint hint!

In the meantime, three little announcements and congratulations. First, congratulations to friend-of-the-blog Amy Koehlinger, the wonderful religious historian lately of Florida State, who will be loading up the truck and moving to Oregon State University in the fall -- we wish her all the best. Next, blog contributor Matt Sutton will be self-deporting just next year to Ireland on a Fulbright, so congratulations to Matt! Then, on a more permanent basis, my co-blogmeister Randall Stephens will be "self-deporting" to England starting next school year, to take a position as a Reader in History at Northumbria University! He will be making some heavy sacrifices to do so, being forced to take more salary for about half as much of a teaching load, and, even worse, being dragooned into taking a sabbatical next fall during his first semester there. Somehow, I think he'll be able to put up with all that to join a department that includes some stellar younger scholars in American history. Here's the announcement, in Randall's own words: 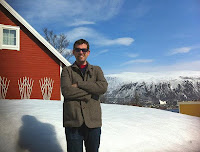 Hello friends, colleagues, family, facebookers: Just a note to let you know that I've accepted a position as a Reader in American Studies and History at Northumrbia University, Newcastle, UK. Really excited about this new job and all it promises. For those who don't know what a "Reader" is, here's a bit on that: http://en.wikipedia.org/wiki/Reader_%28academic_rank%29


Congratulations to Matt and Randall! Back with you soon, as soon as I answer all those urgent messages from students who have discovered that a D on your senior thesis project really messes with your graduation party plans.
Email Post
Labels: grants and fellowships Randall Stephens randall's posts

Matt Sutton said…
Randall--have the Nazarenes (and Al Mohler) driven you from the country? Once again, the faithful can send their kids to ENC with confidence.
May 9, 2012 at 12:14 PM

Randall said…
I'd like to think that the amazing weather of northern England has drawn me overseas.
May 10, 2012 at 7:57 AM

Amy (and Rob, Hannah, Zack) said…
How lovely to take a break from packing-up my house this morning to check-in with RAH and find mention of my move. Thanks to Paul (from one person surrounded by moving boxes to another) and all who have offered kind words. I'm beyond happy about my new position and about moving my family to the most beautiful place on earth. And congratulations to Randall and Matt--and also to John Turner who I just heard is headed to George Mason.
May 10, 2012 at 8:55 AM