Sword of the Spirit, Shield of Faith: A Review 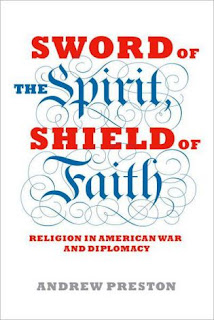 I received two packages in the mail last week. One was a box of Brooks Brothers oxford shirts, the other was Andrew Preston’s much anticipated Sword of the Spirit, Shield of Faith: Religion in American War and Diplomacy (Knopf, 2012). The boxes were nearly the same size. At six hundred thirteen pages of text, this hulking book offers a sweeping narrative of religion’s role in American foreign affairs. “It is difficult to think of two subjects that have shaped the United States more than religion and foreign affairs, and it is difficult to find two bodies of literature that are as large, diverse, and controversial,” Preston observes. Religious history is subject to an expansive and frequently overwhelming literature which often crosses scholarly disciplines. Foreign affairs are informed by limitless perspectives, and the trend toward interpreting ‘globalization’ only encourages a more sophisticated scholarly literature.

The title is appropriately taken from St. Paul’s epistle to the Ephesians, instructing them to wield the “sword of the Spirit” and to carry the “shield of faith.” Preston reminds us that Americans have consistently used this kind of prophetic language; the sword to justify war, the shield to promote peace. Too frequently, scholars have examined the sword and its attendant rhetoric, “the stuff of providence, manifest destiny, a New Jerusalem, and a shining city upon a hill.” The shield has promoted peace, and Preston successfully incorporates it into his scholarship, illustrating how pacifists and opponents to wars have acted as a counterpoint in American foreign affairs.

The book seeks to resolve the presumably incompatible topics of religion and diplomacy. A previous generation of historians rarely acknowledged religion in American political history, usually excusing it as ‘paranoia’ or ‘status anxiety’ of the far right. Diplomatic history was a noble profession steeped in hard facts and reason, and religion was simply on the fringe. Drawing upon emerging scholarship which approaches religion seriously, Preston contends that religion has “acted as the conscience of U.S. foreign relations.” While it does not claim to offer a new definitive history, Sword of the Spirit, Shield of Faith suggests that “cultural habits” repeatedly shaped America’s understanding and interaction with the world. Originating in the colonial period, religious and civic ideals informed these assumed cultural habits and contributed to the rhetoric of American foreign affairs throughout the nineteenth and twentieth centuries.

We are told in the introduction that the book will assess “America’s engagement with the wider world, including the overseas efforts of private citizens, missionaries, and other nongovernmental organizations, in addition to the use of diplomatic and military power.” Preston intends to examine the interplay between the bottom up pressure from religious people and organizations and the top down personal piety of political leaders. Yet, one quickly senses the author’s intent is not so much to reveal lesser known historical voices, but to reflect on the powerful men who influenced foreign affairs. There are numerous examples of movements and people who persuaded political decision makers, but Preston relies on national political figures to narrate most of the book.

Sword of the Spirit, Shield of Faith revisits many of the familiar men, whose moral vision guided the nation’s foreign affairs, including Jonathan Edwards, Thomas Jefferson, Abraham Lincoln, William Jennings Bryan, Theodore Roosevelt, Woodrow Wilson, and Jimmy Carter. Preston offers some insightful remarks on figures who received less attention, but who shared strong religious convictions and a sense of civic duty to promote peace and justice. A compelling chapter entitled “John Foster Dulles and the Quest for a Just and Durable Peace,” examines Dulles’s collaboration with mainline Protestant liberals during World War Two. Deemed “the most influential layman in the world,” Dulles was the son of a Presbyterian minister and staunch cultural Calvinist, but he was also a modernist who believed in an ecumenical internationalist church, a movement at its peak during his later political career. Preston contends that “Dulles placed Christianity at the very heart of his worldview, and thus at the center of planning for the postwar world.” In 1940 he was nominated to head the Federal Council of Churches’ Commission on a Just and Durable Peace, where Dulles used the position to advance his own views on foreign policy. The FCC released a book in 1943, Six Pillars of Peace, which was intended “to improve upon the generalities of the Atlantic Charter and the Four Freedoms by laying out the essential principles that would need to form the core elements of any postwar system.” Dulles and fellow mainline churchmen pressed President Franklin Roosevelt to enact their vision for a lasting peace. The committee eventually participated in one of the first UN charter meetings with the U.S. delegation, where four of its nine proposals were adopted. “Rarely had religious lobbying been so effective, or so consequential,” Preston concludes.

Unfortunately, Professor Preston has employed civil religion to analyze American political history. Politicians and average citizens have presumably bought into the idea of civil religion and all its attendant rituals, language, myths, symbols, and virtues. Although there is no “official hierarchy in American civil religion,” Mr. Preston contends that “the president is its de facto pope.” As the American presidency garnered symbolic importance, so too did the rhetoric of nationalism and civil religion. The difference between the two is unclear, but civil religion expanded throughout the early twentieth century to include Protestants, Catholics, Jews, creating a ‘Judeo-Christian’ consensus. Readers familiar with the work of Will Herberg will likely find this a foregone conclusion, but Preston subtly traces the gradual inclusion of Catholics and Jews into America’s mainstream religious establishment. This phenomenon certainly had a dramatic and resounding influence upon American foreign affairs, and its consequences remain imbedded in our diplomatic policy.

The use of civil religion, however, fails to explain the process of historical change and readers are left with the sense that politicians have pontificated on lofty themes, while the rest of us listen in the civic pews. Americans have certainly disagreed on war and peace, and Preston comprehensively assesses the contentious dialogue between religious groups and politicians in the public sphere. But, there are more vignettes into political history than a thorough explanation of how cultural themes, civic values, and religious ideas have impacted the evolving dialogue over foreign affairs. The blurred distinction between nationalism and civic religion weakens the overall argument and is a surprising departure from intellectual and political history.

Concern over civil religion is tempered by Professor Preston’s sensitive appraisal of the moral dilemmas inherent in politics and religion. The temptation to proclaim moral superiority, whether in brandishing the sword or the shield, has often yielded hubris and occasionally perished into disillusion or mere complacency. Sword of the Spirit, Shield of Faith challenges readers to consider how moral foresight, or the lack thereof, motivates our own impulse to create a better world and fulfill American liberal ideals.
Email Post
Labels: blake's posts civil religion religion and civic life religion and foreign policiy religion and politics war

Ben P said…
Thanks for this. I've bumped into Andrew a few times out here in Cambridge, and he really is a gentleman along with a wonderful scholar.
April 17, 2012 at 6:44 AM