Here is the press release for a new book from Bob Cornwall, a pastor in Michigan, blogger, and reader/friend of the blog. 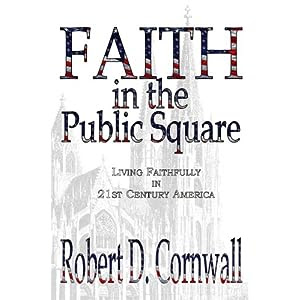 Decades ago a Harvard professor wrote a book entitled The Secular City, suggesting that America was moving into a new secular era, but in spite of claims that the public square is naked, religion continues to make itself felt in public life. Although many continue to push religion into the private sphere, there’s no evidence that this effort is succeeding. The secular could be domesticating the sacred, but the sacred remains present. If this is to be true, then how should faith express itself in public?

In his foreword to Robert Cornwall's book Faith in the Public Square, Mark Toulouse responds to philosopher Richard Rorty’s claim that religion is a conversation stopper and thus must be kept private. Toulouse suggests that Rorty’s view of religion is distorted, though perhaps with good reason, because "he believes that religion can only speak in one way, the way that stops a conversation. But religion is far more complex and multifaceted than such a view would indicate. The damage religion can cause in public is when it enters in such a way as to claim sole ownership to the truth, and then seeks to legislate its view of the truth so that it affects the rights of others, whether at home or abroad." In Faith in the Public Square Cornwall attempts to provide a model of conversation that opens dialog rather than closes it.

Cornwall brings together in this book a representative sampling of columns published by Lompoc Record from 2006 through 2008. Cornwall wrote them while serving as pastor of a Disciples of Christ congregation in Lompoc, California. Appearing on the Sunday Op-Ed page, rather than being relegated to the Friday church page, the author sought to use these essays to address important social, political, and religious issues, from the perspective that was formed by his Christian faith and his involvement with interfaith and social justice movements. The columns, now published with an introduction, appear largely as they were first published, though updated as necessary, so as to broaden the conversation in the present.

So, can a person of faith be involved in the public square with integrity? Is public policy made better by this action? Can faith remain whole and genuine following the encounter? Read these essays to discover the answers, and perhaps find a new optimism for the future as you do.
Email Post

Robert Cornwall said…
Thank you Edward for sharing this!! I hope that readers will find it a helpful resource for engaging in helpful conversations on an important issue.
April 20, 2012 at 1:38 PM

Derrick Coy said…
This sounds like a book I will enjoy reading. It reminds me of the disciple denying Jesus. How can believers shy away from public spaces, even if it might stop a conversation? In fact, religion should open conversations.
April 20, 2012 at 8:51 PM