Frequencies and the Aesthetics of Spirituality

Theologians. They don't know nothing. About my soul
-Wilco

Frequencies, the collaborative genealogy of spirituality curated by Katherine Lofton and John Modern, has become quite a brand across the religion blogosphere. The folks at the Immanent Frame have been posting a series of reflections on the project and its 100 entries ranging from chicken sandwiches to iPhones to my own adviser writing about LSD. The posts themselves are remarkable and the reviews have been excellent as well. I especially appreciated the bitchy essay from Martin Kavka and the musical musings of Jason Bivins.

The most striking thing about Frequencies in my eyes is its beauty. There are moments of wonderful prose, yes, but the collection is striking to gawk at on the screen. More than that, Frequencies has its own aesthetic. So, I have one question for Frequencies, a question I don't see anyone asking:

What happens if we take the same text, the same objects in the collection, and reframe them? What if Finbarr Curtis's essay on his father and the American Dream appeared surrounded by patriotic kitsch instead of smooth lines and a beautiful piece of art? What if Patton Dodd's thoughts about evangelical Eugene Peterson looked like they were posted by a Sunday School teacher and Gary Laderman's history of LSD looked like a Deadhead blog? Would we still see these objects a spirituality? How would the meaning of these texts shift in a different aesthetic? How much of the spirituality resonating through Frequencies is in its aesthetics? It just looks like spirituality--doesn't it?

Compare Frequencies, the genealogy of spirituality, with the American Academy of Religion's website. The AAR is the institutional hub for the study of "religion"--that thing that spirituality is so often not--and its website stands in stark contrast to Frequencies. So much news and so many menus. You have to scroll down a page with the colors of doctor's office wallpaper. Or, to go to a paragon of institutional religion, look at the Vatican. A brown background? A giant picture of the Pope in the center around which myriad links to various departments and documents circle. Look at Christianity Today. So much stuff. So many pictures. It's just so complicated. Now go back to Frequencies. There are no resonances with those other sites. They are on a different aesthetic wavelength. Frequencies has no institutional news, no leaders, no sidebars and frames. It is clean and sleek. It is spirituality--right? 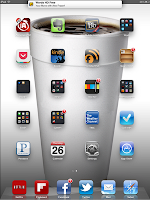 Now, look at Apple. The iPad sits in front of you like the hamburger in a Hardee's commercial.  The menu across the top is full of one word options and there's not much to scroll down to. It's all right there in black, white and gray. It's clean and sleek. Now I understand why the image of a cup of coffee illustrating Adam Frank's "science" entry fits so well as the wallpaper on my iPad. There are resonances between Apple and Frequencies--they share an aesthetic wavelength.

Art plays a big role in Frequencies, illustrating many of the entries. The artistic resonances emerge when we look Frequencies alongside the Metropolitan Museum of Art. MoMa is clean with big pictures and simple menus of black and white. The menu items are verbs: visit, explore, learn, support, shop. Frequencies asks you to seek. There are resonances.

I keep wondering about the musical resonances of Frequencies. It's metaphors invoke sound--frequencies, tune in, wavelengths. Yet it is a startlingly silent website. What is the soundtrack for Frequencies?

I started this post with a Wilco lyric. Check out the cover to that album on the right. A Ghost is Born could be the soundtrack to Frequencies (listen to "Handshake Drugs" while you read  Luís León's "cannabis club" entry). The cover fits right in with the artwork and feel of Frequencies. A simple egg. White on white with grays and black, while Jeff Tweedy doubly negates theologians. Again, resonances. We could look to other bands for other resonances. Who else might offer the audio for Frequencies words and images? Maybe Arcade Fire? How about Bon Iver? It might be a stretch, but how about Lana Del Rey? Who do you think of? Resonances?

Apple, an art museum, and indie rock, what does this all point too? What is this aesthetic wavelength we've tuned into? What do all these resonances mean? (All due respect to John Corrigan's "meaninglessness".) I think they point to two things. First, these resonances point to the cultural location of Frequencies within the American middle brow--that space of public radio, iPads, indie rock, the Atlantic, and SXSW. Some of its contents such as automatic writing or This American Life come from and appeal to middle brow America. Meanwhile, the aesthetics of the site and the inclusion of these objects alongside others like Eugene Peterson or Chick-Fila lift these "lower" objects up as spiritual and middle brow. Putting "Eugene Peterson" into the format of a poorly constructed webpage with Jesus fishes down the side highlights the ways Frequencies engenders spirituality in the mundane. Eugene Peterson is spirituality in sleek design next to LSD and A. C. Bhaktivedanta Swami Prabhupāda. Put him in Comic Sans Serif font next to a Zondervan NIV Bible and a set of Precious Moments figurines and he's just evangelical.

This leads to the second point. When Frequencies claims to be a genealogy of spirituality it also admits to being part of the spirituality family--a family located within middle brow culture. To me the project is less of a Foucaultian genealogy and more of an Ancestry.com genealogy. It is the grandchildren and great grandchildren tracing out their lineage. There are resonances across the middle brow cultural spectrum, from high end consumer electronics to MoMA to indie rock, because they too are all children in this great family of spirituality. They all share similar cultural DNA that we could trace out historically if we tried. Frequencies is not just a catalog of culturally middle brow spirituality, it is a child of  culturally middle brow spirituality.

Yvonne said…
Very nice review, thanks. But something else is going on here. I wonder WHY Religion scholars (like myself) MIGHT feel drawn to express ourselves on a "spirituality" blog? It's not as though this is service writing for our profession, nor is it research publishing in any strict sense. Is this about an expression of community, or is it just so that some of us can hang out with the cool kids?
April 30, 2012 at 7:51 AM

Kelly J. Baker said…
Mike, what do you think about Yvonne's point about the "why" of this kind of practice? I plan on writing about Frequencies once my semester ends to ponder what is at stake in the positioning of the "I" in many of the posts. So, why are folks writing? And more pointedly, why does writing about spirituality lend itself to writing about one's self?
April 30, 2012 at 8:21 AM

Unknown said…
This is insightful on multiple levels, Michael, so thanks for sharing. I had similar reactions as yours, but for me my fascination with Frequencies was less about aesthetics and more about generations. The kitschy websites you created are not only alternative presentations of Freqs, but presentations circa 1990s web design. All that was missing was a scrolling banner or blinking text. While you're right that Freq's curators and contributors fit within a recent lineage of turn of the century middle-brow spirituality, this attention to chronology is also an observation that the people engaged in Freqs are a new generation of scholars embarking on an endeavor previous generations of scholars have not considered, nor were able to explore. I raise this because while scholars of religion have taken over the blogosphere, they are less prevalent in broader discussions over the skyrocketing importance of digital methods and technologies in humanistic inquiry. (The Journal of Southern Religion is a notable exception here, but my criticism of that fine endeavor is that it vastly underutilizes the digital medium, simply reproducing a traditional journal with all of its limitations on the web.) Freqs, I think, is a powerful call to get religious studies involved in the digital humanities. It makes collaboration, creativity, and aesthetic design just as much a part of scholarly argument, interpretation, and production as the text itself. (I'd note we've been doing this for centuries with the monograph, we just haven't talked about it.) For what the digital humanities ultimately challenges us to consider is that the trappings of "knowledge" the West has been obsessed with since the Enlightenment are features associated not necessarily with knowledge but with the printed word. Digital projects such as Freqs--and hopefully many, many more to come--highlight the role of presentation, visualization, etc. as sites of knowledge production…..a very Foulcaldian genealogy.

And no discussion of the academy and hipster culture would be complete without considering Lit Folks are Hip: http://litfolksarehip.tumblr.com/

Randall said…
I have to dissent on the Wilco business. They're about as hip as an NPR totebag or a Starbucks coffee t-shirt. They've become dadrockers with three-day's growth of facial hair. Of course, there is a story about Wilco usually every other week on NPR, so there is a link there. Wilco's charmless, hookless music holds about as much appeal for me as a Reader's Digest condensed book.

I think of hip today as having more to do with kitsch weirdness of Glo-fi and the screwed up retro business of Ariel Pink's Haunted Graffiti http://www.myspace.com/arielpink

Anonymous said…
The Frequencies web site is attractive, I guess, but... it uses a ton of bandwidth and it takes forever to see what the stories are. I'm not an academic; I'm a local pastor trying to find resources for the congregation I serve. This site is clearly not designed to be interesting to lower middle class moms and dads struggling to make a living and raise their kids, much less single parents... it's the sort of thing to which I might point the hip young city folk I know. That's good, it's just not the crowd I'm working with.
April 30, 2012 at 11:44 AM

Anonymous said…
Very interesting to think that there are pastors out there thinking Freqs is a resource for congregations!
April 30, 2012 at 12:05 PM

Randall said…
The fake websites are brilliant. They illustrate the point. Look a little like Borat's site, with all it's colors, flashing and animated gifs.
April 30, 2012 at 2:07 PM

Michael J. Altman said…
Thanks for all of the great feedback, everyone.I have to give some credit to DEG because I ran this idea by him and he encouraged me to go through with it.

Yvonne, I think different folks wrote for different reaosons. I know a few of the authors and have talked with them about it. Some wanted a chance to think of their research interests from a different perspective. Others thought it would be a fun sort of writing and a change of pace from the usual. I'm sure the social dynamics of academics also played into it at some level. I do think that all of the moves to bracket or locate oneself often cut off any personal or confessional voice in our academic writing, as it should. Perhaps Frequencies provides an outlet for pent up confessions. I'm not sure. Kelly, I look forward to your take on this question.

Randall, I see your point about Wilco but I wonder if spirituality isn't sometimes "dadrockers with three-day's growth facial hair." Isn't spirituality both cool and always already passé? We can add Toro y Moi to my list of bands to help balance it out.

I think the anonymous pastor summed up my entire point with less words and a more powerful example.