It's a happy coincidence that I got my brand-spanking-new paperback copy of Darren Dochuk, From Bible Belt to Sunbelt, on the very day that I learned that the book (which as a dissertation won the Allan Nevins Prize, and as a book previously won the AHA's Dunning Prize -- biggies, both) was just awarded the Ellis Hawley Prize of the Organization of American Historians. Some high honors indeed for the former volleyball star from the Great Plains of Socialist Canada. 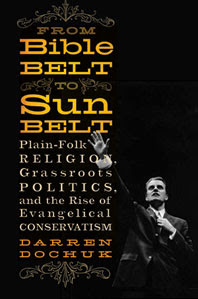 PH: Darren, how does a volleyball star like you from the Great Plains of Socialist Canada end up studying and writing this massive book about conservative southern evangelicals in twentieth-century California? Take us through some of your professional trajectory that got you to this book.


DD: The Great Plains, Socialist Canada, and volleyball may have had something to do with my obsessions. As a kid growing up in Alberta, I had a warped fascination with all things American; I read more about George Washington than John A. Macdonald, I loved U.S. college football, and my family’s annual vacation usually took us south (Edmontonians don’t drive north unless ice fishing or moose hunting are in order). South meant Southern California, a place where we could escape the Great Plains tundra for beaches and Disneyland. It wasn’t uncommon for us to use some of the 30 hours of driving time to debate why Americans hate government so much and Canadians don’t think it’s so bad. Then, while playing university volleyball, I had the chance to compete against California programs I followed as a high schooler. I had the best match of my career against the Pepperdine Waves, despite being heckled by some brutally tough fans. So perhaps the book can be boiled down to catharsis—some subconscious attempt to reclaim (or maybe purge) a familiar past…but I’ll leave that up to my sister psychologist to figure out.

The “professional trajectory” can be summed up more simply. While struggling to find a Ph.D. dissertation topic, I read (and loved) Lisa McGirr’s Suburban Warriors and thought more could be done to explain Southern California conservatism, so I set out to do it. My goal was to write a book that embedded evangelicalism in the larger story of post-1930s politics by teasing out its connections to suburbanization, political economy, race relations, and the politics of labor, education, housing, and business. I wanted to thread evangelicalism into mainstream narratives of U.S. political history, which still tend to paint evangelicalism as a sideshow.


PH: I read somewhere, on another online interview I think it was, that in part this book is a response (and historical critique) of the "What's the Matter with Kansas" thesis, which of course holds that a fair number of Americans have been effectively snookered into voting against the own material economic interests by forces which have sold them on a falsely cultural populism. Am I right in seeing this book in part as a response, and if so, how so?
DD: I didn’t set out to address Frank’s thesis, but my book touches on a few of its themes. At the least, it tries to add a layer of complexity to Frank’s notion that Main Street populists have been “duped” by Wall Street corporate types into voting against their economic interests. First of all, the “duped” motif has its limitations. Some of the Wall Street types I include in my story could be classified as evangelical populists themselves whose own politics covered a range of issues beyond their pocketbooks; economic interest wasn’t their sole interest. And many of the Main Street types I talk about continually measured their economic interests against the “culture wars” agenda they’ve purportedly been spoon-fed from above, so to say they were snookered into doing something against their wellbeing shortchanges their own capacity as rational political actors.

Along this same line, I think Frank’s provocative critique also downplays the processes of negotiation that have taken place between Wall Street and Main Street over the past half-century. The people I talk about were embroiled in a struggle against liberalism that started much earlier than the culture wars of the 1960s and 1970s, and the alliances they forged to fight their battles were not static, uncontested, or permanent. The Main Street evangelicals I write about were never perfectly or entirely or always willing to do Wall Street’s dirty work in the trenches, and the evangelical businessmen I talk about sometimes acted on behalf of their rank-and-file brethren in ways that defied fiscal logic.

And ultimately, I’m hesitant to say someone is voting or acting against their best interests, as if I have some deep wisdom they don’t; I can’t even figure out what my own best interests are, let alone someone else’s, so I’m not that eager to pass judgment.

PH: The people you study didn't wait around for Rand Paul or the contemporary Tea Party to develop a pretty deep-rooted antipathy towards the New Deal and the expanded state that came out of the New Deal. Ironies abound here, of course, since the processes set in motion by the New Deal brought many of them to California in the first place. When did the subjects you study come to distrust the New Deal state, and how did they get to that point given their origins as poorer folk who were supposed to be one bulwark of the New Deal coalition? What role did religion play in that critique?

DD: I don’t think the people I study ever truly trusted the New Deal state. They certainly relied on it during times of trouble and they believed it was their right as white American citizens to do so; however contradictory or not, they thought that the federal government had a responsibility to provide short-term aid in exceptionally bad circumstances, and be the last resort in times of need. Roosevelt came through for these citizens, and they returned the favor by supporting him. But their first choice was always a limited state; as soon as times got better, Washington, they believed wholeheartedly, was to move aside.

When government didn’t move aside, they got angry. Their anger was politicized right after World War II, during the labor wars that erupted in the defense plants and neighborhoods that had lured them west.

Amid post-war adjustments, when California’s Social Democrats pressed for an active government that would support industrial unionism and race reform—for an expanded New Deal, in other words—southern evangelicals attempted to protect their interests as white workers and homeowners through a movement called Ham and Eggs, which combined calls for Christian revival and morality with a championing of the independent producer. This was William Jennings Bryan’s (and Huey Long’s) Populism reborn, and it scared Social Democrats, who believed that Ham and Eggs was irrational and racist. Ham and Eggs failed, leaving liberals in charge of California’s Democratic Party and evangelicals convinced that a coordinated assault on “big labor” and “big government” was in order. It’s in this moment that they began recasting Roosevelt and the New Deal as twin evils that had allowed socialism to creep in to American society.

It’s also in this moment that they began shifting their party affiliation to Independent and Republican. Evangelical businessmen, who at the time were helping form an anti-statist/free market movement, urged their fellow churchgoers along in this thinking. These sides would unite in the 1950s thanks, in large part, to Right-to-Work campaigns, which sought to rollback the power of unions in the workplace (sound familiar?).

PH: It's rather amazing to me that in reading your book alongside Bethany Moreton's To Serve God and WalMart, two previously obscure tiny colleges in Arkansas - John Brown University and Harding University -- have suddenly become central to the narrative of twentieth-century religion and conservatism, and hence to the entire narrative of twentieth-century American politics. As far as California higher educational institutions go, only Pepperdine plays as central a role in your book. Tell us something briefly about those two institutions, and what role they play in your book

Funny thing is, Bethany and I met in the one-room archive of John Brown University, tucked away in the foothills of the Ozarks. We were told that no researcher had visited in quite some time…yet there we were, two dissertators from “up north” eagerly flipping through files and splitting time at the photocopier.

The reason we were there is because we recognized that evangelical institutions have rich stories to tell. Historians often focus on preachers and the pews when tracking the evangelical Right. But a much thicker history of this phenomenon emerges when we follow the money trails that link evangelical schools to their patrons (highly politicized businessmen), or read between the lines to see how a college’s pedagogy endorses certain political expressions.

So, for instance, John Brown University and Harding University wrapped their pedagogy in a curriculum (“Head, Heart, and Hand”) that stressed practical education in the trades and business, full immersion in boots-strap entrepreneurialism, and staunch defense of traditional family values. These schools’ founders saw that this curriculum as a counter to the liberal elitism of the Ivy League, and the only answer to society’s “socialist” drift. Like countless other southern colleges, these two schools were near financial collapse in the 1930s. To save themselves—and preserve their independence—they approached the nation’s most powerful (and often evangelical) corporate leaders for support and got it, with the promise that they would train the next generation of evangelicals in a corporate-friendly environment. During the Cold War, as public education expanded and private schools faltered, John Brown, Harding, and their peer institutions stepped up their search for corporate help, by hosting annual “Freedom Forums,” for instance, which gathered CEOs, educators, and activists from around the country. In reaching out in this way, at such a formative moment in American political development, these schools essentially became the conservative movement’s first “think tanks” and marshaling zones.

I think a second benefit of studying these schools is the way they account for regional change in the post-Depression era. One of my book’s goals was to track the emergence of a Sunbelt axis of power—of the kind Kevin Phillips and Kirkpatrick Sale first designated in the 1970s as spanning from California to the Carolinas. Scholars have debated the strengths of the Sunbelt thesis, with detractors often stressing important differences in Atlanta, Houston, and Los Angeles’ metropolitan politics, or the disjuncture between notions of citizenship in Oxnard, California and Oxford Mississippi as reasons to jettison the concept. I think the Sunbelt concept is useful, and one way I saw it play out was in the realm of evangelical higher education. The more I dug the more I became fascinated with the way these schools (as well as west-coast ones like Pepperdine) linked the futures of the South and West through institutional channels, laying the groundwork for a broader, Sunbelt powerbase. Critics of the Sunbelt thesis claim that their research on urban development doesn’t bare the burden of this concept, but perhaps they should look to simpler data for evidence—bank statements for Christian colleges, which demonstrate Californian, Texan, and Floridians’ shared investment in places like John Brown University, or school enrollment books that track the flow of teens from Tulsa to Los Angeles, Orange County to the Ozarks—teens with last names like “Harvey."
Part II of the interview is here.
Email Post
Labels: author interviews evangelical conservatism evangelicalism migration regional religious traditions religion and economics religion in the american west

Edward J. Blum said…
congratulations to Darren. Religious history sweeping so many awards!!!
April 27, 2012 at 8:27 AM