Asian Religions in America as an Ngram: Hinduism, Buddhism, and the Rammohun Spike 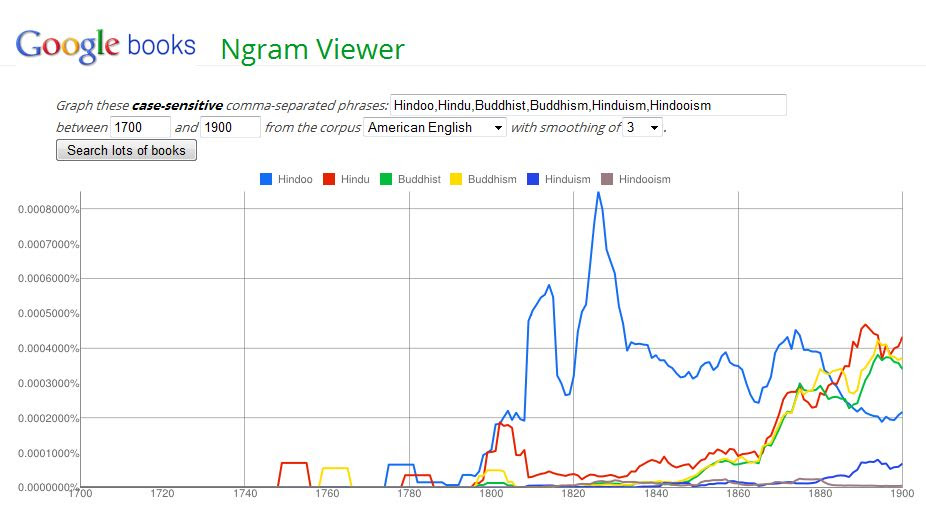 By Michael J. Altman
I decided to play around with Google's Ngram viewer and see what it might tell me about how Americans wrote about Asian religions. Click here for a bigger version of the graph. Here's what I noticed:
1. The most popular moment for Asian religions in America was in the 1820s and it most likely revolved around the figure of Rammohun Roy the "Hindoo reformer" highly covered in Unitarian and evangelical missionary journals. His debates with the English Baptist missionaries at Serampore, just outside Calcutta, and his publication of the Precepts of Jesus attracted a lot of attention in America. He wanted to eventually come to the United States but died in Bristol, England while touring Britain before he could make it. There's a lot more to be said about Rammohun but I'll let the spike speak to his importance and refer you to my dissertation that should be done early next year for more details.

2. The spike in "Hindoo" before Rammohun matches up with the beginnings of the American missionary movement. The first missionaries were ordained by the American Board of Commissioners for Foreign Missions in 1812 and went to India and Ceylon. What I can't explain is the dip between the missionaries and Rammohun.

3. Looking further down the timeline, it is interesting to note the way "Hinduism" never gets close to the same frequency as "Buddhism" while "Hindu" keeps pace with "Buddhism" and "Buddhist." This proves an important point made by writers, most notably Tomoko Masuzawa in her book The Invention of World Religions, that Buddhism was accorded more authority as a "world religion" than Hinduism during the nineteenth century. This graph shows that Americans took interest "Hindus" and "Hindoos" but that they didn't give"Hinduism" the status of full fledged religion. "Hinduism" was not discussed as frequently as "Buddhism" because it was seen as less important and less legitimate religion. "Hinduism" does get a bump after 1893, most likely from the arrival of Vivekananda. Nonetheless, there is a lot of writing about Hindus but not much about Hinduism. It seems Americans wrote more frequently about the figure of the Hindu than the overall religious system. Meanwhile, Buddhists and Buddhism got equal treatment.

There are certainly caveats to the accuracy of this method and the use of Ngrams in general for historical work. That said, I do think that there are places where graphs like this can corroborate other more traditional forms of historical evidence. The "Rammohun spike" seems fairly plausible to me. For those of us interested in the history of religious concepts and categories in American culture, the Ngram can be a great jumping off point for theorizing the relationship between culture and discourse. It's one more tool for whacking away at the stubborn rock of history in hopes of chiseling out something meaningful.
Email Post
Labels: 19th Century asian american religion buddhism digital humanities hinduism michael altman's posts missionaries Rammohun Roy unitarians Vivekananda

Carol Faulkner said…
Fascinating post! I wanted to reply earlier but didn't get the chance. Did evangelicals and unitarians have different perspectives on Hindus/Hinduism? This topic came up fleetingly in my research on Lucretia Mott. In the 1820s, Hicksite Quakers (or future Hicksites) criticized evangelicals for subjecting "Hindoos" to "political slavery" and "religious domination." Later, the Free Religion Association heard papers on Keshub Chunder Sen. In 1906, the FRA memorialized Roy and Sen (along with Mott, Emerson, Parker, and other familiar figures) as "Prophets of Liberalism."
March 25, 2012 at 10:39 AM

Michael J. Altman said…
Carol, what I'm finding is that the evangelicals and the Unitarians deployed Hinduism to suit their own inter-Protestant arguments. For example, in their debates with Trinitarians, the Unitarians often wished for an impartial observer who could weigh the evidence for and against the trinity and settle the debate rationally. Rammohun Roy became that arbiter in their eyes because he was a Hindu outsider and because he rejected the trinity as just another form of polytheism. On the other hand, evangelical missionaries described Hinduism as idolatrous heathenism in their reports of popular religious practice in India and largely ignored the Vedas and other texts that Orientalists and liberals would find so interesting later in the century.

I have yet to come across that Quaker critiques you mention. I need to take a look at that.

I think the missionary/Unitarian split in reaction coincides with the larger history of Protestant reactions to Hinduism in America. Evangelicals and missionaries would focus on "heathen practices" and liberals would focus on Vedantists like Rammohun, Chunder Sen, and Vivekananda and ancient Sanskrit texts like the Bhagavad Gita.
March 26, 2012 at 8:47 AM