What a pleasure it was this weekend to very temporarily stop the endless rounds of academic duties – job searching, juking some assessment stats, grading (and then some), survey reporting, ad infinitum – and sink a little while into Joanna Brooks’s engaging memoir/war stories/reflections on her life, The Book of Mormon Girl: Stories from an American Faith. This came out electronically originally, and has just been published in print.

Scholars will know Brooks as the author of the field-defining work American Lazarus: Religion and the Rise of African-American and Native American Literature (Oxford University Press), as well as The Collected Writings of Samson Occom, an incredible feat of scholarship that I recently relied heavily upon in writing a bit about Native American Christians in the colonial era. I previously blogged about that work appreciatively. You scholar-geeks out there-- check out the annotations and footnotes to that book, and be humble. 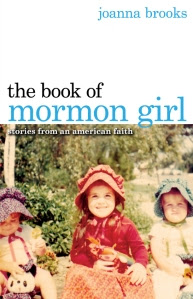 But while teaching first at UT Austin and now San Diego State, where she chairs the English department (and delivers wise advice to some of us who face the burden nightmare  tedious task  wonderful opportunity of chairing soon), and writing frequent and always insightful blog entries for Religion Dispatches and for her personal blog/advice column Ask Mormon Girl, Joanna has more recently turned to a new calling – to write for a more general public on growing up as a Mormon, confronting the LDS Church as a feminist and liberal, and learning to appreciate her story and struggles even while dealing with the pain of her struggles.

The Book of Mormon Girl is a book of stories, taking us through childhood scenes (where she was a "root beer among Cokes" in Southern California), adolescent struggles, and then on to college, where, rather than (as she expected) meeting her long-awaited husband, she ended up tearing up her diploma in protest. She then tells about her “years in exile” from the Church, and her more recent (partial) reconciliation with her past and her faith. I’m not going to try to describe the stories; you just have to read them in her original and very powerful voice.

Further, the book is getting discussed reviewed extensively in the "Mormon archipelago" of blogs, including this piece at Common Consent, and all of these are by people with the firsthand experience and knowledge to judge, appreciate, and critique the work, as well as to compare their own personal experiences. In terms of comparing stories, I yield to their greater experience.

Rather, throughout I kept comparing them to my stories, if I were to ever write a “Stories from an American Faith” of growing up Southern Baptist (and don’t worry, that ain’t going to happen). So many of the scenes she relates here were like amped-up versions of times I remember from younger years. While Joanna and 15,000 teenage Mormons rocked around the clock in the Rose Bowl in 1985, a story told in a wonderfully entertaining chapter, I gathered with 10,000 other Baptist kids from across Oklahoma, Texas, and elsewhere in what was (so we were told) the largest religious youth assembly in the country, Fall’s Creek, in Oklahoma, and sat remarkably patiently through stifling southern Oklahoma summer heat while charismatic preachers orated emotionally and memorably and scores of youths came to the altar tearfully. I even played in the band (trumpet -- and execrably bad) so that I could sit in the front (and flirt with the flute players, of course) and not have to arrive an hour early to get a “good” seat in the hard outdoor tabernacle pews. And that was just one week. Fall's Creek in those days annually went on for 5 weeks, with a different set of 6,000 - 9,000 kids a week. That's a lot of Southern Baptist youth. I always envied the kids from the big city churches, with their strappingly athletic volleyball teams, seemingly cosmopolitan young women, and excellent musicians.

And while Joanna tore up her BYU diploma in protest against the purge happening in those years, some of us at Oklahoma Baptist University (around 1979-1981, at the inception of the so-called "conservative resurgence" in the Southern Baptist Convention) wore T-Shirts that said "Heretic" in defense of professors who were being secretly taped by fundamentalist youth who reminded me of Nazi youth -- that was my perception then, and it remains my perception now for that matter. And the purge of Mormon feminists, related in this work with the pain that Joanna still so obviously feels, can be likened to the purge of female scholars at Baptist seminaries for a certain time in the 1980s and 1990s (and for that matter more recently, in the case of a female Hebrew professor at Southwestern Baptist Theological Seminary that was so despicably handled that even some Baptist conservatives spoke out against it)

And yet, all the way through, I kept thinking, no matter what story I can think of, Joanna has one that is ten times better, like growing up evangelical, only on steroids. Evangelicals had family times together, but not like Mormon families. We had visionary experiences, but they were safely kept at a distance. We talked sometimes of being embattled in a culture, but the fact of the matter is we were the culture, too busy drinking cokes to even know there were root beers (I think I was unaware that actual Mormons existed until the year BYU beat my beloved Sooners in football -- 1980 something, I think it was). Some of us might get made fun of occasionally (and in my youthful self-righteousness, god knows I deserved that), but we didn’t have tracts, books, and anti-Southern Baptist evangelists specifically out on the hustings attacking everything about our faith. On the contrary, we were the ones attacking others. It was Friday Night Lights meets church on time.

We had plenty of missionaries, of course, but for god's sake those were special people called by God; the idea that it would be normally expected of all Baptist male youth would be unthinkable.

And then I found the explanation in the chapter “Mormons v. Born-agains: Dance-Off, Rose Bowl, 1985” (by the way, by 1985, I was much more likely to be found at the Greek Theater Bowl in Berkeley or Yoshi's in Oakland, at a Stevie Ray Vaughan or King Sunny Ade or Joe Henderson concert, than at a religious meeting, but that’s a story for another day).

Joanna relates a massive gathering of Mormon youth in the Rose Bowl, where they sang

Shall the youth of Zion falter
In defending truth and light
While the enemy assaileth
Shall we shrink or shun the fight?
True to the faith that our parents have cherished
True to the truths for which martyrs have perished.

Wow, just some years before at Fall’s Creek I remember singing a lot of tunes such as “God is Watching is Over me,” with a sing-song tune and incredibly simple and reassuring lyric. We didn’t have any martyrs who had perished, and so therefore “everything is going to turn all all right.” We weren't spitting in the wind; we were enjoying the fruits of generations of Southern Baptist laborers who had created a remarkably comfortable, mostly happy religious world in which to grow up.

But then Joanna writes (reproducing her 13-year old thoughts in first person): “I’d like to see the born-agains pull this off. I’d like to see them muster this degree of regimentation. . . .What did these people know about discipline and commitment”?

Hold on just a minute there, I thought; I saw an awful lot of discipline, commitment, and regimentation at Fall’s Creek, and among adults in the literature about the “Bold Mission Thrust” that I remembered from my high school years, and the annual and incredibly effective Lottie Moon Day offerings, and in the denominational machinery which pumped out literature for the 15 million and more Southern Baptists across the country. So, Joanna, I’ll see you and raise you one, I thought.

But then she continues (still in first-person thirteen-year-old voice):


Did they go to church at six a.m. every morning before school like Mormon kids did? . . . Had they drilled the stories and teachings of four – that’s right, four—books of scripture into their heads. No, just one, just the Bible.
Had they carefully sealed up tins of rice and textured vegetable protein against the great and final days? Were they ready to live through the end times? No, while they dreamed of being transported up into the clouds like Star Trek, we were ready to live out the nuclear winter that would follow the second coming of Christ, to rebuild a kingdom from the charred timbers of leveled forests.
Those born agains could never do what we did. Cross the plains. Track down and baptize our dead ancestors by the millions. Fan out all over the globe two by two, knocking doors. Precision coordinate 15,000 teen-aged dancers. What it all came down to was this: those born-agains were soft.

She concludes the scene:

“We waved our pompoms for Godon Jump, calico bonnets, and Bachman Turner Overdrive, and against The Godmakers [an anti-Mormon film] and the anti-Mormon stand up comic in his rumpled khakhis. . . I waved my pompom because I was not afraid of polygamy, sacred underwear, or the idea of eternal godhood, and neither were the 15,000 youth in flammable sateen outfits moving in majestic precision on the field around me. I was not the only one who believed in worlds as numberless as the stars in the sky. Why not? Why the heck not?”

You win, Joanna – we were soft. And you win, too, in producing a collection of memories and stories with imagery that will linger long with me.

You're always good, but I think some sort of angelic writing spirit possessed you while you composed that post.

By the way, if the Mormons had the "born-agains" whipped, imagine where the mainline Protestants stand in the pecking order of regimentation and toughness. We Presbyterians couldn't get the idea of crossing the plains out of committee.
February 19, 2012 at 11:33 PM

Paul Harvey said…
That's why American Presbyterians more or less invented modern academia, John, don't you think? (With some previous help from the Congregationalists, mind you). Usually we can't even cross the campus together with a plan, much less cross the plains.
February 19, 2012 at 11:40 PM

M.E.Martin said…
Thanks for the review, Paul. As you know, I can RELATE. :) Love the flirting with the flute players, and Friday Night lights meets the church on time. "Heretic" shirts - a vague memory, I think... hmmm...I'm thinking on that. I could add my own stories of "Mission Meeting" to your missionary mention. :) The book sounds like a great addition.
February 20, 2012 at 8:01 AM

Paul Harvey said…
Margaret, the T-shirt thing was mainly my freshman year, I believe, so would have missed you by a year. But speaking of memoirs, YOU need to write a full account of your younger years -- how many writers grow up as one in a set of triplets to a missionary family in Nigeria? Maybe just you! Get to work, Baptist girl!
February 20, 2012 at 10:29 AM

joanna b said…
thanks everyone, and paul--i definitely want a baptist guy confessional--even if it's just a short story. thank you so much for reviewing my book! if anyone wanted to use a piece of it in a class on embarrassing religious adolescent moments, or gender and religious conservatism, etc., i'd Skype right in to say hi to your students.
February 21, 2012 at 1:25 AM

Mike Pasquier said…
My students and I listened to Joanna Brooks' interview with Krista Tippett on the APM show "On Being." The course is "Religion and Public Life in America," and I paired it with our discussion of the Second Great Awakening. A really interesting, insightful way to consider Mormonism in the past and present. Highly recommended listening for everyone! Thanks, Joanna!
February 21, 2012 at 5:43 PM