The Ballad of the Louvin Brothers

Any day the New York Times covers the Louvin Brothers in the book review section is a good day. Sunday's review section features the new autobiography/memoir Satan is Real: The Story of the Louvin Brothers, in which the surviving Louvin, Charlie, tells the story of the brothers' amazing career as one of the premier singing duets of the twentieth century (until his brother Ira died in a car crash in 1965 -- the normally drunken Ira that night being sober, but killed by another drunk driver).

A brief excerpt from the beginning, in which Charlie captures the brothers' eerie but unforgettable harmonizing: 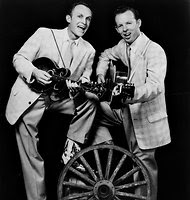 By Charlie Louvin’s own account, people who saw the Louvin Brothers perform were mystified by the experience. Ira Louvin was a full head taller than his younger brother, played the mandolin like Bill Monroe and sang in an impossibly high, tense, quivering tenor. Charlie strummed a guitar, grinned like a vaudevillian and handled the bottom register. But every so often, in the middle of a song, some hidden signal flashed and the brothers switched places — with Ira swooping down from the heights, and Charlie angling upward — and even the most careful listeners would lose track of which man was carrying the lead. This was more than close-harmony singing; each instance was an act of transubstantiation. “It baffled a lot of people,” Charlie Louvin explains in his crackling new memoir. “We could change in the middle of a word. Part of the reason we could do that was that we’d learned to have a good ear for other people’s voices when we sang Sacred Harp. But the other part is that we were brothers.”

The review of the new book reminded me to plug (as I have done before here) the great essay "High Lonesome Theology," from 2001, reprinted at Killing the Buddha.

And of course we have to go out with a little from one of the classics:

Randall said…
I read this the other day and immediately bought the book for my iPad. I'm a little obsessed with the Louvin Brothers and their close harmonies.
February 20, 2012 at 6:36 AM