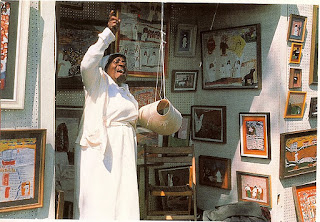 night Preaching the bible and singing and Praying teaching the People about shurn the fire and Brimstone Rev. 21:8,” self-taught/folk artist and New Orleans street preacher Sister Gertrude Morgan (1900-1980) wrote to a friend during her ministry in New Orleans. Morgan’s art and message were apocalyptic, and she blurred the boundaries between the new world, the New Jerusalem, and New Orleans.

After receiving multiple calls from God to preach the gospel, Morgan arrived to New Orleans in 1939, since she believed “New Orleans is the headquarters of sin.” In the 1960s and 1970s, Morgan – artist, musician, street preacher, and prophet – lived and ministered in the Lower Ninth Ward. She ministered at her home (the Everlasting Gospel Mission house), on the streets of the French Quarter, and at the New Orleans Jazz and Heritage Festival. Though her first revelations initially called her to ministry, her third revelation contained the most important message: God told her that she was to be the bride of Christ. Morgan began to wear all white to signify this relationship. She would later sign her artwork with signatures such as: Bride of Jesus, Bride of Christ, Lamb Bride, Nurse to Doctor Jesus, Missionary Morgan, and Your Boss’s Wife. It was also with this revelation that Morgan began to paint, and the apocalypse almost always permeated her work.

Two of her most popular subjects were images of New Jerusalem and her Revelation charters. Both have distinctive iconographies drawn from the apocalyptic texts of the Bible, popular 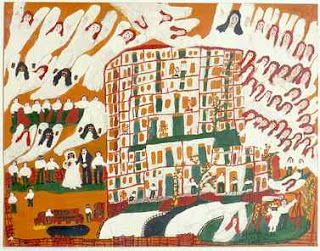 religious imagery, and even more importantly, Morgan’s life and experiences. Her New Jerusalem paintings share visual elements that locate the biblical text in Morgan’s world. Morgan’s paintings of New Jerusalem always contain images of buildings that look strikingly like stacked shotgun houses. Though she took the city’s architecture with her to the new world, Morgan would not take the city’s sinners to New Jerusalem. Her painting Calling the Dry Bones commands local New Orleanians to “rise up from the beer tables card partys domino games to. God take no part with your worldy lust People whats wrong with you,” and the lower left corner of the painting includes a table of gamblers. Additionally, practitioners of the city’s non-traditional churches would not reach heaven; for example she condemns Spiritual church saint Black Hawk in multiple paintings, often connecting him to Satan. Though New Orleans architecture shapes Morgan’s New Jerusalem cityscape, its “sin” has no place.

Her Revelation images reveal Morgan’s literal reading of biblical text; however it is a unique literal reading. The coming New Jerusalem bears architectural similarities to New Orleans. Furthermore, she saw a distinctive role for herself in the coming apocalypse. In all of her paintings the most common element is herself, and her paintings placed her into the biblical text. Sometimes she played the role of John in the Book of Revelation, by calling herself prophet but painting her interpretation of his vision. Also, as the bride of Christ, she often painted images of her wedding with Jesus.

In addition to painting, Morgan sang and even recorded an album – Let’s Make a Record – consisting of various spirituals, gospel tunes, and largely original Morgan lyrics to the tune of her tambourine. She would also recite scripture and improvise short sermons throughout the tracks. Like her paintings, her music was largely instructional and included her own exegesis of particular texts. The apocalyptic urgency of her paintings is present in her music too; in her song “Power,” she sing/preaches:
Troubling people, don’t let ‘em rest, continue
Let them know they got a soul to save
Shake ‘em up and wake ‘em up
Yes lord, power, power
Yes lord, put their mind on the kingdom
You pay that prayer that power like kingdom come
Now they’re not prepared for the kingdom
They don’t believe in the kingdom, amen
Talkin’ bout everyone got to die, the church say amen.

Morgan stopped painting in 1974, following another revelation from God. She told one of her

patrons, “Painting now? Oh no, I’m way too worried. Worrying about what time it is, and praying on people’s cases… You don’t have to look far these days to see fire and brimstone. No sir, it’s just like it was in the days of Noah, only it’s worse, because there’s more people. Tell em God’s wife told you that.” With the end times coming soon, Morgan turned her sole focus onto praying and preaching. Throughout her prophetic career, preaching the coming apocalypse remained her key task. Whether she was a new prophet John of Revelation or a modern-day Noah, Morgan believed we would soon cross into the new world foretold in the Book of Revelation.

By means of her cityscape, Morgan used New Orleans as a model for her images of New Jerusalem, and created her own religious message. She drew from her immediate environment, New Orleans, though she called it “a headquarters of sin,” as the visual template for her vision of the New Jerusalem. Though she looked to the future, her home at the Everlasting Gospel Mission shaped her new world dwelling. When she sang “I got the new world in my view,” that new world greatly resembled the sinful city she came to save.
Email Post
Labels: apocalypticism emily's posts new orleans religion and art

Tracy said…
Thanks for this, Emily!

A benefit set released after Katrina, "Made in New Orleans: The Hurricane Sessions," features Sister Gertrude singing "I Don't Want to be Buried in the Storm" at Preservation Hall in 1954. You can listen here:

(Listen to the brief intro at 8 too.)

Paul Harvey said…
Agreed, Tracy, made my day too. A little Sister Gertrude shows up in my book Moses, Jesus, and the Trickster; for that little bit I relied on William Fagaly's Tools of Her Ministry: The Art of Sister Gertrude Morgan (2004), described and briefly reviewed here: