KKK Books and the Direction of History

Over at the New York Times, Kevin Boyle reviews two books on the Klan. Fellow blogmeister Kelly Baker's Gospel According to the Klan: The KKK’s Appeal to Protestant America, 1915-1930 is one of them along with Thomas 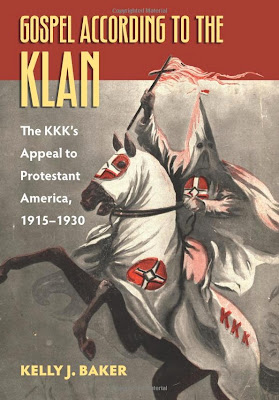 R. Pegram's One Hundred Percent American: The Rebirth and Decline of the Ku Klux Klan in the 1920s.

The authors take different tacks. "While Pegram builds his book up from the experiences of ordinary Klansmen," writes Boyle, Baker "builds out from the Klan’s official declarations of religious devotion drawn from K.K.K. newspapers and magazines." What did the Klan's rise and fall mean? Was it an anomaly of the era or did it represent something darker, more continuous with America's past?

"Yes, the Klan had a very short life," says Boyle. He goes on:

But it has to be understood, [Baker] contends, as of a piece with other moments of fevered religious nationalism, from the anti-Catholic riots of the antebellum era to modern anti-­Islam bigots. Indeed, earlier this year, Herman Cain declared that he wouldn’t be comfortable with a Muslim in his cabinet. It’s tempting to see those moments as Pegram does the Klan: desperate, even pitiful attempts to stop the inevitable broadening of American society. But Baker seems closer to the mark when she says that there’s a dark strain of bigotry and exclusion running through 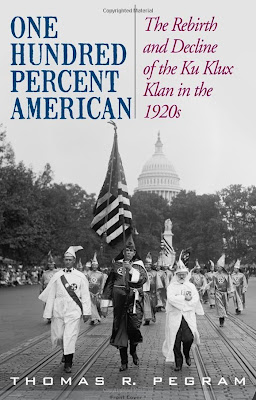 the national experience. Sometimes it seems to weaken.
These books and Boyle's review bring up some weighty issues within American historiography.

How do historians and religious studies scholars generally see these episodes within the context of the arc of American history? Whig historians, of one variety or another, view them as bumps or potholes on the road to freedom and greater equality. Prigs look at them as something more, throwing the whole idea of progress up into the air. (Of course there are all sorts of opinions on the spectrum, shading from one end to the other. Historians need not even be aware of their own views on the subject. See Christopher Shannon's critique of the profession, which we published in Historically Speaking some months ago.)

Take Slavery. How does it fit into the narrative of US history? In 1980 historian John David Smith wrote in the Journal of Negro History that "The importance of slavery in the racial thought of the late nineteenth and early twentieth centuries has been vastly understated by scholars. Yet slavery held an unusual attraction for historians, popular writers, editors, and polemicists in these years." His piece marked a trend in the field. Slavery, historians now wrote, should be taken seriously as integral to the economy and to life in the 19th century. The PBS series Africans in America: America's Journey through Slavery spelled out this theme for a wider audience and included talking head historians like Eric Foner, James Horton, and Nell Irvan Painter. Says Foner, "Slavery was an immense political power in the country, as well as an economic power. The three-fifths clause of the Constitution gave the slave South far greater representation in Congress, and a far larger number of electoral votes, than their white population really would have been entitled to. So the South really had an iron grip on the federal government, down to the middle of the 19th century."*

Other historians have been grappling with the issue of religious freedom/intolerance in ways that parallel Baker's approach. How does one chart the story of religious pluralism and religious bigotry? On this matter David Sehat sees a bleak side to America's past. "What if U.S. religious history was not a history of progressive and unfolding freedom?" he asks in his The Myth of American Religious Freedom. "What if, instead, it was a history of religious conflict? And what if that conflict involved extended periods of religious coercion and the continual attempt to maintain religious power and control?"

On the 19th century Protestant establishment an essay by Ronald P. Formisano and Stephen Pickering sheds some light (or, I guess I should say darkness?): “The Christian Nation Debate and Witness Competency,” in the Journal of the Early Republic. Most importantly, they note:

Historians have examined closely the Founders’ intentions regarding the First Amendment’s religious establishment clause as well as the influence of Protestant Christianity in the public life of the early republic. The new national government, and particularly several states, often breached Jefferson’s “wall of separation” between church and state. . . . In courtrooms across the country, well into the nineteenth century, judges allowed witnesses to be questioned regarding their religious beliefs, with some requiring belief in the “future state” doctrine of divine rewards and punishments before permitting them to testify.
Of course, one generation's dark moments are another's beacons of truth. From where we stand in 2011, we judge and think about the past in ways that are profoundly different from the perspective of historians and religious studies scholars half a century ago. (Think Mircea Eliade.)

If we pull back and gauge the whole, what is American history in general or American religious history in particular about? Do either have a direction or a larger point? What if--as Paul Harvey asked in his review of the PBS documentary God in America--"American religious history [is] about coercion and authority? . . . [W]hat if we make coercion, establishment, and repression as central to our narrative as freedom, disestablishment, and expression? What if this is a show in which Americans’ self-understanding as derived from Exodus is more critically examined than celebrated?"
Email Post
Labels: historiography kelly baker klu klux klan randall's posts religion and race

Chris Price said…
A couple of good recent works have looked at similar issues. One was Lynn Neal's article in the June 2009 issue of Church History, "Christianizing the Klan." This article showed how KKK sympathizers used images in their literature that depicted the Klan in Christian and 100% American terms against Catholics, Jews, unions, etc. A good recent work on anti-Catholic journalism in the Progressive Era is Justin Nordstrom's Danger on the Doorstep. The anti-Catholic publication, The Menace, had the second-highest subscription rate in America for a time. All of this tied to the idea of 100% Americanism, which the KKK endorsed. I was also doing some research recently on a totally unrelated subject, and a minister's autobiography (Albert F. Gray) told of a service that he attended (I believe it was Washington State) in which some men in robes came in, presented an American flag, and left. Although the book did not identify said men, I assume that it was some Klansmen given the time period and this practice.
November 27, 2011 at 6:29 PM

Kelly J. Baker said…
Thanks for mentioning these works. Justin and Lynn's pieces are must-reads for this historiography.

This month in Material Religion I have a piece on Klan robes, crosses and the American flag that discusses Klan visitations that might be of interest to you, Chris.
November 28, 2011 at 7:50 AM

Curtis J. Evans said…
Randall,
lots of probing questions and profound insights about how we think about American history, especially if we reflect on how we narrative central themes. I've been thinking about some of these issues as I'm about to finish teaching my course on Slavery and Christianity, which I try to teach once a year because of my conviction of how important the issues addressed in this course are to the formation and development of the US as a nation. In fact, it is hard to avoid such things as how we think, write and talk about venerated figures such as Abraham Lincoln. This comes to mind because I ended up settling on using Michael P. Johnson's, "Abraham Lincoln, Slavery, and the Civil War" to end the course in part because of the excellent selection of documents and my fondness for the Bedford series. In preparing for this class, reading these documents, and re-reading the introduction to Henry Louis Gates' edited collection, "Lincoln on Race & Slavery," it is hard to avoid questions about how the language of race has changed (witness Lincoln's public use of the n-word as early as the Lincoln-Douglas debates) and to conclude that Lincoln was deeply ambivalent felt about "the black presence" in the nation, openly airing his feelings about colonization as a solution to the race problem as late as 1863 to a delegation of free blacks to the White House. Although these specific concerns are removed a bit from the issues that Kelly addresses (I have yet to read her book, but it is certainly on my list!), I am certainly sympathetic to her argument about deep strains of nativist thought in American history and her worries that we have a tendency to regard as aberrations and anomalies the darker impulses of racism, violence, etc. Anyone who spends time dealing with race has to confront these kinds of questions. I realize my post is getting too long, though I have much more to say.
November 28, 2011 at 8:50 PM

Randall said…
Curtis: Thanks for those comments. I'll have to check out that Bedford book and consider using it for my course that runs from 1787-1865. I like those texts for the same reasons that you mention.

Curtis J Evans said…
Just wanted to make a correction about an historical note. It was actually August 1862 when Lincoln entertained the free black delegates and talked about colonization.
November 29, 2011 at 9:52 AM

Jeff said…
This blog reminds me of some events that took place in Matthew Sutton's book about Sister Aimee Semple McPhearson. Throughout the book, Sister Aimee maintains an interesting relationship with the Klan. When it favors her (ie accepting monetary donations), she seems to embrace them. However, when it would be disadvantageous to associate with them, Sister Aimee stands up to them and denounces their ideals.
December 9, 2011 at 4:49 PM

BStrausheim said…
I thought of the same qualities as Jeff stated, as I too am studying Matthew Avery Sutton’s book on Sister Aimee. I believe Sutton realized through McPherson’s relationship with the KKK how they were used as a source of political means, since she often collaborated with them when their services as a political force were needed, yet when they looked bad and created distraction, she was quick to dismiss them. She saw their emphasis on white Protestantism, and their fervent passion, as a means of further pursuing the expansion of the Angelus Temple, and her own personal agenda. Yet, underneath their power was a bigotry and hatred that even McPherson herself couldn’t overlook, which ultimately caused them to push away from each other. I feel the Sutton found in McPherson a mixture of progress and oppression that many historians debate about on the KKK. For her, at least, they were on the one hand great “promoters” (for lack of a better term) and could serve great purposes. On the other, they were obstacles to progress with other groups, which is where Aimee attempted at times to bridge the gap. I believe Sutton’s look into Sister Aimee’s relations with the KKK display this conundrum, and could be a possible look into reasons for their “rise and fall”.
December 12, 2011 at 12:38 AM