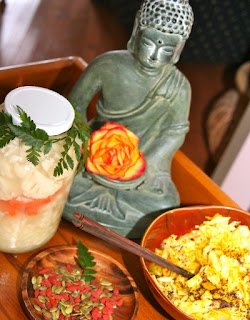 Editor's note: I'm delighted to guest post today a contribution from our old friend Rachel Wheeler of IUPUI - Indianapolis, who's currently serving a year as a Fulbright Fellow in Germany. We've blogged before about Rachel's excellent first book To Live Upon Hope: Mohicans and Missionaries in the Eighteenth-century Northeast.
Lately, though, Rachel has been contemplating some important matters more close to the present day. She presented a draft of her ideas as a paper, and I'm excerpting a bit of this below as Part I of what will be a three part post about food, sustainability, and religious sensibilities in contemporary America. On this most food-centric of holiday weekend, it seemed appropriate to post this. After reading this, continue on with Part II of this series here, and the finale, Part III, here.

Eating as Spiritual Practice: Locavangelism in America
by Rachel Wheeler
About a dozen years ago, I found myself on a college campus in Portland, Oregon, listening to a talk by a man who billed himself as the “mad, vegetarian cowboy.” Howard Lyman was the founder of an organization called “Voices for a Viable Future,” and that day, as I’m sure he did at hundreds of other public appearances, he told the story of how he had grown up on a cattle ranch in Montana in the 1950s. It was a small operation, but one that had sustained the family for several generations. Then he went off to ag-school at a time when “better living through chemistry” was embraced by agricultural scientists. He came back to the farm with the zeal of the convert. He told his father he wanted to make the ranch bigger and better. They bought up more acres, and started on the path to modern, chemically intensive, factory farming and feed-lot ranching.

Then in 1979, Lyman became paralyzed from a tumor on his spine. His doctors said they could operate to remove the tumor, but chances were he would remain paralyzed, or worse, die during the surgery. Lyman made himself a promise that if he survived, he would devote his life to what he believed was right. The surgery was successful: Lyman not only survived, but he was once again able to walk. At the time, Lyman was 300 pounds (135 kg), and he suffered from diabetes, high blood pressure and high cholesterol. True to his word, he changed his life. He became a vegetarian, dropped to a healthy weight, and started un-doing all the “improvements” he had implemented on the family’s ranch. He became a lobbyist on Capitol Hill against factory, feedlot farming and even found himself being sued for libel by the beef industry. He became president of an organization named: EarthSave, whose motto is “healthy eating for a healthy planet.” Today he runs an organization called “Voice for a Viable Future.”

Though I cannot know for sure, I am willing to bet that the vast majority of the people in the audience that evening counted themselves as despisers of “organized religion” (the Northwest being the least-churched region of the country, and Reed College students being the second most un-religious students in the whole country) and that they perceived nothing at all religious about the evening. But I couldn’t help but feel I had just attended a religious revival. Lyman’s talk had all the hallmarks of a revivalist sermon, minus any mention of God or Jesus. He had told of the sinful ways in his youth, his arrogance and his disregard for the wisdom of tradition. He recounted the crisis sparked by illness, a miraculous cure, and the epiphany that allowed him to see the error of his former ways. He then chronicled his path of righteousness. The lecture ended with what felt like an altar call, as Lyman exhorted listeners to renounce the sinful ways of the world and follow the narrow path of righteous eating.

In the dozen years since I heard the Mad Vegetarian Cowboy, a lone voice in the wilderness has turned into a loud chorus; and a cultural shift seems to be under way with food front and center. You can scarcely open an American newspaper or magazine today without finding a story that in some way mentions the locavore movement. The term “locavore” was coined in 2005 to mean someone who eats food that did not travel far to reach the plate. The editors of the Oxford English Dictionary declared “locavore” the word of the year for 2007. The Girl Scouts now offer a badge that can be earned by preparing a meal of locally grown food. The movement is far from monolithic: it is possible to find a wide range of belief and practice, from the casual practitioners who occasionally frequent farmer’s markets to augment their supermarket shopping, to those who might be termed fundamentalist locavores, who will not eat a morsel at a restaurant without knowing how far the food traveled, and how the animals were housed and fed. The locavore movement, made up largely of the college educated and reasonably well off, has created a mini-publishing industry, and a flurry of books recounting experiments in extreme locavorism or eco-living has rolled off the presses in recent years: some of the titles include: the bishop of locavangelism, Michael Pollan’s, In Defense of Food, Collin Beaven’s, No Impact Man, Barbara Kingsolver’s, Animal Vegetable Miracle, Kristen Kimball’s, The Dirty Life, and my favorite title (though I confess I haven’t read the book), by Vanessa Farquarson, Sleeping Naked Is Green: How an Eco-Cynic Unplugged Her Fridge, Sold Her Car, and Found Love in 366 Days.

There is an equally voluminous output by Christian publishers, though it has gone largely un-noticed by the mainstream media. Presbyterian pastor Craig Goodwin recently published, A Year of Plenty: One Suburban Family, Four Rules, and 365 Days of Homegrown Adventure in Pursuit of Christian Living, and Ragan Sutterfield, founder of a farm-school for disadvantaged youth, published a collection of essays entitled, Farming as a Spiritual Discipline. Rod Dreher, a Methodist turned Catholic turned Eastern Orthodox, has written about conservatives who embrace what are usually seen as liberal issues in his book: Crunchy Cons: Or How Birkenstock Burkeans, gun-loving organic gardeners, evangelical free-range farmers, hip homeschooling mamas, right-wing nature lovers, and their diverse tribe of countercultural conservatives plan to save America (or at least the Republican Party); and one of my favorites, Don Colbert’s, What Would Jesus Eat?

One of the most prominent voices today bridges the Christian and the secular, lefty realms and belongs to Joel Salatin, who calls himself a “Christian libertarian environmentalist capitalist lunatic,” or sometimes, just a “lunatic farmer.” Salatin first came to national prominence through the writings of Michael Pollan, who featured Salatin in his 2006 Omnivore’s Dilemma, which has become the bible of the Locavore movement. Salatin is a 1979 graduate of Bob Jones University (a fundamentalist Christian university), who runs a farm in Virginia. He writes on the farm’s website: “We are in the redemption business: healing the land, healing the food, healing the economy, and healing the culture.”[1] What the “mad cowboy” and the “lunatic farmer” both mean of course, is that they are far from crazy. Like Wendell Berry before them, who often wrote poems as “the Mad Farmer,” they mean that they are the ones who perceive reality most clearly, and who are willing to be seen as crazy by the world in order to proclaim their truth. Consciously or unconsciously, these authors are invoking the trope of the “fool for Christ;” the believer who challenges societal norms in order to follow a higher calling, and, they hope, lead the way to salvation.

This recent food “madness” begs for interpretation. Is it simply the latest health craze destined to meet the same fate as the Atkins diet, or aerobics? or is there something deeper going on? I think indeed there is something deeper going on, and I believe there are profound resonances with deeply rooted elements of American religious culture. But I think what is most fascinating of all is that the movement has gained substantial momentum among two groups who rarely care to be associated with each other: evangelical Christians and secular liberals. And I think this convergence offers some hope (Tea Party vs. Occupy Wall Street to the contrary) that the chasm between right and left may in fact bridgeable. . . .

What locavores on the left and right seem to have in common is their emphasis on the importance of practice. It seems to me to be a commentary on what many now see as the superficiality of the 1990s. Both sides are seeking ways to realize their beliefs through actions. It is telling, I think that the environmental movement is growing not by more people heading for escape to a pristine wilderness, but through rediscovering the ancient traditions of agriculture, a turn that seems eminently more practical in a precarious world. As Ragan Sutterfield writes, “the problem with our role in creation is that we don't remember it. In our fallen state we have forgotten our place, both within God's will and love and also in our love and care for creation. We need to be reminded of who we are and what we are about. Practices and disciplines are our primary way of learning to remember, of being recollected to our place and call as creatures. I would like to offer farming, done well, as one of those disciplines.”[2]

I find it fascinating, that a predominantly Protestant country has suddenly discovered “practice.” I don’t know quite what to make of this: it could be a response to the broader political and cultural forces, or it could suggest the assimilation of important religious ideas and practices from other religions. Americans are clearly hungry for practical guidance: Michael Pollan’s prescriptive book Food Rules, was quickly vaulted to the top of best-seller lists. Americans seem to want to be told what to do and many are finding new spiritual rewards in practicing the discipline of eating according to Pollan’s rules. Locavorism may well be the new Kosher, but it is being embraced with evangelical fervor.

Craig said…
Rachel,
Thanks for this insightful piece on food and religion in America. I look forward to part 2.

I think you're definitely on to something here. I'm especially glad to see you highlight Ragan's book which hasn't gotten nearly the attention it deserves.