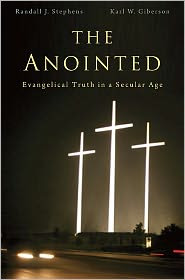 Kelly Baker
While John Turner aptly describes "dominionists on the loose" and the media brouhaha over the threat of theocracy via Christian dominionism, our own Randall Stephens, writing with Karl W. Giberson, had a New York Times editorial aptly titled, "The Evangelical Rejection of Reason" published yesterday. Coming on the heels of their book, The Annointed Age: Evangelical Truth in a Secular Age (reviewed here by Chris Beneke), they argue convincingly about the war on science as "part of a politically monolithic red-state fundamentalism, textbook evidence of an unyielding ignorance on the part of the religious" as well as map out the anti-intellectualism inherent in these attacks. Randall and Giberson make distinctions between their own evangelicalism and the politicized vision of current Republican nominee hopefuls.
Here's an excerpt:
As one fundamentalist slogan puts it, “The Bible says it, I believe it, that settles it.” But evangelical Christianity need not be defined by the simplistic theology, cultural isolationism and stubborn anti-intellectualism that most of the Republican candidates have embraced....
Fundamentalism appeals to evangelicals who have become convinced that their country has been overrun by a vast secular conspiracy; denial is the simplest and most attractive response to change. They have been scarred by the elimination of prayer in schools; the removal of nativity scenes from public places; the increasing legitimacy of abortion and homosexuality; the persistence of pornography and drug abuse; and acceptance of other religions and of atheism.
In response, many evangelicals created what amounts to a “parallel culture,” nurtured by church, Sunday school, summer camps and colleges, as well as publishing houses, broadcasting networks, music festivals and counseling groups. Among evangelical leaders, Ken Ham, David Barton and James C. Dobson have been particularly effective orchestrators — and beneficiaries — of this subculture. (Continue reading here.)
Editor's note: Also check out John Fea's discussion of the editorial here.
Email Post
Labels: baker's posts evangelical conservatism evangelicalism fundamentalism Randall Stephens

Paul Harvey said…
Kelly, Our posts on Randall's editorial went up at nearly exactly the same moment, so took mine down, but my post also mentioned that the piece is excerpted over at John Fea's blog, http://www.philipvickersfithian.com.
October 18, 2011 at 9:46 AM