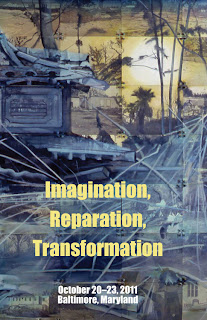 Here's the second part of our conversation: "What does American Studies reveal to us about religion in America?" Today, Mike and I pick up with discussions of the secular, American studies and religion, and why you all should be going to ASA in the future. Enjoy!
Kelly Baker (KB): Another point that I would like your opinion, Mike, is the emphasis on the secular and its relationship to religion. What do you make of these encounters with this loaded term?
Mike Altman (MA): I found an interesting discussion of secularism in Matt Hedstrom's (University of Virginia) paper analyzing the constitutional reform movement following the Civil War and its work to put God into the Constitution. Hedstrom pointed out that religious liberals stood on the front lines of the fight to keep the Constitution secular and further argued that the dispute over the secularism of the Constitution was actually a theological battle between conservatives and liberals and not a debate between the religious and irreligious. On that same panel Joseph Haker (University of Minnesota) presented a paper on postwar Ten Commandments monuments. Haker argued that these monuments were not religious like their contemporary Christian Right cousins, but instead were symbols for the American Way of Life, in a Protestant-Catholic-Jew sense. He claimed they were secular symbols. Here again we see the limits of contemporary discourse about secularism and its religious/irreligious dyad. In one case religious liberals and conservatives debated the necessity of a secular Constitution to the maintenance of religious freedom and in the other a religious symbol is deployed in the name of nationalism and a secular way of life.
Haker’s presentation included some great photographs of the monuments and the rabbis, pastors, and priests involved in installing them. These photographs pointed out what linked together these 19th and mid 20th century debates about secularism with today--whiteness. Here’s where I asked your “whiteness question” and what came to the fore for me was the ways the debates about seularism are largely white debates due in large part to the long Enlightenment, Protestant, and post-Protestant history of the argument. Talal Asad has pointed this out already but these two papers gave me new images and examples for thinking about it.

Related to this is a paper from another panel on religion and space in America from Nicolas Howe (Williams College). Howe told the story of Native American opposition to developments on the San Francisco Peaks because the peaks were considered sacred to various Native American nations. Specifically, native groups opposed the use of reclaimed sewage water to make snow for a ski area on one of the peaks. They argued that this would desecrate their sacred space. In a smart move, Howe argued that their arguments about desecration of sacred space mirrored secularist arguments about the ways various religious performances or materials “desecrate” secular public spaces. Howe further argues that the law has generally had problems dealing with both of these arguments because of their similar use of ideas of desecration or contamination.

So to answer you question, coming out of the weekend I’ve seen that the usual framing of secularity as secular vs. religious misses the multiple ways that these two discourses overlap, intertwine, and ape one another. They are not just two sides of the same coin. They are, in fact, the whole coin. (KB: yes, yes, they are!)

So, one final question for you: what difference does it make to approach religion in America from American studies instead of from religious studies or history?

KB: This is a good question too. For better (or possibly worse), I attend ASA and AAR as my major conferences each year. At ASA, sometimes I feel like I have to cajole folks into paying attention to religion as a major component of American life. This seems like a silly thing to say, but religion often only pops up at predictable moments in ASA panels on topics like Civil Rights and suspiciously absent at other times. There was a panel a couple years ago at ASA, in which an audience member worried about using religion as a category of study because this might make religion “real.” As a fellow audience member, I wanted to respond that this was the wrong approach rather we should be paying attention to the reality of religion in the lives of Americans rather than getting trapped in this unending debate about autheniticity or reality. It struck me that American studies folks should be talking to religious studies folks more, and vice versa.

The theoretical and multi-disciplinary approach of American studies makes it an excellent pairing with the study of religion in American life, as you can probably tell from all the panels we’ve mentioned. Where else could you find panels like the ones we’ve discussed? The panels that I attended not only presented ethnographic case studies or historical studies but sought to make historiographical interventions and to renarrate religion in public life, past and present. These were bold, smart panels that really interrogated how we understand religion as embodied, artifactual, textual, ideological, and historical. Objects spoke in panels from Ben Brazil’s (Emory) “hippie vans” to Heather Curtis’s (Tufts) visual culture of pain. Fundamentalists were fictional for both myself and Tara McCellan (Mississipppi State) and historical, successful businessmen for our own Darren Grem (Emory).

And there’s an embrace of cultural analysis at ASA that leads to big questions about place of not only religion, but race, gender, sexuality, imperialism, and class (to name only a few) in modern life. What I like about ASA is the embrace of big questions as well as a theoretical eclecticism that I find useful and refreshing. Additionally, it is a nice space for anyone who works as an Americanist because it puts you in contact with other Americanists in fields beyond history and religious studies.

None of this should surprise you since my book is in an American studies series. American studies, and the ASA in particular, offered me the ability to negotiate some thorny issues with religious studies and history about method and a scholar’s positionality in a truly mutli-disciplinary way as I was beginning my work on the Klan (and as I finished it). Additionally, I find American studies very helpful as I begin new projects of cultural and religious history that involve unconventional source material (zombies, anyone?) because of the embrace of pop culture as evidence and plurality of methods.

Now, I wonder what your read on this is: how do you think American studies can benefit those of us working on religion in America?

MA: This was my first time at the ASA meeting whereas I have been to the AAR a handful of times in my graduate career and I have to say that I left the ASA much more motivated to get back to work than I have the AAR. That is not to say I don’t love the AAR, because I do, and but I think the difference comes down to the central categories of each organization and how they regard these categories.. The central category of the AAR is, unsurprisingly, religion, and so the folks at that conference appreciate religion in a very unique way. There are also those at the AAR who seem a bit protective of “religion” either in terms of disciplinary turf or its status as a sui generis category (whatever that may mean). The ASA’s central category is “American” and it seems that it is a bit tougher on the “American” than AAR is on the “religious.” What counts as American is constantly being pushed, stretched, questioned, and even beaten up on a bit. In a senese, “America” gets a lot less deference from research at the ASA than “religion” gets at the AAR. The reasons for this can obviously be found in divergent disciplinary histories.

I say all of that to point out that the ASA was refreshingly irreverent to religion--in a good way. Yes, there were two people in the audience who asked silly “why are American evangelicals so crazy?” questions and yes there are people who have read little in religious studies beyond Marx or Freud, but I’ll take that handful of people in exchange for some of the soft-pedaling that goes on within the AAR (KB: I second that too!). There are some great people at the AAR who are probing race, class, gender, bodies, sexuality, empire, power and all of those other wonderful categories with refreshing irreverence and the kid gloves firmly removed but there were more of them at the ASA--or at least a greater percentage of them among the religion panels this past weekend.

I left the ASA really motivated to get home and get back to work on my own project. The research on religion in America presented at the conference was innovative and inspiring. It made me say “I can do something like that!” I haven’t felt that way after an AAR for whatever reason. I love the AAR because it is a place where religion matters and that is extremely important. But sometimes it’s nice to be somewhere where religion isn’t quite so special.

KB: Ditto everything you said here. I finished my panel on Sunday and thought now I can go turn this into an article, and like you, the conversations I had and the panels I attended were re-energizing because there aren’t “turf wars” you describe over what counts as religion or not. It is nice to sometimes avoid those discussions all together. Perhaps, religion studies folk at ASA find the atmosphere more conducive to this kind of interrogation and pushing boundaries than we might at AAR because the stakes do seem higher. The joy you describe is a feeling I come home with ever year after ASA, and I am glad you found a good space at this conference. Now, if only we can convince Paul Harvey to attend.
Email Post
Labels: American Studies Association baker's posts conferences michael altman's posts secularization

Matt Hedstrom said…
Thanks for this fantastic write-up and analysis, and for all your work in making it such a great conference for those of us who care about religion and American Studies. Next year in San Juan!
October 31, 2011 at 11:23 AM