An Amish Paradox That Isn't All That Paradoxical

It seems that the only time I ever see the Amish here in central Pennsylvania is when I'm running late for an 8:00am class.  It's predictable.  Buzzing along the backroads, fretting the inevitability of time, I round a bend and there plods a horse and buggy.  "Shucks!"  I shout (or, if I'm really late, it's "Drat" and "Fooey").  So I wait impatiently for a straightaway, then zoom along in a triumph of twenty-first century technology.  Oh, if only my better angels would quell my road rage.  Then I might take this opportunity to think about my slow moving neighbors' religious distinctiveness.

From their horses and buggies to their clothes and quilts, the Amish identity is among the most recognizable in America.  But their backward march along technology's trail occasionally detours into the modern world.  Many farmers around here hire Amish men who cannot drive themselves to work or Wal-Mart, but don't hesitate to ask their employers for rides.  It's all part of what Charles E. Hurst and David L. McConnell call the “Amish paradox,” characterized by an ongoing negotiation between avoiding the modern world and working within it. Drawing upon their ethnographic research done in Holmes County, Ohio, the authors reveal the differences and tensions existing among the Amish over the uses of technology.  In some communities, for example, prosperous families might hire drivers.  Elsewhere, vehicle travel is banned except for emergencies.

The authors also address Amish attitudes toward sports, and in particular, softball.  For the unbaptized youth, softball is all the rage, which causes some concern.  "Softball requires a considerable outlay of money and time for equipment and travel," Hurst and McConnell explain, "and it calls for uniforms and even haircuts that do not sit well with church members.  The custom of playing under the lights or even on Sundays also runs against Amish beliefs, and there is the fear that exposure to argumentativeness and showmanship that characterize non-Amish sporting events will undermine the Amish emphasis on cooperation and humility." 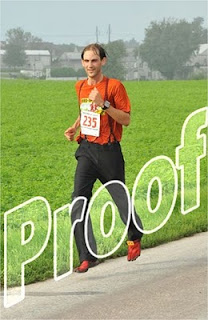 Who knew that softball could have such perilous consequences?   Maybe they could try running.  That seems far less complicated, particularly if you have the right clothes...and shoes.  A friend of mine recently ran the “Amish Country Bird-in-Hand Half Marathon” in Lancaster, Pennsylvania, and forwarded me some pictures.  On this hot and humid day, a crowd of scantily dressed runners mingled with Amish men who wore their standard attire.  That is, except for one participant, who deviated from the footwear norm.  Look closely at this picture and you'll notice on his feet a pair of Vibram Five Fingers. It all makes sense.  As I've said before, these "barefoot" shoes are marketed using Edenic imagery that tells athletes, "You Are the Technology."  In other words, don't believe the shoe companies.  Your feet are the anti-modern solution to fast times and injury prevention.  Maybe we should just call them "Amish shoes"?  After all, this curious image represents a meeting of old and new, where the lines become indistinguishable.  Put another way, as far as shoes are concerned, the march of progress has come full circle, where an unshod Amish man was waiting all along.  I just hope that when he gets back into his buggy, he won't make me late for class.
Email Post
Labels: Amish art's posts new books religion and sports technology

Kathryn Lofton said…
Art -- between your talk of Five Fingers and Harvey on Metta, I find myself having a very cheery Sunday morning review of RIAH. Your entry prompts me to think of the productive analogies between Amish-Mennonite cultures and Orthodox-haredi ones. An interesting class on religion and modernity could bring together the scholarship on the former with the latter, including Jeremy Stolow's "Orthodox by Design," Henry Goldschmidt's "Race and Religion Among the Chosen People of Crown Heights," and Nora Rubel's "Doubting the Devout: The Ultra-Orthodox in the Jewish American Imagination." Happy running -- KL
September 18, 2011 at 8:24 AM

Art Remillard said…
Productive analogy indeed! The intellectual terrain might be a bit different, but perhaps also shift the lens to someplace like Cherokee, NC. I had the pleasure of spending some time in your old stomping ground of Chapel Hill this summer (NEH seminar), and we visited the reservation. It struck me rather quickly that they too are struggling to balance the traditions of Cherokee identity with the pulses and demands of modern America. LeAnne Howe did an exemplary documentary on this, "Spiral of Fire."
September 19, 2011 at 2:38 PM