On Jews and Black Baseball: An Interview With Rebecca Alpert 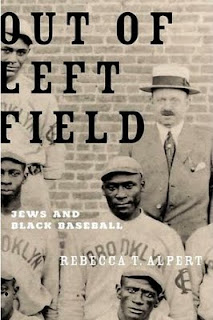 Art Remillard
I can't say enough good things about Rebecca Alpert's new book, Out of Left Field: Jews and Black Baseball (OUP, 2011).  I'll be reviewing it soon for a local radio program.  You can read Professor Alpert's thoughts on the book over at Religion Dispatches, along with an interview.  And then there's my conversation with her below.  Enjoy!

AR: Please begin by giving us some background on this project, and particularly how this is both a continuation of your previous scholarship and a new direction.

RA: I have been interested in twentieth century American Jewish history I wrote my dissertation on American reform rabbis from that era many decades ago. Later in my career I became interested in the intersection of sport and religion, and began to write about Jews and baseball. Writing about racial identity and secular Jewish concerns are the newest parts of the puzzle, and these interests all coalesced around I began to discover about the role Jews played in black baseball.

AR: Your book is as much about race and religion as it is about baseball. Would you discuss how you balanced writing about the game and addressing these broader issues?

RA: An historian friend who read the manuscript in draft complained that there was too little baseball in it. Although I do enjoy the game, I was really interested in how Jews related to the world of black baseball mostly from the perspectives of business and entertainment, so I probably erred on the side of focusing on broader issues.

AR: With a topic like this, I imagine that it was difficult locating sources. Was this the case? And could you talk generally about your experiences in the archives and sorting through newspapers?

RA: I began with secondary materials that would mention the tensions between black and Jewish Negro League owners and the role of the communist sportswriters but didn’t go into detail. I was lucky to meet Rabbi Curtis Caldwell who introduced me to the Belleville Grays, the black Jewish team run by his community. From there, I began to read the African American press. Access to digitized versions of Black Historical Newspapers (rather than the dizzying and eye straining microfilm versions) through my university library made all the difference in the world in terms of being able to do this project. I relied heavily on the observations of the many fine newspapermen in the black press who were writing social commentary on the sports pages. Archives that I consulted proved spottier, but there were gems tucked away in many places; not uncommon in archival research. I also cannot overstate the kindness (and curiosity) of the sundry librarians and archivists who came to my aid, either via email or in person.

AR: Complimenting your impressive assortment of primary sources are your interviews with former Negro League players. How do you feel your book benefited from these interviews? Do you have advice for anyone planning to do interviews for their own projects?

RA: While I loved talking to many of the former players (and reading the oral histories other researchers compiled), I found that the players were mostly reluctant to talk about the Jewish owners I was interested in. There are many possible reasons for that reluctance, but I didn’t really want to speculate about that.

As far as advice is concerned, the website of the Oral History Association is very useful in getting started. It’s really important to do your homework--know as much as you can about the person you want to talk to before contacting them. That will help you craft interesting questions which make good answers possible.

AR: You talk extensively about the Jewish entrepreneurs of black baseball, such as Ed Gottlieb, Syd Pollock, and Abe Saperstein. I felt like their motivations were difficult to pigeonhole. Sometimes they seemed to have noble intentions. Other times, profit won the day. Is this accurate? And what conclusions did you reach about the motives of these businessmen of black baseball?

RA: I think that when good intentions and profit were in sync the entrepreneurs were quite noble. But I also tried hard not to impose the ideas about race and racism that we hold today on them anachronistically.

AR: In contrast, it seemed like the Jewish communists writing for The Daily Worker were much more ideologically driven. That is, they drew from both their Jewish and political rhetorical toolboxes to devise arguments favoring baseball’s integration. Is this accurate? And were these writers coming to the conversation from an entirely different place than the businessmen? Or did they share some common ground?

RA: The communists and the businessmen lived in different worlds. I like to think that it was the communists who were expressing Jewish values rather than the businessmen, but both groups’ behaviors were the product of the experience of second generation immigrants. They just expressed different dimensions of that social situation.

AR: I have always admired Hank Greenberg, but do now even more after reading about his relationship with Jackie Robinson, which began after a collision in 1947. Did you gain a deeper appreciation of any particular person? Similarly, was there anyone who you found to be utterly dislikable? 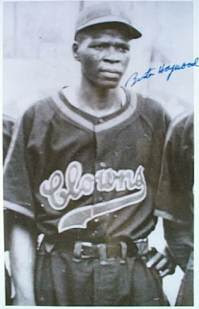 RA: In the course of this work I became fascinated by the life and career of Buster Haywood, who seemed to crop up in all the stories I was telling. He played both for the Belleville Grays (the team of Hebrew Israelites) and the Indianapolis Clowns (owned by Syd Pollock) and was friends with Jackie Robinson. I felt like he accompanied me through the research and writing process, and I ended up writing a separate article about him. Through Buster Haywood I was able to gain some perspective on the difficulties and joys in the life of an ordinary African American player in the era of segregation.

Although the Jewish entrepreneurs often behaved in ways I didn’t always appreciate, I actually found them rather sympathetic characters. I think it’s important not to demonize (or idolize) people you’re writing about.

AR: If I had a time travel machine, I’d go back to 1926 and watch the game between the “Hebrew All-Star Nine” and the Ku Klux Klan that you mention. Are there any games that you wished you could have witnessed too?

RA: I would love to have been at an East-West All-Star game. These games took place in Chicago each summer from the 1930s through the 1950s and featured all of the outstanding Negro League players that I came to admire as I was doing this research. I would have appreciated seeing them in action and also being among the fans who gave them the accolades they deserved.

AR: What do you hope that general readers (i.e., John and Jane Q. Sports Fan) will take away from this book? Likewise, what should American religious historians take from your book?