"Know that this is divine justice."

La Familia Michoacana – religiously-inspired drug-traffickers of the Mexican-American borderlands – are back, sort of. La Familia dramatically appeared on the media’s radar in 2006 when they rolled the severed heads of five criminals onto the 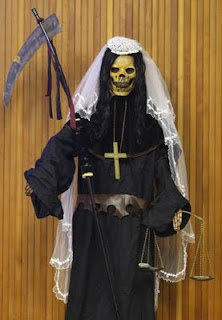 floor of a discoteca with the note: “The family doesn’t kill for money. It doesn’t kill women. It doesn’t kill innocent people, only those who deserve to die. Know that this is divine justice.” Over on ReligionDispatches, Luis Leon has an article on the re-emergence of La Familia Michoacana, who is now the Knights Templar of Michoacan. I was intrigued to see Leon’s take on the “new” cartel society because this is a regional ethos that Leon knows. I recently flipped back through his book La Llorona’s Children: Religion, Life, and Death in the U.S.-Mexican Borderlands for my upcoming comprehensive exams, and I continue to be struck and intrigued by the narrative Leon tells. Religion in the borderlands, Leon tells us, is “creative and often effective means to manage the crisis of everyday life.” His narrative includes the literature of popular chicana author Sandra Cisneros, Catholicism, the healing traditions of curanderismo, folk traditions of espiritualismo, and born-again evangelicos.

In his essay over on Dispatches, Leon explains how the more Protestant worldview of La Familia has developed into the more Catholic-looking Knights Templar of Michoacan (KTM). Leon takes you through parts of the El Codigo de los Caballeros Templarios de Michocan, or The Code of KTM. Last December, I posted here on La Familia, reflecting both on the then-recent death of leader Nazario Moreno Gonzalez (or El Más Loco) 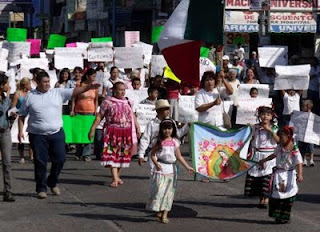 and the integration of his remembrance in celebrations of the feast day of La Virgen de Guadalupe. Just a few days after Moreno’s death, San Antonio law officers attended a workshop exploring “the saints that narcos pray to,” including Santa Muerte, San Simón, and other borderlands icons. When explaining to the local San Antonio paper why the workshop was important, U.S. attorney for the Western District of Texas John Murphy said “It might seem laughable that someone would have these idols. It's remarkable, but true. There's always an advantage about knowing about this.” I don’t think “laughable” is a good description for this aspect of borderlands religion, but at least law officers are getting interested in learning about it.