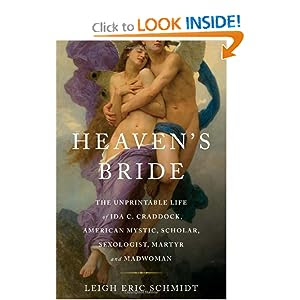 Heaven’s Bride: An End-of-Summer Beach Read for Religious Historians (and everyone else) -- except during the hurricane please don't read it at the beach per se.

I just finished Leigh Eric Schmidt’s thoroughly enjoyable Heaven’s Bride: The Unprintable Life of Ida C. Craddock, American Mystic, Scholar, Sexologist, Martyr and Madwoman. For more about the book Randall posted about the work last year, including an interview with the author here.

In addition to being a great read, Schmidt offers a useful reminder that evangelicalism is only one part of the religious history of America. Though Anthony Comstock, the inspiration behind federal and state laws suppressing vice, and his evangelical allies presented an almost unstoppable force in the late 19th-century, Craddock associated with a loosely organized group of transatlantic secularists, religious liberals, Quakers, spiritualists, occultists, and yogis, who rejected evangelical domination of American life."

A brief synopsis: Schmidt views Craddock as a leading example of a time when sexual expression and American religion did not necessarily clash. Craddock and her associates advocated more liberated, pleasurable sex in monogamous heterosexual relationships, preferably marriage. Despite little or no direct experience with intercourse, Craddock set up shop as a pre-marital and marriage counselor, advising husbands how to please their wives (like Oneida Community founder John Humphrey Noyes, she separated sex and procreation, advocating a longer sex act with no male ejaculation) and instructing wives how to please their husbands (move their hips during intercourse). Craddock viewed the sex act as a form of worship, an experience of the divine on earth. In her physical and emotional marriage to a spirit husband, she practiced what she preached. Unsurprisingly, Craddock’s mother placed her in an institution. Comstock charged her with obscenity.

Contextualizing Craddock’s personal religious journey “from Methodist holiness to Unitarian individuality right on through spiritualist séances and South Asian traditions,” Schmidt examines the notices for religious services in the Chicago Tribune. In the 1870s, the announcements were predictably Protestant, calling Chicagoans to services at Episcopal, Presbyterian, Congregationalist, Baptist, and Methodist churches. By 1900, as Schmidt observes, “all hell was breaking loose,” with announcements for Jewish, Spiritualist, Christian Scientist, Ethical Culture, and Hindu services. Craddock advertised her own combination of spiritual and sexual education at her Church of Yoga with a Bible talk titled “Man and Woman as They Were, as They Are, as They ought to Be.”

One aspect of Ida Craddock’s thought naturally caught my attention: she viewed Quaker minister and pioneering feminist Lucretia Mott as a foremother, quoting her famous line “Truth for Authority, not Authority for Truth” in her death match with Anthony Comstock. This intellectual connection is not as farfetched as it seems. Craddock attended Friends Central School in Philadelphia, founded in part by Mott’s Cherry Street Meeting. Craddock also served as secretary for the American Secular Union, an offshoot of the Free Religious Association, an organization established in 1867. Before her death, Mott traveled to Boston regularly to attend meetings. In 1900, the Free Religious Association memorialized Mott, along with Roger Williams, Hindu reformers Ram Mohun Roy and Keshub Chunder Sen, Ralph Waldo Emerson, Theodore Parker, and Octavius Brooks Frothingham , as “Prophets of Liberalism.”

Schmidt expands our understanding of this heady religious period through the life of the fascinating Ida Craddock. In her work with the American Secular Union, Craddock urged members to ally with “Free religionists, Quakers, Progressive Jews and Liberal Christians” against religious intolerance. Though she failed in her efforts to rally these groups, it is important to note that Comstock also viewed them as linked in their committed defense of the rights of accused pornographers, sexologists, and free lovers. Under the guise of religion, he argued, liberal Protestants were “champions of obscenity.”