What is a Christian Terrorist? 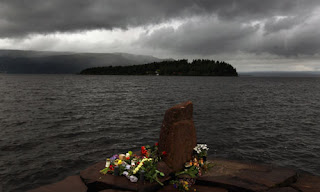 So, this isn't our normal fare here at RiAH, but I couldn't help but draw attention to the concern over the language of Christian terrorism in the American media coverage/speculation about the recent terrorist actions in Norway. What is it about the label "Christian terrorism/terrorist" that bothers so? And how does domestic terror in the U.S. also get coded? (Hat tips to Paul Harvey, Matt Hedstrom, John Koyles, Jeremy Russell, and Mike Altman for links and Facebook conversations that lead to this post.)

“We now live in an age of unprecedented violence….Reliance on coercive power as the primary method of convincing others corrodes the moral fiber of society, creating a world shorn of human sensitivity, justice and a stable order….The penchant for stereotyping the other is frequent, true self-examination is uncommon. ”—Deepak Tripathi

On July 22, 76 people died in a bombing in Oslo and an attack on a Labor Party summer camp on the island of Utoya in Norway. The Guardian labeled the event “one of the worst atrocities in recent European history.” The Norwegian Anders Behring Breivik stands accused of both attacks, and yes, he admitted committing both crimes while also labeling them “atrocious” and “necessary.” Though media speculation suggested early on that the bombing in Oslo was an act of Muslim terrorism, the accused Breivik is not a Muslim. Rather the “terrorist” in question is a blonde-haired, blue-eyed white guy with reported ties to both the European Far Right and Christian fundamentalism. At Religion Dispatches, Mark Juergensmeyer pushes the analysis further by pointing out that Breivik, like Timothy McVeigh, is not just a terrorist but a Christian terrorist. He writes poignantly:

If bin Laden is a Muslim terrorist, Breivik and McVeigh are surely Christian ones. Breivik was fascinated with the Crusades and imagined himself to be a member of the Knights Templar, the crusader army of a thousand years ago. But in an imagined cosmic warfare time is suspended, and history is transcended as the activists imagine themselves to be acting out timeless roles in a sacred drama.

For Juergensmeyer, both young, white, “self-enlisted soldiers” believed that their acts would “triggers a great battle to rescue society from the liberal forces of multiculturalism that allowed non-Christians and non-Whites positions of acceptability.” Both were the opening salvo in a battle to save their respective societies from the lethal grip of leftist politics/policies that they believed prevented white Christian men from attaining their rightful places of power and dominance. While Juergensmeyer and the European news outlets have no problem identifying Breivik with Christianity, specifically Christian fundamentalism, there is a hesitation, a slip even, in some American news coverage. What does it mean that he might be a Christian terrorist? Why would we associate Christianity with a “madman”, “a “lone gun man”, or a deranged individual? What is at stake in associating Christianity with terror? At USA Today, Cathy Lynn Grossman queries:

Who here knows exactly what's meant by Norwegian Christian fundamentalist?…Is he a terrorist because he's Christian or a Christian who happens to be a terrorist or, if he's a terrorist, can he really be a Christian at all? And isn't that exactly the same points Muslims make about terrorists who claim to be Islamic?

The desire to separate Breivik’s terrorist actions from his religious affiliation is telling. Note Grossman’s central question: can a terrorist really be Christian? These questions assume that terrorism and Christianity can easily be parsed out. They are separate becomes a statement of fact. This “fact” then obscures that religion and terror can be intimately bound, informed, constructed, and embodied. The desire to separate says more than the separation. The rhetorical move suggests the clear hesitation in binding Christianity to a powerful word such as terrorism. (I’ve written on why we need to focus on this before here and here.) What emerges as more important, however, is the desire to ignore Breivik and the tragedy he created. Separation leads the way to obfuscation.

On his radio show, Glenn Beck labeled Breivik a “mad man” while also making it clear to listeners that the European Right and the American Right are not comparable (to which I say, what?). Moreover, Beck uses the tragedy to make larger claims about the threat of Islam, multi-culturalism, and the Left in general. “Multi-culturalism and political correctness are killing Europe” rather than the hostility and anger about such that pushed Breivik into defensive action. Beck further claims that the summer camp was a political camp akin to the “Hitler Youth.” His quick reference to Hitler shifts the focus from the massacre of teenagers to the so-called dangerous politics of the camp. He further asks, “Who would do political camps for kids?” The answer seems to be only liberals, who thus endanger their own children. (For the entirety of Beck’s opinions on Oslo and Utoya, click here.)

The Wall Street Journal ran an editorial about how the Oslo bombing was committed by extremist Muslims. Today, they provide an opinion piece by Bruce Bawer, who writes about the threat of “radical Islam” for Europe. Breivik reportedly admired his writings on the Islamic threat. Bawer begins by stating that he, like “pretty much everyone,” imagined that the “Islamic terrorists” bombed Olso. Importantly, he shifts gears to argue that Europe’s multiculturalism is to blame for Breivik’s actions. If Europe continues down the path to “Islamization,” then Bawer assures the reader that extremists like Breivik will continue to act. After all, Europe isn’t protecting citizens from the “rise of Islam.” For both Beck and Bawer, the accused terrorist is not the most important component of a tragedy that claimed 76 lives. Rather, these actions (while “atrocious” and “necessary” in Breivik’s own terms) become the stepping stones to critique Islam’s so-called threat to both Europe and America as well as a way to bash the despised political correctness that supposedly suffocates modern culture. The real tragedy is the larger fragmentation of society because of dreaded multi-culturalism's attachment to diversity and difference, not the loss of life. A white Norwegian man killing fellow Norwegians to defend the nation (and even a continent) from its citizens gets lost in the translation. A white Christian extremist becomes an outlier, and there is no articulation of the possibility of Christian terrorism. It doesn’t exist in this rhetorical overindulgence.

Obscuring the obvious questions becomes part of a certain nationalist agenda, in which Muslims remain deeply wed to terrorism. In the case of Oslo and Utoya, Muslims and terror were invoked (and continue to be invoked) in spite of the fact that no Muslims were involved. Ignoring even the possibility of Christian terror ignores the way in which terrorism has political, racial, and religious baggage. By making Breivik simply a crazy individual, we avoid not only his act of Christian terrorism but also the daisy chain of white Christian (male) terrorism in Europe and the U.S. We should quit labeling these events as sporadic, random, and loosely connected, and instead, wonder what connects McVeigh, Eric Rudolph, the Hutaree (white Christian militia), Breivik, and the Ku Klux Klan. The answer might be a potent imagining of white Christian nationalism that assumes only white men can defend, save, and destroy us. Thus, they act, retaliate, and harm to recreate/fight for a fabled white Christian nation (or continent), free from the troubling demands of diversity. The yearning to get back to a moment of power and dominance (even though, in many instances, white men are still the folks in power) leads to not only inflamed and insensitive rhetoric but also violence and brutality. Perhaps, we should find the connections in their imaginings to understand why they fight/maim for a “cosmic battle” between good and evil. Perhaps, we should rid ourselves of the assumptions about Muslims and terrorism because with these casual assumptions we might never be able to reckon with the possibility, much less the reality of Christian terrorists.