What do the Pope, Obama, and Johnny Rotten Have in Common?: Observations on Gender and the Antichrist Thanks to Kelly Baker for suggesting a series on masculinity and religion during Paul's hiatus. Here's the first of my installment.

Americans’ fascination with the Antichrist has only grown over the past decade with an increasing number of pop culture references and politicized rhetoric surrounding the evil symbol of a coming Armageddon. Obama was/is accused by some as being the Antichrist—Obama beginning as relatively unknown politician who rose to power swiftly and won the hearts of many Americans with a message of hope. He made promises that were too good to be true, many said, and some accused him of acting like a messiah to lure unsuspecting Americans into his trap. (Google “Obama and Antichrist” if you haven’t before. It’s amazing what people can do with Photoshop.) The racialized overtones of this depiction of the president cannot be overlooked. Many Americans were terrified of Obama’s candidacy and election because he was an “other” in their worldview and so their fear blossomed into anger and denouncements of the “Yes We Can” Man as evil. Racist motivations aside, Antichrist accusations and personas have power (to scare, to motivate, and to actually empower) and much of that power resides in the masculine meme of the position.

White Women, Rape and the Power of Race in Virginia, 1900-1960 as well as cultural works on more recent America like Michelle Alexander’s thought-provoking new book, The New Jim Crow). But beyond the masculine world of racialized sexuality and crime there are other gendered factors that contribute to the current Antichrist discourse.

An alternative view of the Antichrist is that promoted by the Wisconsin Evangelical Lutheran Synod (WELS). Current Republican presidential candidate contender Michelle Bachman once belonged to this group but recently demanded a written statement from the synod about a year ago asserting that she was no longer affiliated with them or their anti-Catholic beliefs.

The WELS doctrine regarding the Antichrist states:

“Since Scripture teaches that the Antichrist would be revealed and gives the marks by which the Antichrist is to be recognized, and since this prophecy has been clearly fulfilled in the history and development of the Roman Papacy, it is Scripture which reveals that the Papacy is the Antichrist.”

The Pope is perhaps the most powerful religious figurehead alive in the Western world and by imbuing him with the religious authority of the Antichrist, the WELS has given him even more influence, although that is obviously not their intention (see http://www.theatlantic.com/ for the full story). The Pope and Catholics and many other Christians (including Lutherans) certainly do not view the Papal position as connected to the Antichrist, but the debate alone grants the Papacy more power because it is simply being debated. The Pope and the Catholic leadership, too, have a preponderance of masculine authority despite their sworn celibacy. The Church has maintained its commitment to male authority since its founding and continues to rely on an all-male cast of Pope, Cardinals, and priests, etc., giving nuns duties that reflect a more maternal role (teaching and nursing, for instance). The Pope, I contend, would not be accused of being the Antichrist if it was not necessarily a male occupation and if the Catholic Church did not imbue it with masculine power.

And it is here where I will play “devil’s advocate” (pun, sadly enough, intended): Antichrist imagery can also be used as a hyper-masculine badge of honor. Take, for example, the role that Antichrist played in the punk music scene of the 1970s. The Sex Pistols’ lead singer, Johnny Rotten, even went so far as to declare himself an antichrist in “Anarchy in the UK”:

“I am an anti-christ

I am an anarchist

Don't know what I want but

I know how to get it

I wanna destroy the passerby caus’ I

I wanna BE anarchy!” 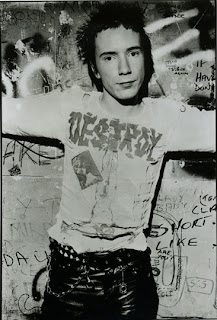 The Sex Pistols might have been Nietzsche’s favorite band. In The Antichrist, the nihilist wrote: “What is good?—Whatever augments the feeling of power, the will to power, power itself, in man.” Ultimately, the concept of an Antichrist is a positive one to Nietzsche because it empowers man to challenge a blundering God whom impedes science and knowledge. Although Nietzsche is not speaking directly of the biblical Antichrist, he is pressing the notion that anti-Christian, anti-God, anti-religious views are what give men control and intellect. The Antichrist may be the supremely masculine symbol—with power and virility and ferocity representing his most cited characteristics.

The dangers of this discourse, however, are immense. As seen with Obama, declaring a public personality to be the Antichrist only engages widespread animosity and fear, which, when combined, can lead to vehement and violent reactions. So maybe the WELS should reconsider its charged doctrine concerning the Pope as well as those who have labeled the president as the Antichrist.

Historiann said…
"The Sex Pistols might have been Nietzsche’s favorite band.

They're one of my fave bands, evah!

Fascinating post, Charity. I think you're right about the imagined virility of the antichrist--I keep thinking about those old 18th C Pope's Day caricatures of both Satan and the Pope/Antichrist, for example.

When women are evoked as powerful villains (Mme. Pompador, or Delilah) they're never portrayed as strong in a masculine way--they're usually portrayed as having the power to sap men's virility/overcome their virtue.

Thanks also for the intel on the WELS. I had heard that they were even more conservative than the Missouri Synod, but had no idea about their anti-Catholicism.
July 18, 2011 at 1:39 PM

Kelly J. Baker said…
At Mother Jones, there is an article about Mike Bickle, an official endorser of the Rick Perry prayer day, who claims that Oprah is leading the way for the anti-Christ. Oprah is the one of the "forerunners of the Harlot movement." What is so striking about this is that Oprah cannot possibly be the anti-Christ because she is a woman.

As someone who has waded through a lot of Christian apocalyptic lit as well as the ever increasing prophecy books, I am always surprised that the anti-Christ must be male, but it seems that gender-bending might really work to obscure the anti-Christ's presence. (This, of course, is we choose to follow the logic that the anti-Christ will be an unimpeachable person whom everyone likes, except from discerning Christians a la Buck and Rayford in Left Behind).

Brenda said…
I am not WELS, but grew up in Lutheran circles and have read Book of Concord which are the essential Lutheran documents from the 1500's prior to the RC counter-reformation. What you read about the papacy in the WELS statement would be a reflection of the medieval situation trickling down to today in that particular group. Thought you'd like some background.
July 20, 2011 at 10:22 PM