This morning in Tallahassee was wonderfully pleasant in temperature due to storms passing through the area last night. However, the air quality was horrible, as smoke from nearby wildfires covered the city in a smelly haze. The Florida Division of Forestry has deemed wildfires an area hot topic, and a big part of the problem is a drought. Raised in south Texas, I view droughts not as occasional; they’re the normal environmental state of being. But isn’t Florida supposed to get enough rain? I mean, the Everglades and swamps are here. And Florida isn't the only state in a drought. The majority of Texas has been in a severe drought for months, with many places ranking at the highest severity level (exceptional).

When in need of rain, what can mere humans do? Apparently, pray. Just two months ago in 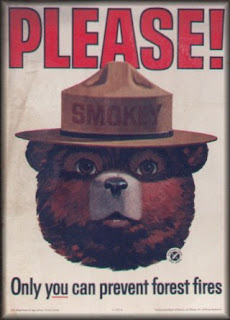 April, Texas governor Rick Perry declared “the three-day period from Friday, April 22, 2011, to Sunday, April 24, 2011, as Days of Prayer for Rain in the State of Texas,” and “Texans of all faiths and traditions” were “to offer prayers on that day for the healing of our land, the rebuilding of our communities and the restoration of our normal way of life.” Crop failure and wildfires are plaguing the state, and since (according to Perry) “Texans have been strengthened, assured and lifted up through prayer,” it only made sense to pray for rain. In the wake of a hopeless exceptional-ranking drought, prayer would be the answer. Move over Smokey Bear, enter St. Jude.


Perhaps it’s fitting that today I read Robert Orsi’s Thank You St. Jude: Women’s Devotion to the Patron Saint of Hopeless Causes as I prepare to take my doctoral comprehensive exams this December. I may not have been in Indy for the RAAC that I have so jealously read reports on from fellow bloggers, but Orsi has been on my mind too. If you haven’t read Thank You St. Jude, I highly 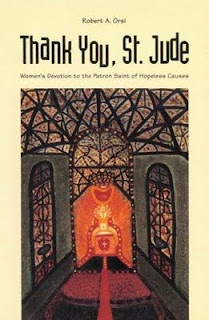 recommend it. Personally, I like it better than Madonna of 115th Street. In it, Orsi investigates the devotional worlds of women who have called upon St. Jude. In doing so, Catholic women (“the immigrants’ daughters”) have appropriated the saint, and Orsi explores how they use their devotions to regain their voices and how their appeals to Jude can also push them further into their state of hopeless despair. In analyzing the functions, results, and workings of the women’s devotions, Orsi in the end embraces the ambivalence of it all. Jude and the women who ask for his intercession live in unstable and “in-between” worlds. The questions of bracketing belief and passing judgments that seem to have come up again at this June’s RAAC (and reminiscent of the famous “Orsi-Prothero Smack-down” in the HDB) permeate the pages of Thank You St. Jude as well. When he laments how a woman asked Jude to keep her husband faithful instead of confronting the husband, is Orsi passing judgment on the oppressive nature of this woman’s devotion or he is simply embracing the “in-between ground” he endorses in Between Heaven and Earth? Truly, the intersubjectivity beloved by anthropologist Michael Jackson remains a blurry area hard to define when deployed in religious studies and American religious history – though it is a task and goal that I love and applaud Orsi and others for engaging.

After finishing Thank You St. Jude, I visited the website for the National Shrine of St. Jude in 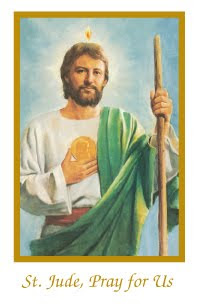 Chicago that begins Orsi’s narrative, and the shrine is in need of help. In his book, Orsi argues that Jude needs the devotion and sustenance of the women who call on him, just as the women who ask for his help need him. Both the women and Jude inhabit a space of vulnerability – the women at the edge of hopeless despair and Jude the long-forgotten saint who could slip back into obscurity. It seems Jude needs help more than ever right now. Upon opening the shrine’s website, one immediately learns that the shrine is $60,000 under budget and is in need of donations. The shrine is once again selling the healing St. Jude's oil, a product that was not available when Orsi was writing. Another possible way to donate is to electronically purchase a “virtual prayer candle,” which comes complete with a 3, 9, or 30 day novena. Though I am an immigrants’ great-great-granddaughter of German and Czech Catholic heritage, I haven’t purchased one yet. But, perhaps come late fall with a hopelessly large pile of comps reading still to tackle, I might take Jude up on that offer.
Email Post
Labels: books catholicism emily's posts material religion religion and the environment

Unknown said…
Orsi's Thank You, St. Jude: one of my all-time favorite historical works. I recently recommended his first book, The Madonna of 115th St., to a friend whose father grew up on 110th St. during the period covered by the book. Such a great scholar.
June 16, 2011 at 8:32 PM