Paul Harvey
What do Reinhold Niebuhr and Gillian Welch/David Rawlings have to do with each other? Nothing, you say, and that would be correct; everything, I say, and that's probably a stretch to say the least, but it's a reflection that came this morning reading/listening to two entirely unrelated pieces (update: now, three pieces, see the update below).
In "Religious Realism," over at The Book, Alan Wolfe reviews Why Niebuhr Now?, a posthumuously published work by the intellectual historian John Patrick Diggins. Wolfe provides a thoughtful review both of the book's strengths and weaknesses, as well as a nice short examination of Niebuhr himself, including a couple of sentences related to the subject to come shortly: "Niebuhr was of course serious, at times ponderous, himself. Yet he consistently warned against the kind of seriousness that dismisses the ironies inherent in human existence." 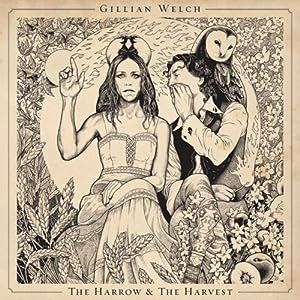 I happened to be reading that while listening to The Harrow and the Harvest, the new and long-awaited recording by Gillian Welch and David Rawlings -- you can listen to it in full (for the next couple of weeks or so, I think), here, courtesy of NPR Music (big HT to Deg for pointing me there).

Welch's musical persona always has been inspired by the kinds of struggles, personal journeys, dreams, and frustrated longings of characters that seem to step from the interwar years, updated a bit sometimes but carrying the kind of message and leading the kinds of lives of people that Reinhold Niebuhr's southern-born students (including Howard Kester and many others) and their comrades and co-workers (including Claude Williams and Owen Whitefield, discussed at full length in Jarod Roll and Erik Gellman's new book The Gospel of the Working Class: Labor's Southern Prophets in New Deal America) worked and lived among during some of the tougher years of the twentieth century. Heath will be posting a full-length interview with the authors of that book soon, so stay tuned for that.
"Hard times ain't gonna rule my mind," Gillian Welch sings, reflecting the characteristic determination of her song-characters to survive the vicissitudes that befall them, both those dictated by fate and those they bring on themselves. These are stories of American religious realism, in this case perhaps more personal and less archetypical or self-consciously mythical than in some of her previous records. At their best, the songs poignantly reflect on the ironies inherent in human existence.
UPDATE: Jim Sleeper of Yale University sent me his review of the same book by Diggins, about Niebuhr, which just confirmed the conclusions I reached above about Niebuhr's theology as lived out in the characters in Welch's songs. More than a simple review, Sleeper's short piece aptly summarizes some of the most important conclusions Niebuhr reached in his work, and how they apply today. As Sleeper explains:
The faith, although Christic and biblical, turned paradoxically on humans’ experience not of God’s presence, but of his absence. Niebuhr’s “religious vocation was to doubt religious certainty,” as Diggins puts it: “Genuine religion is always a struggle between belief and unbelief.”
That struggle is inevitable, Niebuhr held, because, on the one hand, our individual finitude and mortality make us experience the wonder, love, and yearning that generate religion, art, and compassion. On the other hand, because we’re limited and doomed as creatures, we’re also willfully or wistfully doomed as creators, with no external vantage points or leverage on history. That predicament generates incessant flights into illusory self-importance, power, omniscience, and material security—and therefore into idolatries of rugged individualism, liberal universal nationalism, the invisible hand, the dictatorship of the proletariat, the global village, and techno-nirvana.
As Welch sings, "the Great Destroyer sleeps in every man."
Email Post
Labels: music niebuhr religion and death religion and popular culture religion and the great depression

LD said…
Well this is a timely post. Thank you for contributing to the development of my long-neglected music literacy. Listening to the NPR preview right now -- good stuff.
June 27, 2011 at 2:53 PM