Skip to main content
Labels
Posted by Paul Harvey May 18, 2011 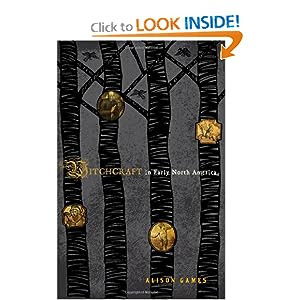 Some of you may be looking for a good classroom resource for teaching about popular religion or witchcraft in early America. If so, this might be the book for you, so I'll reprint the Choice review below of Alison Games, Witchcraft in Early North America, put out as a pretty short classroom-usable volume by Rowman & Littlefield in their "American Controversies" series, edited by excellent historian Douglas Egerton. These volumes come with primary document selections, chronologies, and other pedagogical helps. (I have a volume coming out in late summer or so in the Rowman & Littlefield African American History series, entitled Through the Storm, Through the Night: A History of African American Christianity -- more on that as the pub. date gets closer, but the experience of the close editing of that book, with an eye towards readability for a general non-expert audience, gives me confidence in these other volumes that R & L is putting out).

Anyway, here's more on this volume, and check the book's website here for table of contents and more info. What particularly attracts me here is the clear effort to provide a broader context for popular religious beliefs in the supernatural throughout 17th century America, and including Natives and African peoples as well as British North Americans. In other words, this isn't your father's Buick, the usual Salem-centric story of witchcraft in the colonies.
________________________________________

Games, Alison. Witchcraft in early North America. Rowman & Littlefield, 2010. 216p index afp; ISBN 9781442203570, $36.95. Reviewed in 2011jun CHOICE. Games (history, Georgetown Univ.) makes a vital contribution to the pedagogical resources on early American witchcraft. With its introductory essay and interdependent collection of primary materials, the book demonstrates how accusations of witchcraft mediated colonial encounters between mutually illegible cultures: characterized by flagrant "coercion and cruelty," such conflicts demanded justification and frequently provoked resistance, and therefore lent themselves to prevailing supernatural explanations and persecution. Games's historical introduction broadens the scope of witchcraft study beyond New England to incorporate less familiar outbreaks in New France and New Spain. The author traces as well the conflicting beliefs European, Native, and African peoples brought to these encounters. A modest selection of Salem materials are among the 29 brief primary documents, which include legal documents, reports of first encounters, and possession narratives from across the continent. Games's premise is that the historical record tells the story slant; accordingly, this volume represents a necessary and ethical, albeit brief, attempt to counter the Anglo-centrism that has characterized witchcraft historiography. The author resituates episodes of witchcraft in the context of cultural contact and conflict in which they occurred, incorporating them into larger scholarly trends in the study of early America as a space of contact zones. Summing Up: Recommended. All readers. -- A. T. Hale, University of Puget Sound
Email Post
Labels: lived religion popular religion religion and death religion and popular culture religion in colonial America Salem salem witch trials