Rapture Ready (Or Not) 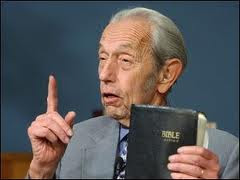 While Paul, Chris, and Emily review excellent books in American religious history, I have spent a couple of days basking in the news coverage of the impending Rapture, at least according to the octogenarian Harold Camping and his Family Radio. As many of you likely know (thanks to Emily and Charity or the deluge of media coverage), Camping has proclaimed that the God’s Judgment signaled by the Rapture, the “catching” or “snatching up” of righteous Christians, will occur this Saturday, May 21, 2011. This is not the minister’s first calculation for the beginning of the end (1994), and it will likely not be his last. The beauty of millennialism is not in its rigidity but its malleability and adaptability. Camping fits securely into a long line of doomsday prophets, millennial visionaries, and according to the less gracious, religious hucksters who prey on people’s fears, money, and naiveté. Huckster or not, I don’t really care. Rather, I do care about what Camping’s media-frenzied stint says about the pervasiveness of millennial fervor in North America and the popularity of the vengeful fantasies of judgment that inundate apocalyptic belief, practice, and products.

As someone with an ongoing scholarly obsession with the apocalypse, consumption, and materiality, I am surely following my bliss this week with each mention, web click, Facebook status update, and journalistic attempt to understand the appeal of Camping and his billboard/caravan campaigns. The coverage of the impending Rapture runs the gamut of pet care services for the dogs, cats, and iguanas of the Raptured to Richard Dawkins’ grumpy commentary about said press coverage to Killing the Buddha’s Apocalypse Week 2011 to Salon’s explanation of Camping’s mathematical equations and dating of the end. The coverage ranges from somewhat sympathetic to downright hostile. Some admirably tie Camping a larger history of millennialism in North America, while others declare him a false prophet outright.

In August, I have an article coming out on rapture readiness (seems a little late considering the climate now), in which I document two other sources of Rapture information and practice, the prophecy work of Tim LaHaye and RaptureReady.com to document how the Rapture emerges as not only rhetorical and absent but also material and present. Why, for instance, is there such a thing as rapture practice or rapture pranking?

LaHaye is the co-author of the Left Behind books and avid author of prophecy books including one aptly titled The Rapture, and I have blogged about him before. In the competitive market of prophecy knowledge, LaHaye and the team at RaptureReady.com all deride Camping’s dating of the end. LaHaye notes that Camping has been wrong before and further proclaims:

You can be sure the rapture will not occur when anyone sets a date because God wants us all to live every day as though Christ could come today. A great motto for daily living is PERHAPS TODAY. For one day it will happen and we don't know when, but we don't want you to be left behind!

LaHaye’s reaction to Camping is not really surprising since they have competing visions of the Rapture for Christian consumption. Even RaptureReady.com, the self-proclaimed most visited (Christian) prophecy site on the web, provides a fascinating take down of this particular dating of the Rapture (“we can’t possibly know the date” is the usual refrain). Moreover, the founder Todd Strandberg writes:

In a dubious way, Camping is helping to set the stage for the Rapture. His failed predictions are helping to create the element of apathy that Jesus warned about. I read a report this week that said America is on track to have its most costly year ever for natural disasters. If people knew the Bible, they would understand the likely root cause of these disasters.

Strandberg designed the site to provide Christians, and those who might become Christians, with all the tools they need to become rapture “ready,” which includes belief in God, commitment to Jesus, and righteous action and living. RaptureReady.com houses information on biblical prophecy, readiness, and survival tips for the Tribulation period for those who are unlucky enough to be left behind.

While Camping might appear less credible if the 21st comes and goes without the Rapture, LaHaye and Strandberg will continue to plug along prophesying an almost-but-not-yet end. I can’t help but wonder whether Camping’s ministry has aided in the sale of the Left Behind series or the web traffic to RaptureReady.com, which posted record-breaking site visits earlier this year. While prophets of doomsday come and go, the idea and artifacts of apocalypse remain. Perhaps, the larger lesson for May 21st is the fervent wish for the end cannot be tamped down by disappointment or lack but reinvented in another form for another (or a remarkably similar) set of consumers. Rapture or not, just remember the Mayans and the zombies are lurking around the corner for their respective turns at the end.

esclark said…
I hadn't even thought to look at what LaHaye and others were saying about Camping and crew. Not only do they have competing visions, their visions also dictate their different methods of proselytizing. LaHaye sells you his vision via books, and so not setting a date but continuing to call the rapture soon works with his method. Family Radio on the other hand hits the streets with urgency and tries to briefly communicate with everyone they can. Not only do their visions compete, but this feeds into their approach to the masses. Great post Kelly. I can't wait to read your article.

Also, my newspaper today featured a half page ad for Family Radio warning how tomorrow is Judgement Day. I wonder if they'll have another one tomorrow. Not to sounds too snarky, but an "I told you so" ad from them would be fantastic.
May 20, 2011 at 8:30 AM

Kelly J. Baker said…
Emily, LaHaye uses the slogan, "perhaps today?", for his prophecy books in particular. We can never really know until the righteous are caught away or snatched. What is interesting is that LaHaye sells an assurance of one's status as likely to be raptured. Buy the books to miss Tribulation. Camping's campaign doesn't seem to be about reassurance unless you support/believe/proselytize Family Radio. I think the lack of dare setting and assurance is why LaHaye has wider appeal (and oh, the little book series called Left Behind).

esclark said…
Apocalypse insurance from LaHaye for yourself and peace of mind for your pet from After the Rapture Pet Care - what more could you ask for?
May 20, 2011 at 11:02 AM

jspiers said…
Two quick points. In relation to May 21 phenomena, Lauri Lebo of Religion Dispatches also noted the "rapture parties" and raised the question of which cocktails and musical suggestions were most appropriate. In addition, she pointed to a Craig's List ad where an individual was offering to buy everything which soon to be raptured individuals possessed at a steep discount.

Second point. I've often wondered if the "post-trib rapture" which arose in the mid 1800's and which LeHaye holds to didn't arise specifically because of the dynamic over the date. Almost all of the prognosticators base their time line on the beginning and end of the tribulation as big landmarks in their prophecies. (For Camping it is a 23 year tribulation and a rapture 6 months before the end, when I was growing up, we were taught tribulation in 1993, and rapture somewhere around 2000, since God is apparently on the a mild variation of the Gregorian calendar.) At any rate, a literal reading of Jesus' statement about the immpossibility of knowing the time or season of the coming of man created a paradox for many believers, who also believed that the rapture would occur at some set period, usually seven years, after the beginning of the "great tribulation." Ergo, perhaps, the "pre-tribulation" model, which solves that problem, but leaves the bigger one of what happens to repentant and/or revived Christians who believe in Christ during the tribulation.

For any brand of Christianity which insisted upon a "perfection", "second works", or "infilling of the spirit" doctrine there was an easy answer... no one would be saved after the rapture, they would just suffer the wrath of a loving God who wanted to torture them for not accepting his love. For the moderate evangelical crowd, especially those of Baptist heritage, there was a problem here, as well, since all they need for salvation is "belief in the Lord Jesus Christ." LeHaye's tale of "Rapture Force's" helped solve that dilemma as well.