Skip to main content
Labels
Posted by esclark May 19, 2011

Emily Clark
I apologize for the length, but the book took two decades and is 500 pages – not something quickly summarized!

Manning Marable died of health complications just days before the release of his magnum opus Malcolm X: A Life of Reinvention. I posted about it during the few days between his death and the book’s release, but getting around to reading the book had to wait until the spring semester wrapped up. Marable’s task is clear from the title of the prologue; he sought to discover the “life 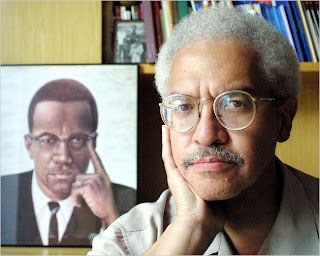 beyond the legend.” With a particular focus to Malcolm’s religious and political evolution over his short 39 year life, Marable found that reinvention best describes Malcolm’s life. No single stage in Malcolm’s life “ever captured him fully.” Arguing that Malcolm’s personal story “is a brilliant series of reinventions” at first may seem a simple claim. After all, don’t all people undergo changes throughout their lives? The strength of Marable’s book comes from his painstaking contextualization of each reinvention, the main reason why the book runs 487 pages prologue to epilogue. These multiple layers obscure the historical Malcolm, but Marable demonstrates how each reinvention emerged from the previous one and this narrative is able to make sense of all these Malcolms. Malcolm Little, Jack Carlton, Detroit Red, Malik Shabazz, Omowale, Malcolm X – none of these alone can describe Malcolm’s life. The reinventions don’t emerge as abrupt but rather the culmination and intersection of multiple factors – be them economic, familial, racial, religious, political, or often all these at once.

In Marable’s telling, the transitions in Malcolm’s perspective from strict racial separatism to a more humanistic worldview are presented in context with the rest of his life story and the environment around him. His Garveyite parents, the poverty of his childhood, his self-education in prison, his admiration for and later criticism of Elijah Muhammad, his hajj, his respect for Ghana, etc. all shape his reinventions. Marable identifies and explores the increasing instances in Malcolm’s speeches and writings where he becomes more interested in human rights and global unity than radical black separation. His departure with the Nation of Islam does not come as a surprise in Marable’s telling. More than just his hajj experiences praying with Muslims of different races and the resulting epiphany and more than just the possible jealousy Elijah had of his famed minister, Malcolm’s schism with the Nation of Islam fits with his developing political and religious philosophy. Despite their talk about militancy, the Nation of Islam continually failed to act in Malcolm’s view; Malcolm wanted to engage the system around them. Fellow black Americans needed action, and he wanted to be a part of it. His pan-Africanism and pan-Islam perspective and his humanism all develop as his way to respond to the needs of black Americans. While Dr. King wanted America to become blind to race, Malcolm wanted to end all racism.

Along the way, Marable discredits some of the popularly accepted knowledge about Malcolm. Marable calls into question the accuracy of the famous Autobiography. In Marable’s estimation, this book was hardly an autobiography and the “as told to” author Alex Haley took a very active role in its creation. Haley disagreed with Malcolm on many political issues, and their goals for the book differed. According to Marable, Malcolm severely exaggerated his criminal past because this would help present his life as “a tale of moral uplift” – a gangster lifted from his ghetto p 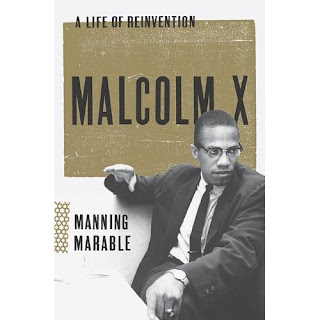 ast by Elijah Muhammad, while Haley wanted to illuminate “the tragedies produced by racial segregation.” In addition to his appraisal of the Autobiography, other provocative elements in Marable’s book involve Malcolm’s sexuality and his death. Marable suggests that Malcolm had a homosexual encounter in his earlier years and that the story about Rudy in the Autobiography was really about Malcolm and wealthy white William Paul Lennon. Adding to this, Marable’s depiction of Betty and Malcolm’s marriage is that of a tenuous one. Malcolm feels obligated as a minister to get married, and he is largely absent from his family’s lives, leaving town shortly after the birth of each child. Marable also believes that the assassination was not only horribly investigated (a cleaning staff mopped up some of Malcolm’s blood four hours after the shooting to prepare for the ballroom’s next reservation), but that most of the assassination conspirators and shooters remain uncharged for their role. He names these Newark Mosque members and attempts to recreate their planning and execution of Malcolm’s murder.

Marable’s book has received largely positive reviews, and I think they are deserved. Marable makes Malcolm human – he isn’t a saint or a demagogue, but a flawed, complex, at times beautiful, and at times troubled human being. Beyond the larger than life image, the powerful speeches, and the political action was a person, and in Marable’s book, you get a sense of that person, his trials, and his triumphs. Marable spent much time reflecting upon and wrestling with his own personal opinion of Malcolm. One can read both disagreement with and admiration for Malcolm in Marable’s biography, and despite his flaws, Marable saw Malcolm as “a representative for hope and human dignity.” But Marable may have stumbled at times with his objectivity in regards to Malcolm and Elijah Muhammad. There is a sense of disappointment laced in Marable’s assessment of Malcolm’s brief 1961 meeting with the KKK – “Malcolm’s uncritical adoption of Elijah Muhammad’s conservative, black separatist polices led him to an ugly dead end” – it is Elijah’s dogma that is the source of Malcolm’s bad choice.

Some reviewers call Marable’s prose bland and at times uninspired and find his depiction of international politics vague. These are fair criticisms, and though some may find Marable’s prose “bland,” it also flows smoothly and hardly seems 500 pages. Most of the negative feedback to Marable’s book focuses on the brief mention of Malcolm’s possible homosexual encounter and his allegations against Malcolm’s uncharged “murderers.” One particular negative review comes from Karl Evanzz, whose review “Paper Tiger: Manning Marable’s poison pen” was rejected by TheRoot.com. Later published on Evanzz’s blog, he calls the book “an abomination” and “a cavalcade of innuendo and logical fallacy, and is largely ‘reinvented’ from previous works on the 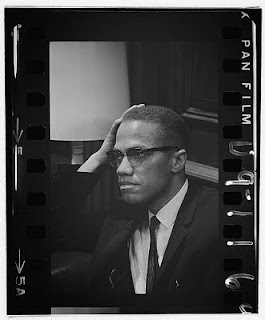 subject.” Evanzz was most upset with Marable’s speculation on Malcolm’s life – claims he bluntly called “lies.” I am grateful for and I am intrigued by his investigation into Marable’s speculations, but I think Evanzz perhaps downplays Marable’s main point. According to his review, “Marable has two primary arguments: (1) the intelligence community and the New York Police Department deliberately ignored serious threats against Malcolm’s X life, and (2) there is overwhelming evidence that the five assassins came from the Nation of Islam’s Newark mosque. That’s it.” At the risk of sounding like a Marable apologist, I don’t think these were the primary goals or arguments of Marable’s book. Though Marable certainly wants to draw attention to the assassination and its investigation, the point of his book was to identify, contextualize, and explore the reinventions of Malcolm’s life and how they illuminate his developing political and religious views. To focus on just Marable’s depiction of Malcolm’s sexuality and/or the assassination conspiracy misses what this book offers. Zeroing in on these claims would be like only focusing on just brief flashes of Malcolm’s life; both miss the big picture.

Marable calls Malcolm “the embodiment of two central figures of African-American folk culture, simultaneously the hustler/trickster and the preacher/minister.” Furthermore, Malcolm “embodied the spirit, vitality, and political mood of an entire population – black urban mid-twentieth-century America.” And answering how Malcolm can embody so much can certainly be found in the pages of Malcolm X: A Life of Reinvention.

Kelly J. Baker said…
Excellent review, Emily. I look forward to reading the book. I wonder if Malcolm X requires 500 pages to create the complicated nature of his life what that means for the rest of us :)
May 19, 2011 at 11:03 AM

Brantley Gasaway said…
Thanks for this review. I assign The Autobiography of Malcolm X in several classes, and so I need to re-think how I am going to teach it.
May 19, 2011 at 11:35 AM

esclark said…
If you want to pair a short Marable reflection on the Autobiography, try his chapter in his 2009 edited volume Black Routes to Islam. In it, he talks about the Autobiography and reflects really nicely on the meanings of Malcolm since his death. http://us.macmillan.com/blackroutestoislam
May 20, 2011 at 8:20 AM