Heaven is a place... 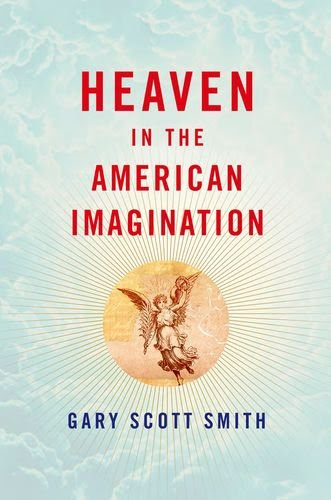 So, with rapture week and its pet preparations behind us, what's next? It seems to me that we were all so worked up about the end that we forgot about what comes after the end: Heaven. In his new book Heaven in the American Imagination Gary Scott Smith outlines (mostly Protestant) American ideas about heaven from the Puritans to Michael Jackson's memorial. In the process, Smith effectively gives a narrative account of American Christian history by following heaven. By tracing the changing images of heaven in American minds, Smith narrates changes in American Christianity and culture.

Two questions about heaven recur again and again as Smith moves through American history and become the themes that tie the book together.

How do we get in?
Americans have had two major responses to this question. First, some have said that good people or people who do good things will make it to the place where "the streets have no name."  For others, only acceptance of Jesus Christ as Lord and Savior will grant one entry through the pearly gates. While it is easy to cast liberal Christians or non-Christians on the good works side and evangelicals or conservatives on the other, Smith's account offers a bit more nuanced view. He notes that the Cotton and Increase Mather, Jonathan Edwards, George Whitfield, and Charles Finney all lamented the number of Christians who thought they could rely on their good works for heavenly admittance in the life to come. The split, then, was not between liberals and conservatives or Arminians and Calvinists, but rather, it was between the pulpit and the pew. American preachers from Edwards to Billy Graham kept preaching salvation by faith in Jesus was the only airline to heaven because Americans consistently believed they could reach heaven by being good.

Scott also presents other beliefs about qualifications for celestial citizenship that didn't require Jesus. For example, many slaves believed that their suffering in this world was enough for admittance to heaven in the next. Also, during the Civil War both sides proclaimed that death in battle would send one to heaven. In the 20th century, according to Smith, the "be good" theory of heaven triumphed in American popular culture and, at the same time, the idea of hell lost most of its influence. Perhaps that's why everyone was so excited and self-assured in the past week--we all thought we were good enough to get into heaven and no one really considered the other option.

What's it like up there?
Through the first three chapters of Smith's chronological narrative heaven remains fairly stable. With some variations of emphasis, clergy and theologians from the Puritans through the early national period all thought of heaven theocentrically. That is, heaven centered around the Triune God. The saints would worship the father, enjoy communion with Jesus, and experience the joy of the Holy Spirit. Jonathan Edwards emphasized God's heavenly love while Charles Finney focused on heavenly rewards, but until the Victorian era American clergy agreed that heaven was about humans being with God.

American Christians had always looked forward to meeting biblical heroes like Abraham and the Apostle Paul in heaven, but they soon began to look forward to meeting each other. As the American home became more important through the emergence of the cult of domesticity and the cult of True Womanhood, heaven became less about eternity spent with God and more about eternity spent with loved ones. Heaven became the perfect peaceful and loving Victorian home where all the family would be together again and the home became a place where one could experience heavenly love in this world. As American's lost sons, brothers, and husbands in the Civil War this notion of heaven gained in power.

As Americans became busier their ideas of heaven shifted again. A place of eternal dwelling with the presence of God seemed boring. It seemed like a place where nothing ever happens. Smith narrates how the rise of industrialization, the reforming furry of the Progressive age, and the fast pace of the 20th century prompted Americans to imagine heaven as place of activity.  For Christians in the Gilded Age heaven was a place of joyful work. For Progressives it was a place of service and ministry. By the twentieth century various groups imagined heaven as a place of worship, work, growth, or play. And by the twenty first century it was "the ultimate playground" of celestial bliss. Americans continually remade heaven in the image of the desires of their earthly lives.

Smith does an admirable job of covering a lot of ground in the book--as the breadth of material shows. However, his narrative of American understandings of heaven is embedded within a larger narrative of American religious history that is a bit too Puritan. We start with the Mathers and proceed through the usual cast of white male clergy (Edwards, Whitefield, Finney...). Indeed, mainstream Protestant clergy and theologians are the central subjects of the book. There's little mention of laity or of outsider groups like the Shakers or even the Ghost Dance (which would add much to the discussion of heaven as a place of family reunion.) Furthermore, there is an underlying back-and-forth between "liberals" and "conservatives" in the narrative where the liberals are most often "assaulting" orthodoxy. Nevertheless, the book provides a remarkable example of how one can tell a history of religion in America by picking one theme and tracing it out over the centuries. The shifts from theocentric, to domestic, to workaholic heavens reveals larger shifts in American culture and values. Also, the moments where Smith is able to bring in views of heaven that depart from the mainstream, such as the New Age or his analysis of Michael Jackson's memorial service, are fascinating and provocative. It is an accessible book that would be worth experimenting with in the classroom, perhaps as a parallel reading (or even a replacement) for the usual survey text in the "Religion in America" survey course.
Email Post
Labels: heaven michael altman's posts new books reviews