Whose Story is American Religious History?

I'm here in Grand Rapids, Michigan, where I'm attending the American Society of Church History's spring meeting, organized around the theme of "Christianity and Migrations." There are any number of interesting panels and I hope to post another update before all is said and done, but for now a brief report on Rachel Wheeler's stimulating plenary address this morning entitled, "Whose Story is American Religious History? The Parallel Lives of Daniel Boone and Joshua, the Mohican." Wheeler is an associate professor of religious studies at IUPUI whose work has come up often on this blog [those interested in reading up on her first book, To Live Upon Hope, might check out fellow blogger Lin Fisher's conversation with her back in 2009].

Her talk today engaged big questions about how we should narrate the story of European-Indian encounter in the Americas, which has ramifications of course for how we tell the story of American religious history. She argued that the life of Joshua, an Indian convert to Moravianism, highlights the difficulties with both triumphalist and revisionist accounts of conflict on the frontier. The problems with triumphalism, a view summed up in Horatio Greenough's mid-nineteenth century sculpture, The Rescue, need not be elaborated here. There is a reason why the statue, an image of which Wheeler incorporated into her talk, was removed from the steps of the U.S. capitol building in the late-1950s. 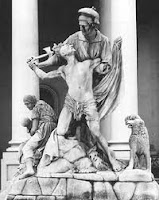 But Wheeler persuasively showed that Joshua's story also complicates the revisionist narrative, which lacks the categories to see his conversion as anything other than collusion with the oppressor; and lacks, moreover, the flexibility to allow for Moravian missionaries who - unlike some of their Protestant counterparts in the late-18th century - were not virulently anti-Indian but were in fact open to some of the ways that Indian converts made Christianity their own.

In elaborating the fascinating comparison between Boone and Joshua, Wheeler followed themes of migration, war, and conversion. All of these will be central to her next book, a biography of Joshua which will put him belatedly on more religious historians' radar (I confess that before Wheeler's talk I had not heard of him). If her second book makes the same kind of splash as her first, it may be that we'll all soon be required to take what she called the "Joshua test" - do our accounts of American religious history shed light upon the experience of this Mohican-Moravian martyr, or will we continue to relegate those like him to the margins? For the profession's sake, let's root for passing grades for all.
Email Post
Labels: American society of church history conferences frontier Heath's posts native american religion religion in colonial America

JonathanMenon said…
Have you read Mohawk Saint, by Allan Greer? It is a great example of the nuanced story about Native Americans and Christianity that you are looking for: it goes beyond the regular "conversion" narrative that often shapes these stories.

I wrote a review of it for a course I took a couple of years ago. You can find it on my blog here: http://www.jmenon.com/archives/2008/04/mohawk-saint-allan-greer-review

Paul Harvey said…
Heath: Outstanding report! Thanks for it, and hope for some others while you're there.

Jonathan, Mohawk Saint is one my top ten all-time favorites in Am. religious history, if you search through the blog archives you'll see it's come up a lot; and I would also recommend to our readers my interview with Emma Anderson a while back, the author of *Betrayal of Faith,* an incredibly rich and heartbreaking story of one Indian convert in the 17th century. I blogged about Allan Greer's book along with Anderson before here:

The interview with Anderson is here:

Finally, I might mention that our very own Lin Fisher is finishing up his fantastic manuscript which goes "beyond" the traditionalist/revisionist narrative and gives a rich and complex picture of Christianity among Native New Englanders from the mid-17th to the late 18th century.
April 8, 2011 at 4:42 PM

Heath said…
Thanks very much for the tip, Jonathan, and for the link to your review. I haven't had a chance to read the Greer book yet but it is definitely on my short list.