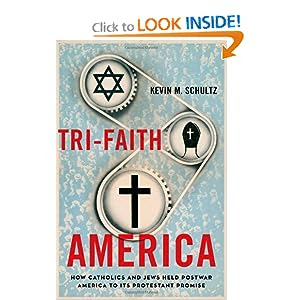 Paul Harvey
Very happy to announce that blog friend and occasional guest contributor Kevin Schultz's book is now out, with Oxford Univ. Press: Tri-Faith America: How Catholics and Jews Held Postwar America to Its Protestant Promise. A bit down the road we'll have a fuller exposition on the book and also an interview with the author; in the meantime, Kevin has a very short summary of some of his points, in "The Return of 'Christian America,'" up at the Huffington Post.
For a more substantively lengthy discussion of the material in his book, though, I would recommend also Kevin's article in the Journal of American History: "Religion as Identity in Postwar America: The Story of the Last SErious Attempt to Put a Question on Religion in the U.S. Census," Journal of American History(September 2006): 359-84. And, as blog readers may remember, Kevin and I had an article surveying the "state of the field" of American religious history, in last year's Journal of the American Academy of Religion, which I blogged about here. In the meantime, Kevin's short piece on "The Return of 'Christian America'" looks at the history of that idea, and in particular the ways Jews and Catholics interacted with that idea in the course of inserting themselves into the postwar tri-faith America.
Email Post
Labels: american judaism catholicism crossposts new books religion and politics religious conservatism religious pluralism

Janine Giordano Drake said…
I think I have searched Amazon every other month for the last year to see if this was out yet. So excited!
April 12, 2011 at 10:58 AM

Anonymous said…
Hi all, I'm looking forward to reading this book. Schulz also wrote an article entitled, "Favoritism Cannot be Tolerated: Challenging Protestantism in America's Public Schools and Promoting the Neutral State" in American Quarterly, September 2007. It is a very illuminating article that I used in a class on the Long 1960s. I expect that the book will be just as illuminating and enlightening.