Pasquier on the Impact of the Deepwater Horizon Oil Spill

Mike Pasquier has been a busy guy. In addition to writing his rich study of Jesuits in late 18th and 19th century America, our fellow RiAH blogger has been collaborating with other LSU 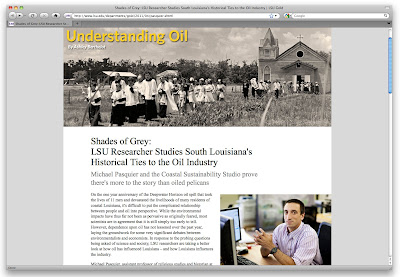 researchers who are studying the impact of the Deepwater Hoirzon oil spill. Ashley Berthelot at LSU Gold reports:

Michael Pasquier, assistant professor of religious studies and historian at LSU, has developed "Standard Lives: Visualizing the Culture of Oil in Louisiana." The goal of this project is to complement scientific investigations of the Deepwater Horizon disaster by documenting the cultural impact of environmental stressors on Louisiana's coastal communities.

"To do this, it's necessary to look at oil from 'the ground up,' so to speak," said Pasquier. "I knew we needed to take a long and unbiased look at Louisiana's relationship with the oil industry, and by extension, its effects on the everyday lives of refinery and offshore workers, as well as the businessmen, teachers, farmers, fishermen, mariners, homemakers and others with direct and indirect ties to petroleum-based services."

Pasquier started his project by delving into a photo collection at the University of Louisville that showcased in detail how the industry fundamentally transformed the social and environmental landscape of Louisiana at mid-century. . . .

"As a native of Louisiana, I grew up in a family and in communities with deep stakes in the oil industry, so I already had my finger on the pulse of a people economically and culturally invested in oil. Now, what I wanted to do was to find a way to look behind the typical photos of a literally oiled landscape to see the faces of people who are directly impacted by even the most subtle of economic and environmental changes," said Pasquier. "When we look at the photos of oily pelicans or an oiled coastline, we should also be trying to understand the backstory that was there long before the oil spill. We should also be looking for the everyday human story that isn't drenched in oil." . . .

"This isn't about justifying our use of oil, or being pro-oil or pro-environment," Pasquier said. "It's about assessing the terrible consequences of the Deepwater Horizon oil disaster by taking the time to focus on and understand the big picture, the realities that exist in everyday life for many Louisianans. This is about our history and our culture – this is about us and our future." read on >>>
Many of us heard Mike's preview of this tremendous work at the 2010 AAR. Can't wait to see the eight short documentaries that will result!
Email Post
Labels: documentaries louisiana pasquier religion and the environment religion in contemporary america

Tom Van Dyke said…
"...my collaborators and I are combining ethnographic fieldwork, archival research, geospatial analysis and design speculation to understand how people live on land and with water in environmentally threatened areas."

Don't these people ever have trouble keeping a straight face?

Paul Harvey said…
Mike's AAR presentation showing just a small bit of this project was remarkable, and very moving. Can't wait to see it all develop further.
April 23, 2011 at 4:27 PM

Randall said…
Your right, Tom. Let's just stop thinking about things altogether. We should all aspire to be, as Rousseau put it, like an oyster. Pure existence, no thinkery. Great advice!
April 24, 2011 at 6:53 AM

Tom Van Dyke said…
Randall, that's not what I'm saying. It's just when the academics parachute in with their methods and jargon to study their fellow Americans like they're life on Mars, I wonder who the Martians really are.

I did appreciate the tap dance that the study is not "pro-oil," but it seems the folks of the Delta, by their own account, prefer the oil business to subsistence farming and hunting up nutria for dinner.

Mike Pasquier said…
Hey Kid, before you start mouthing/texting off, do your homework. Louisiana is my home, born and raised. I was fortunate to get a job at the state's flagship university. My students and I have spent over 800 hours conducting interviews of people with deep knowledge of life in a region of the United States under incredible environmental threat. You should join me on my next 12-18 hour day getting to know a people that despise pseudonymity.

That being said, it doesn't require a native Louisianan to attempt to understand how oil has impacted the future of a state that bears the weight of a nation's drive for oil exploration, extraction, and refinement. Randall is right--smart, committed scholars ought not be oysters. Just ask a Louisiana oysterman without work. Have you spoken to an oysterman lately? Have you ever eaten a Louisiana oyster? Ahhh... the salt... the mud... the taste of the Gulf sliding down your gullet.

But... you're right about making the (condescending) statement that many Louisianans prefer working for oil companies than farming, fishing, or trapping. Understanding the cultural impact of economic transformation is what this project is all about.

And... you're also right about the ridiculously sounding statement that you quoted in your original ill-intended comment. It is difficult to speak both to academic audiences and popular audiences, but it's definitely worth the effort to do so. I've also learned not to question the intelligence of the people that I seek to understand, which is why my colleagues and I regularly speak at community forums and with residents of coastal Louisiana about the work that we're doing. They get it.

As for trolls on the internet, their intelligence is subject to further investigation.

Tom Van Dyke said…
Thank you, Dr. Pasquier. We do agree that that folks down your way prefer the oil business to farming, fishing, or trapping, and that the statement in question sounds ridiculous.

I do realize now that your seeming ridiculousness [and tap dance about not being pro-oil] are more accommodations for your fellow academics and not directed at normal people.

FTR, I was by no means being condescending toward the working folks of Louisiana, before or after oil. I'd hoped at least that much was clear.

I appreciate your clarifications and believe this resolves each of our issues of contention.
April 24, 2011 at 4:46 PM

Paul Harvey said…
Agreed, Tom, the issue has been resolved: Mike is a brilliantly innovative scholar deeply rooted in Louisiana history and culture -- by birth, education, current employment, and subject of research -- who has devoted his current research life to understanding embattled individual lives and institutions in his home state.

Tom Van Dyke said…
No personal insult was intended, Dr. Harvey. I don't know the fellow. However, there was a level of agreement that the academic jargon sounded ridiculous. As for the value of the research itself, I look forward to hearing more, and will abide by your clear wish to leave it at that.
April 24, 2011 at 11:50 PM