Sunday. To start, our new contributor David Stowe's "Jesus Christ, Rock Star," looks at why religion was once part of popular music, how the divide between "rock" and "Christian" music happened, and why that divide may be in the process of lessening (plus just for fun a link accompanying the article takes you to Barry McGuire's Eve of Destruction, a song that opens Todd Gitlin's capacious survey The Sixties: Years of Hope, Days of Rage):

Despite being a rare bright spot in an industry facing difficulties, music with explicit religious content has been largely segregated from non-religious pop music, both in terms of radio stations and audiences — so much so that it even has a name, contemporary Christian music.
This wasn’t always the case. For much of pop music history, religious themes had an uncontroversial place at the top of the charts, a presence most clearly felt in the late ’60s and early ’70s. But over the next decades, the politicization of faith, relying in part on the surge of youth into the country’s churches, turned religious themes into a forbidden zone for secular musicians.
Then you can hop over to John Leland (great name!), "The Evangelical Squad," which looks at evangelical entrepreneurs in some unlikely places in the NYC area, including the East Village. A brief excerpt, with a nod to Tony Carnes's Journey through NYC Religions which we blogged about here before:
But the church and its expansion into the East Village highlight a concerted groundswell of middle-class, professional evangelicals in Manhattan, an area many churches once shunned as an epicenter of sin. It is the place, many now believe, to reach the people who influence the world.

Though much attention has been paid to New York’s boom in immigrant churches, in recent decades the number of English-speaking evangelical churches south of Harlem has grown tenfold, to more than 100, said Tony Carnes, a researcher and founder of the online journal A Journey Through NYC Religions, who has studied New York churches since the 1970s. Without fanfare, the newcomers have created networks to pay for new churches and to form church-planting incubators, treating the city as a mission field.
"Because the institutions are new, Mr Carnes added, the city has become “like a Silicon Valley of church-planting. “You can come here, try new ideas, fail and start again,” he said. “It’s a hot area where failure isn’t a disgrace.” 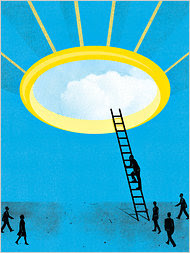 Finally, our good friend Lauren Winner appears in the Book Review section, reflecting on all the recent brouhaha over Rob Bell's Love Wins. She writes of the long-lived yin-and-yang of exclusivity versus universalism in evangelical thought, including in the nineteenth century with Elizabeth Stuart Phelps's The Gates Ajar.

So, too, Rob Bell is articulating the concerns of a generation of Christians schooled in toleration, whose neighbors and coworkers and siblings are Muslim or Buddhist or agnostic, a generation whose pluralist social commitments are at odds with theological commitments to limited salvation. Bell speaks for those Christians who take the Bible seriously but can’t imagine their secular friends aren’t going to heaven, too. He speaks for that woman in the pew who can’t bear the thought of spending eternity apart from her atheist brother. The tweeting gatekeepers of conservative evangelicalism may also share these concerns, but for them, the solution is to convert the unbelieving neighbor.
Email Post
Labels: gospel music music religion and popular culture religion in the press religion in urban america rock music theology