"When baseball functions as a civil religion," observes Joe Price in Rounding the Bases, "its true believers--the passionate fans and players who shape their worldviews and daily routines around their devotion to the game--experience a kind of sacramental rejuvenation i 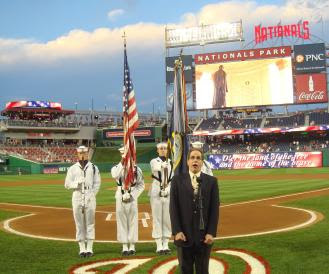 n the game itself." Joe makes it no secret that he is a "true believer." The book concludes with a thoughtful recollection of his own baseball "conversion" narrative. And this summer, as research for his next book, Joe will sing the national anthem at over 100 minor league baseball parks across the nation.

If you're interested in following along, check out his website , Facebook page, and blog. Joe's wife is also coming along for the ride (they're traveling in an RV), blogging on her side of the story.

Here's one of Joe's dispatches from Florida...

At St. Lucie, a twin pillared sculpture made from remnant steel at Ground Zero graces the entry to the ballpark and pays tribute to the victims of the Twin Towers’ attack. Created by Patrick Cochrane, the piece was donated by retired New York City firefighters who live in the St. Lucie area.

As I entered the ballpark to sing for Florida's Mets, the relic reminded me of the consummate performance of the national anthem by Daniel Rodriguez, then a New York City policeman, at Yankee Stadium shortly after the 9/11 tragedies.

While the crowd’s response to my anthem rendition in St. Lucie was enthusiastic, the most expressive gestures and comments came from Mets players and a vendor. As I walked the gauntlet past the Mets dugout right after I had sung, manager Pedro Lopez gave me thumbs up and said “Good job,” followed by third-baseman Richard Lucas reaching over the dugout railing to shake hands with me. A short time later, the vendor who was roasting pretzels over a charcoal fire near the backstop breezeway expressed great appreciation for the anthem itself. He offered that his wife, Laura Mercado, had auditioned a couple of days earlier to sing for the Mets and hopes to sing soon for one of the games.

A similar connection took place the following day in Jupiter while I was eating a delectable lunch at Le Metro in the Abacoa Town Center. Tiara, the waitress, recommended the broth-based mushroom soup and, as an entrée, grilled scallops, presented over tabouli, sliced tomatoes, and a fan of avocado slices dressed with an herbed balsamic vinegarette. I still savor that meal. When she asked what business had brought me to town, I indicated that I’d be singing for the Hammerheads a few hours later. “Wow!” she exclaimed and then recounted how some years ago when she had been living in Newport Beach, California, her daughter Nicole Gero had sung the national anthem for the Freedom Bowl game.