Food and no Food

Eating . . . and not eating. Since the post from the other day was about religion and weight gain, here's another about relieving world hunger and fasting for a cause. 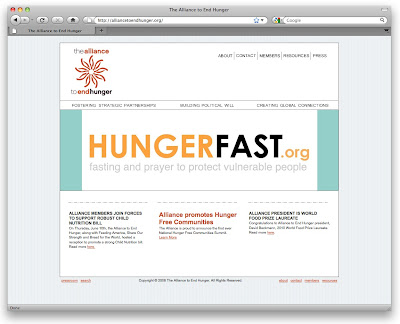 NPR ran an intriguing story the other day about Former Congressman and director of Alliance to End Hunger Tony Hall, who "has joined dozens of religious leaders and thousands of supporters to protest budget cuts that they say will unfairly affect the poor." It reminded me of George McGovern's talk I heard at the University of Florida nearly a decade ago. The lecture was sponsored by the History Department. McGovern pondered his religious upbringing, discussed what the US could do to alleviate hunger around the globe, and spoke briefly about how the 9/11 attacks were changing America and its relationships with other nations. (I'm also thinking of activist and ag specialist Glen Fell who spoke at ENC the other day on his work training subsistence farmers around the globe in an effort to reduce hunger.)

Back to the NPR piece:

PAM FESSLER: Meet Tony Hall. A few weeks ago, the 69-year-old might have been called a little pudgy. Today, he hikes up his pants before he sits.

Mr. HALL: I am the executive director of the Alliance to End Hunger.

FESSLER: He's also a former Democratic congressman from Ohio who made headlines in the 1990s by going on a 22-day hunger strike. He was protesting what he saw as congress's failure to address the problems of the poor. And today?

Mr. HALL: Well, I'm in my 18th day of a hunger fast. I started off as a water-only fast and now I'm doing liquids. And really what we're trying to do is raise awareness.

FESSLER: So far, he's lost about 18 pounds. But Hall says it's not so bad, especially when thousands of people around the world die each day of malnutrition and millions of Americans worry about their next meal. He worries what will happen if lawmakers accept proposed cuts in food stamps and foreign aid.

Mr. HALL: They have a moral obligation when they look at this budget not only to cut the budget but to cut it in a righteous way. . . .
Email Post
Labels: randall's posts religion and social reform religion in the news social justice

Janine Giordano Drake said…
Recently I heard long-time activists Stoughton and Alice Lynd talk about how the hunger strike has hardly ever really worked as a political tool, but it has been effective lately, especially within high security prisons.
April 18, 2011 at 1:48 PM

Tom Van Dyke said…
Dude seems to be replaying his career "Greatest Hit," One-Hit Wonder thing. He pulled the same stunt after the House fell to the GOP in 1993 and cut a subcommittee that fed no one, but was tasked with raising "hunger awareness."

I don't want to get too cynical, but if it's a question of resources, just raise food & money for the hungry already.

And if it's a question of politics, go after ethanol subsidies or EU trade barriers, or the half-a-hundred other causes of hunger that aren't stamped G.O.P.
April 18, 2011 at 9:27 PM

Randall said…
On a global scale, I suppose the US could give more than just .15% of GNP in foreign aid. That amount is lower than what these countries give: