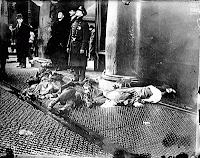 Tomorrow marks the 100th anniversary of NYC's Triangle Shirtwaist Fire, a sweatshop blaze that consumed the lives of nearly 150 women in what still stands as one of the nation's worst industrial disasters. Interest in this solemn occasion has only been intensified by the current controversies involving unionization and collective bargaining, which have been discussed at some length on this blog and around the web.

Many of the women who died were Jewish, and New York's Jewish community has taken a leading role in the public remembering. This Sunday, for example, several groups are sponsoring a procession in which 146 persons, one for each of the victims, will march from the site of the fire to the Eldridge Street Synagogue. For more on that event, you can peruse The Triangle Walk's blog.

If you are interested in reading a brief history of the fire, as well as finding out about some of the other commemorative events happening around the nation this weekend, you might check out WNYC's site as well as the Labor and Working-Class History Association's (you have to scroll down a little ways on the latter).
Email Post
Labels: american judaism Heath's posts religion and economics religion and labor women's history

rjc said…
Heath, thank you for posting this. Another event not included in American religious history texts, but that makes one wonder what that history might look like if things like this were included.
March 24, 2011 at 9:25 AM

Atlanta Roofing said…
The Triangle factory actually wasn’t a lock-in. But in those days there were no restrictions on egress routes, and the doors opened inwards, instead of outwards. What this meant was that in a panic situation, a scrum of people rushed to the exit door, and found they couldn’t open it because of the pressure from the people stacked up behind them, pressing everyone forward against the door. This is one of the effects that most people find rather far fetched, until they see the evidence of piles of suffocated people piled up against a door, after a fire has been put out.
March 25, 2011 at 12:08 AM

Janine Giordano Drake said…
I always find it funny when people tell me this "wasn't in history texts." As a granddaughter of immigrants who all grew up in NYC tenements, a native New Yorker, and a kid in the high noon of labor history (the 1980s), I feel like I heard about this fire constantly throughout childhood--in school, at home, at the public library, and certainly in school and in my history textbooks. And then again, I also always thought labor history was the coolest thing in the world. It's always disappointing (and a bit disorienting) to learn that this is not nearly so known in other parts of the country.
March 25, 2011 at 12:41 PM

rjc said…
Just to clarify, in response to Janine's comment: the Triangle fire is in history texts, but not typically in texts on American religious history.
March 25, 2011 at 2:19 PM