Today we'll be discussing Paul E. Johnson and Sean Wilentz's The Kingdom of Matthias (Oxford University Press, 1994) in my Forging of an American Nation (1783-1865) class. As most readers of RiAH know, the authors tell the story of a strange religious group and its even stranger prophet, Matthias. 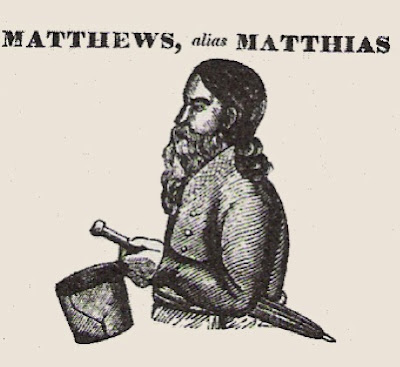 The tale of Matthias's Kingdom--rife with "free-lovism," violence, and mystifying, anti-Finneyite beliefs--became front-page news in the 1830s. Early reports from those in my class who have already dug in are positive. One said it seemed a little like a 19th-century E True Hollywood Story.

I picked up a collection of essays, State of Mind: A Boston Reader (1948), at Commonwealth Books here in town last week. It includes wonderful material from the 17th to the mid 20th century. One selection--"The Newness" by Robert Carter, an essay that appears in the November 1889 issue of the Century Magazine--would be a good primary source item to read alongside The Kingdom of Matthias. Carter's sarcastic romp through the reform decades does not deal directly with the hirsute prophet Matthias, but an oddball cast of other wide-eyed dietary, dress, social, and anti-slavery reformers make an appearance in "The Newness." The essay can be read as a local color, skeptical, post-Civil War remembrance of the failures and naivete of reformism.

I include a few passages here:
By the "Newness" I mean a very singular intellectual and spiritual movement which broke out like an epidemic in New England some forty years ago, and ran its course for about ten years, when it subsided and disappeared almost as suddenly as it arose. I call it the "Newness," because that was the most distinctive term applied to it, and the one by which it was most frequently designated by those engaged in it, though in fact it had no authentic or universally accepted appellation. By outsiders it was generally called Transcendentalism, 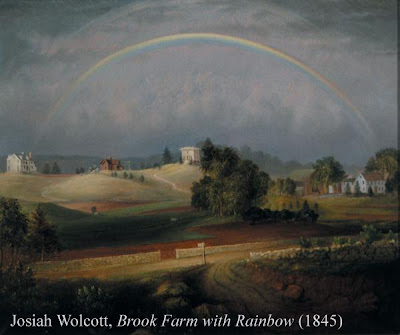 and its disciples Transcendentalists, and to some extent and at certain periods those terms were used by the disciples themselves. . . .

I have noticed the influence which Unitarianism, Abolitionism, and the study of German literature had in producing the "Newness," and I have mentioned 1835 as about the date of its manifestation. The republication in this country of Carlyle's Sartor Resartus in 1836, and the appearance in the same year of Emerson's Nature, followed rapidly by his other works in the same vein, may be said to have brought the movement to a head, and it soon culminated in the issue of the magazine called "The Dial," in July, 1840, and, shortly after, in the establishment of the Community or Association of Brook Farm, near Boston. . . .

Brook Farm, however, was not the only community which was founded by the disciples of the " Newness." There was one established in 1843 on a farm called Fruitlands, in the town of Harvard, about forty miles from Boston. This was of a much more ultra and grotesque character than Brook Farm. Here were gathered the men and women who based their hopes of reforming the world, and of making all things new, on dress and on diet. They revived the Pythagorean, the Essenian, and the monkish notions of asceticism, with some variations and improvements peculiarly American. The head of the institution was Bronson Alcott, a very remarkable man, whose singularities of character, conduct, and opinion would alone afford sufficient topics fora long lecture. His friend Emerson defined him to be a philosopher devoted to the science of education, and declared that he had singular gifts for awakening contemplation and aspiration in simple and in cultivated persons. He was self educated, but had acquired a rare mastery of English in speech, though his force and subtlety of expression seemed to fail him when he wrote. His writings, though quaint and thoughtful, are clumsy compared with his conversation, which has been pronounced by the best judges to have been unrivaled in grace and clearness.

Mr. Alcott was one of the foremost leaders of the "Newness." He swung round the circle of schemes very rapidly, and after going through a great variety of phases he maintained, at the time of the foundation of Fruitlands, that the evils of life were not so much social 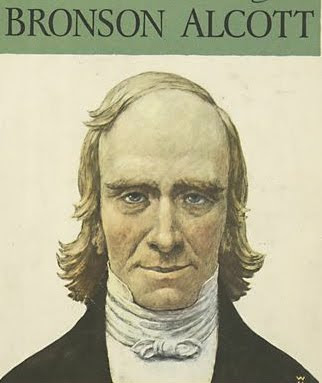 or political as personal, and that a personal reform only could eradicate them; that self-denial was the road to eternal life, and that property was an evil, and animal food of all kinds an abomination. No animal substance, neither flesh, fish, butter, cheese, eggs, nor milk, was allowed to be used at Fruitlands. They were all denounced as pollution, and as tending to corrupt the body and through that the soul. Tea and coffee, molasses and rice, were also proscribed,— the last two as foreign luxuries,— and only water was used as a beverage.

Mr. Alcott would not allow the land to be manured, which he regarded as a base and corrupting and unjust mode of forcing nature. He made also a distinction between vegetables which aspired or grew into the air, as wheat, apples, and other fruits, and the base products which grew downwards into the earth, such as potatoes, beets, radishes, and the like. These latter he would not allow to be used. The bread of the community he himself made of unbolted flour, and sought to render it palatable by forming the loaves into the shape of animals and other pleasant images. He was very strict, indeed rather despotic, in his rule of the community, and some of the members have told me that they were nearly starved to death there; nay, absolutely would have perished with hunger if they had not furtively gone among the surrounding farmers and begged for food. . . .

Brook Farm exploded in 1847 and Margaret Fuller went to Europe, I think it had very little distinctive existence in New England. The aspiring youth of New England seem now to be contented with making their way in the world very much as other people make it, without seeking for any fundamental change in the established order of society.
Email Post
Labels: brook farm fruitlands new england randall's posts religion and slavery religion and social reform religion in antebellum america transcendentalism

Anonymous said…
I'm teaching K of M the next couple of weeks. I love Bushman's response to it in his Smith biography - that it was an unimportant group that got attached to Smith and Mormonism because Johnson and Wilentz are such incredible historians. Great and intriguing stuff all around.
March 22, 2011 at 10:23 AM

Randall said…
That's right on! I always ask the students about the relevance/irrelevance of the Matthias story.

Only a good historian could take a random psychotic religious episode and make something out of it.
March 22, 2011 at 1:48 PM

rjc said…
But is it correct to lump the "Newness" (Transcendentalism) in with "a random psychotic religious episode" (if in fact that's the best way to describe the K of M, which of course did also give us Sojourner Truth)? Might there not be better ways to explore individuals, movements, ideas, practices, and so forth that did not catch on in huge numbers? I'm thinking, on the one hand, of Catherine Albanese's work on Transcendentalism (her dissertation and first book were on The Dial), and on the other hand of Leigh Schmidt's new book (Heaven's Bride). Both of these situate their respective subjects in such a way as to reveal something more about the larger religious climate and possibilities of the time, in ways that more narrow church history-type studies often miss.
March 22, 2011 at 2:57 PM

Randall said…
rjc: I think that these individuals and groups do reveal something larger about the culture. But, I also would argue that it's hard to look at the life of Robert Matthews without acknowledging that he was a strange character, a criminal, and, maybe even, a madman. (I was being a little facetious with that crack about psychotic rel.)

I would not equate Matthias with Ida C. Craddock. (My interview with Schmidt and the post on the book is here: http://usreligion.blogspot.com/2010/10/leigh-eric-schmidt-on-ida-c-craddock.html)
March 22, 2011 at 4:24 PM

Anonymous said…
I wouldn't exactly say that the Kingdom of Matthias "gave us" Sojourner Truth. My sense is she would have emerged as a personality, as a symbol, and as a genius with or without Robert Matthews. Of course, that's speculation.