The Myth and/or Impossibility of Religious Freedom

Though I bought it hot off the presses, I didn’t get around to reading David Sehat’s The Myth of Religious Freedom until two months later. Though I know we posted about this book a while back (including a great two part interview with Sehat by Paul Harvey), it’s back on the blog again. This past week, I read Sehat’s book in tandem with Winnifred Sullivan’s The Impossibility of Religious Freedom. 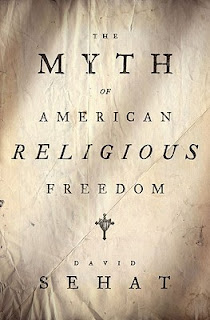 American history. These “moral establishmentarians,” though foiled from having explicit state support for religion, found ways to police American society by making their brand of Protestantism the grounds for morality. If you wanted to cultivate moral, upstanding citizens – religion offered the template for doing so. Blasphemers and Sabbath-breakers were culpable before the Revolution (check out Susan Juster’s essay “Heretics, Blasphemers, and Sabbath Breakers” in The First Prejudice for more), and they would continue to find themselves in court long into the 19th century. While the liberal justices in Supreme Court of the mid- and later-20th century would argue for a historically based strict separation between church and state, Sehat offers a history that suggests otherwise. In Sehat’s engaging and persuasive narrative, religious freedom in the US is a historical myth.

The moral establishmentarians of Sehat’s account reminded me of the “evangelical epistemology” Sullivan identifies in her 2005 book on the Warner v. Boca Raton case (in the Warner trial, a

handful of plaintiffs claimed the city impinged on their free exercise of religion by removing religious grave decorations in the city cemetery). Those ascribing to the evangelical epistemology of Sullivan’s book understand religion, or “true religion” as they would argue, to be something “private, voluntary, individual, textual, and believed.” Sullivan notes the Protestant bias to this type of definition and nicely contrasts it with the lived religion-style grave décor constructed by the plaintiffs. Statues of the Sacred Heart of Jesus or Mary, a large upright cross, and a vertical Star of David statue – though not officially required on graves by their formal religious institutions – were religious to the family members who used them as grave markers. Ultimately, the judge ruled in favor of the city. Since horizontal, flat religious markers (in moderation) were allowed by city cemetery regulations, the judge didn’t see any intrusion on the plaintiffs’ religious freedoms. Part of the sophistication of Sullivan’s book is her development of the “evangelical epistemology” that seemed to dominate the way the city defined religion. Sullivan herself served as an expert in religion for this case, and the definition of religion she described to the court was different. She noted how in America, religion often exists outside of official institutions and has changed over time in light of lived experiences and practices. The city’s definition of religion evoked an image of people sitting in church pews listing to a preacher, while the plaintiffs’ religion suggested a religious street feste complete with sights, sensations, smells, and sounds.

The notion of religious freedom is much beloved in American society. Its appeal is

so strong that it long downplayed narratives of religious intolerance both inside and (still) outside the academy (a concept succinctly and nicely outlined in John Corrigan and Lynn Neal’s documentary history, Religious Intolerance in America). I have become more and more interested in bringing legal issues into my projects. Be it black codes, the Sunday blue laws, or suffrage restrictions - recognizing the role legal issues play in American religious history offers another way to analyze the past. Furthermore, it provides an additional way to argue for our relevance to wider readerships and support our position in the changing collegiate institutional system. American religious history is far from irrelevant. Myth, impossibility, or both – books and arguments like Sullivan’s and Sehat’s further develop our narratives of American religious history by highlighting the complex relationship between American law and American religions.

Kelly J. Baker said…
Emily, you have now forced the issue. I must buy Sullivan and Sehat to go along with Tracy Fessenden's excellent work on the stealth Protestantism that is secularism on my already tired and overworked book shelves! This is an excellent pairing of Sehat and Sullivan, and I think the continued reticence of problematizing religious freedom will now come to a head.

John and Lynn's volume showcase nicely what is at stake when we hold onto to the mythical religious freedom as the cost of historical reality and suffering. My poor students, semester after semester, wonder why I can't present the happy history of religion in North America. Now, I have more books for my arsenal. Cheers!
March 17, 2011 at 9:47 AM

Barton Price said…
Great article, Emily. I have got to read all of the above (except I was copy editor and indexed Corrigan/Neal, so I've got that down). And kudos, Kelly, for tying in Fessenden (which I need to appreciate more).

I wonder if Sullivan's "epistemology" is a correct understanding of Protestant evangelicals. Clearly, these evangelicals think of themselves as anti-material, a current that runs through the Reformed tradition in sixteenth-century Switzerland, England and New England. But, historians like McDannell, Gutjahr, Candy Gunther Brown point to the "materiality" of evangelicals' lived experiences (especially their texts). While I think Sullivan's typology of the "epistemology" is an interesting and useful category, I also do think that it needs to be challenged with historical data to the contrary.

I am also uncomfortable with the "private" aspect of Protestant evangelicalism. This is another one of these fictions about this religious tradition that needs exposed and challenged. I think it is this fiction that has informed the legal history of religious freedom (which seems to be Sehat's point).