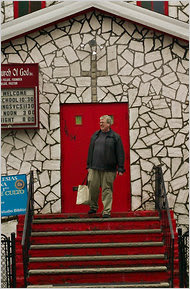 Paul Harvey
Earlier we blogged about a fascinating web venture, A Journey Through NYC Religions, run by a former Texan turned New Yorker who is endeavoring to map every house of worship, of every religious tradition, in the NYC metropolitan area.
In "Mapping Religious Life in the Five Boroughs," Mark Oppenheimer writes about this project, and spends some time with its creator, Tony Carnes, as he spots small mosques above Pakistani restaurants in Queens and the like. And read it now before the Times pay wall goes up. A little taste:

Along the way, Mr. Carnes, with three part-time assistants and other freelance helpers, is posting his findings online tonycreligion.info, his “public square,” he called it, where people can read about “the sizzle of religion in New York — the kosher sizzle! The halal sizzle!”

Mr. Carnes is in search of every church, cathedral, synagogue, shtiebel, mosque, temple, zendo and ashram. His crew gathers information by asking for it, in person. By the end of 2011, they will have driven every street in New York.