John Fea on the TV

RiAH friend and contributor John Fea was recently featured on C-Span's Book TV. Fea appears on a March 18 panel on The Founding Fathers and Religion. He speaks about his new book Was America Founded As a Christian Nation?: A 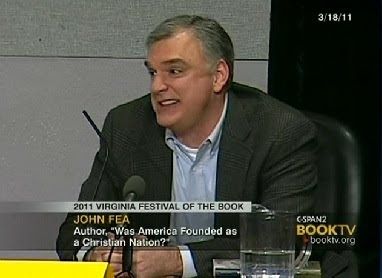 Authors talked about their books on the American Revolution and role played by religion in the founding of the United States. They also responded to questions from members of the audience. Tatiana van Riemsdijk moderated. The participating authors were: Barbara Clark Smith, author of The Freedoms We Lost: Consent and Resistance in Revolutionary America; John Fea, author of Was America Founded As a Christian Nation?; and John Ragosta, author of Wellspring of Liberty: How Virginia's Religious Dissenters Helped Win the American Revolution and Secured Religious Liberty. "Founding Fathers and Religion" was a panel at the Virginia Festival of the Book in Charlottesville, Virginia, held in the City Council Chambers on Friday, March 18, 2011.
Email Post
Labels: christian nation Founders randall's posts religion in colonial America

Paul Harvey said…
John: Great job. It's very hard to come across well in video like this (I know, having watched taped versions of my classes sometimes!), but you have a great presence and disarming style.
March 31, 2011 at 3:31 PM