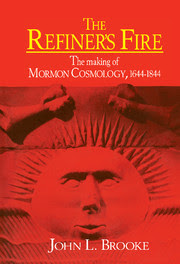 Christopher Jones
In 1994, Cambridge University Press published John L. Brooke's The Refiner's Fire: The Making of Mormon Cosmology, 1644-1844. As indicated by the subtitle, Brooke's work aimed for a wholly unique and provocative re-interpretation of Mormonism's origins. While it was generally met with praise in the academy and won the Bancroft Prize in 1995, the book was almost universally panned by historians who specialized in Mormon history, and received its harshest (and most polemic) critiques from believing Latter-day Saint scholars (and especially from pseudo-scholarly apologists, some of whom seemed intent on making the most out of the publicity that might come with reviewing an award-winning book).
In the almost two decades since Brooke's work appeared, the sometimes hostile and always intentionally-unique world of Mormon studies has undergone significant changes (though the ever-earnest apologists remain). So have the disciplines of history and religious studies. All of these changes have led a younger generation of Mormon historians to reconsider Brooke's argument and approach. When I recently re-read The Refiner's Fire while preparing for comps, I was surprised at what I'd missed last time through and at how much I liked much of what he was trying to do (and indeed, did). Over at the Juvenile Instructor, Matt Bowman has posted his own brief thoughts on The Refiner's Fire, together with those of Steve Fleming, whose currently in-progress dissertation aims to expand on and revise some of Brooke's central ideas, and Mark Ashurst-McGee, editor of the Joseph Smith Papers project, whose research focuses on Joseph Smith and folk magic and Joseph Smith's social and political thought.
Matt explains by way of introduction his own take on the book and its importance:

It’s my opinion that the further we get from the publication of John Brooke’s The Refiner’s Fire, a wildly inventive examination of Mormon origins through the lens of various esoteric European -isms (including occultism, the quest for hidden and often mysterical knowledge; hermeticism, a particular brand of the occult supposedly derived from ancient Egypt and for Brooke basically a restorationist concept that sought to regain Adam’s access to God, and the non -ism alchemy, or the transformation of the mundane into the exalted) the more interesting a book it seems. Its flaws - most revolving around the difficulty of transplanting such quirky early modern concepts as these to frontier America, though Brooke gives it a go with the vehicle of Masonry – have been well documented; its strengths have been less well recognized by LDS historians, who have tended to find the book, frankly, weird. Thus, too many of the doorways Brooke opened have remained unused.