Academic talk of Native American-European cultural hybridity and cultural conflict immediately take my mind to the Caribbean world and major port cities like New Orleans or Santo Domingo. When authors write about “creolization,” I think of cultural intersections between French, Spanish, Native American, and African traditions in the American South. I don’t immediately think of Alaska. However, a new book I recently reviewed for Itinerario: International Journal on the History of European Expansion and Global Interaction has widened the geographic spread I associate with creolization, or rather kreolization.


In the 1980s and 1990s, theorizing of the Atlantic World by historians such as Bernard Bailyn

and later David Armitage placed the colonial Americas within a more nuanced, engaging, and dynamic framework. The Pacific World and its impact on the colonial Americas has yet to be as thoroughly explored as the Atlantic, but works such as historian Gwenn A. Miller’s Kodiak Kreol: Communities of Empire in Early Russian America demonstrate the importance of expanding the view of colonial American encounters. With the first permanent Russian settlement in Alaska in 1784, the Russian empire continued its eastward movement setting up its own business-oriented, colonial enterprise in the “new world.”

Together, the missionary work of the Russian Orthodox Church and the education imparted by the fur-trading Russian-American Company offered government and trade officials a method to “civilize” the Alutiiq population and thus extend Russia’s imperial border. Miller’s micro-history of interactions between indigenous Alaskans, Russian fur traders, and missionaries on Kodiak Island elucidates how “a distinct Kreol colonial society” developed that “was neither wholly Russian nor wholly Alutiiq.” In a world of mutual dependence, intimate encounters between Russian fur traders and Alutiiq 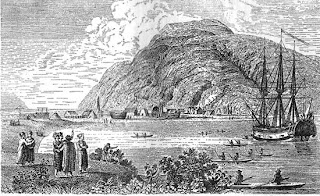 women led to a new Kreol generation of colonial subjects to be defined, controlled, and integrated into the imperial Russian enterprise. In their attempts to convert, Christianize, and “civilize” the Alutiiq people, the Russian missionaries demonstrate how interactions between Native Americans and their colonizers were fraught with complications on Alaska’s Kodiak Island. The British praying towns, the French Canadian seaways, and the American southwest were not alone. Though the situation in Alaska was less physically violent, it wasn’t necessary less culturally complex.

For a long-time, the gaze of American historians was that of the covered-wagon pioneers - westward. Miller is certainly not the first or only scholar to change the frame of reference. In her contribution to Thomas Tweed’s 1997 Retelling US Religious History, Laurie Maffly-Kipp elucidates how a narrative based in the Pacific Rim further illuminates typical historical account. Daniel Richter’s often cited Facing East From Indian Country: A Native History of Early America encourages historians to think about their narratives from the shoes – or moccasins – of “the other.” Miller’s book offers a colonial narrative far from the cities of Boston, New York, or Charleston that is both similar and different from the stereotypical westward European expansion model. For those of us interested in syncretism, cultural mixing, hybridity, colonial intersections, creolization, or whatever you want to call it, Kodiak Kreol provides another vantage point from which to theorize.