Was America Founded as a Christian Nation? 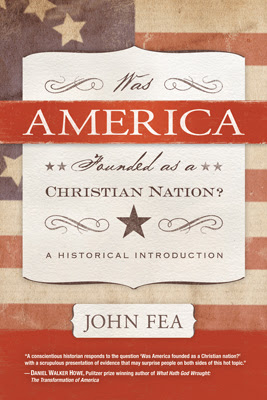 Paul Harvey
The question is badly posed, our contributor John Fea points out in his new book, to be available in just a couple of weeks, Was America Founded as a Christian Nation: A Historical Introduction.
Publishers' Weekly has a nice note on the book:

Fea, history professor at Messiah College, does not answer the title query because, he says, “it’s a bad question.” Instead, Fea urges, think like a historian. Turns out, history is not about picking the best fruit off the vine to support your opinion--or the opinions of TV talkers--it’s about doing your homework. He does just that to produce this primer, as he calls it, which defines “history,” “nation,” and “Christian.” Fea studied current position papers of proponents and opponents of the title’s question, and he read from the past: the Federalist papers, John Adams and Jefferson’s writings, state constitutions, debate resolutions. In part one, the author traces the concept of a Christian nation from 1789 to today; part two focuses on the American Revolution, from the British colonies’ points of view to the constitutional “wall of separation between church and state.” Part three, the most fluid and fascinating, profiles specific founders, their orthodoxy vs. their orthopraxy, especially concerning the topic of complex, un-Christian slavery. Fea’s style, clean and simple, persuades by history, not histrionics. (Feb.)
John has some more thoughts on defining the terms of the book here; his speaking schedule on behalf of the book over the next couple of months is here.
This is a book meant for a broad audience, and also (one hopes) will help public rhetoric turn it down a notch by introducing some sense of historical complexity and contingency. Congratulations to John, and we wish his book a most successful launch.
Email Post
Labels: 18th Century christian nation constitution fea's posts Founders religion and the american revolution

Bruce Kelly said…
I recently read this book as part of an undergraduate class. I was impressed by the books clear readable writing and the emphasis on how to think like a Historian. His fair treatment of the founding in religious terms is unlike the polarizing public consumption books found on a Barnes & Noble shelf. As a student I would recommend his book as a class text, because of its fair-mindedness and its guide on historical thinking.
December 8, 2011 at 3:54 PM

Anonymous said…
I agree with the previous commenter that this book was a nice read and was good at touching on major points as to whether America was truly founded as a Christian Nation. Fea began the book off strong by referencing the beginning of Article 11 of the Treaty of Tripoli and ends it with the religious views of our founding fathers. It was nice that Fea took a scholarly approach to this topic rather than a slanderous approach like authors such as Kramnick & Moore took in their book about the same subject.
December 13, 2011 at 1:16 PM