Cain on the Brain

Lately, I’ve been thinking a lot about Cain. This certainly is not the most healthy topic to be contemplating – with the violence and family murder – but these things happen when one is in a religion department. Last week in a seminar on religious intolerance, we read René Girard’s Violence and the Sacred, and for this week, we’re reading Regina Schwartz’s The Curse of Cain. But this isn’t the primary manner in which Cain keeps coming across my laptop screen. Rather, his identity and his “mark” are wrapped up in America’s past with African slavery. When it comes to Christian pro-slavery arguments, Ham is typically the star historical player (Sylvester Johnson’s The Myth of Ham provides a great exploration of this). Identifying Noah’s curse as biblically legitimate proof that Africans’ natural state is one of enslavement, nineteenth century American slave-owners stood by their rhetoric through a civil war.

Ham’s bad behavior was not the only piece of Christian scripture southerners lifted from the text. In 1850, the Southern Presbyterian Review printed an article titled “The Mark of Cain and Curse of Ham;” and in it, the author cites both these biblical figures to argue that “the special Providence of God” created “the varieties found existing in the family of man.” Providing religious justification for the racial differences perceived around them, pro-slavery Americans argued for the religious origins and morality of slavery. And this kind of religiously-grounded language translated into other rhetorical realms, such as legislation. In the infamous 1857 Dred Scott case, Chief Justice Taney’s majority opinion explained how African slaves and their 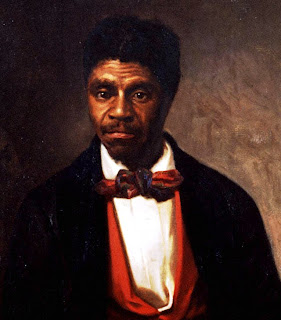 descendants were not US citizens. Through his (questionable) reading of the Constitution, Taney wrote that blacks “were never thought of or spoken of except as property” throughout America’s legal history. Even more important for this particular historian, Taney states that “the unhappy black race were separated from the white by indelible marks.” Slavery, racism, and “marks” call to mind a certain Old Testament verse. Though I’m not certain (I’ll get back to you at the end of the semester after writing an anticipated seminar paper), these “indelible marks” referenced by Taney seem related to contemporary readings of Genesis 4:15. After killing his brother Abel, Cain receives a “mark” from God, and some pro-slavery arguments interpreted this mark as darkened skin. Many point out how the American Constitution is literally “godless,” but religion has a sneaky kind of way of infiltrating legal rhetoric. Eric Slauter’s fairly recent cultural history of the Constitution, The State as a Work of Art, identifies how contemporaries to the Constitution understood the rights of man to be sacred, given by a Divine Providence, even if said Deity isn’t directly recognized. Is the Dred Scott decision an instance of religion diffusing from church buildings and into secular parlance? If it is, then it is certainly not alone. Yesterday the country remembered Martin Luther King, Jr., a man well-known for using religion in civil settings to push for legislation.
Email Post
Labels: emily's posts religion and slavery religion and the law

Anonymous said…
Let us not forget Bruce Springsteen's "Adam Raised a Cain." The Boss is of course concerned with class rather than race, but the song is a compelling exploration of "being born into this life paying for the sins of someone else's past."

Its a rocking song too.

In the Bible Cain slew Abel
And East of Eden he was cast,
You're born into this life paying,
for the sins of somebody else's past,
Daddy worked his whole life, for nothing but the pain,
Now he walks these empty rooms, looking for something to blame,
You inherit the sins, you inherit the flames,
Adam raised a Cain.
January 21, 2011 at 9:41 PM