Paul Harvey
We've blogged here before about David Sehat's The Myth of American Religious Freedom, which I had the privilege of reading in pre-release. The book is now out, with Oxford, and it's a real intellectual treat which is sure to spark discussion and debate. Previously I promised to blog about it along with Sarah Gordon's Spirit of the Laws, and I still intend to do that, when I can steal the time to engage the works at the level they require. Anyway, here is more about the book, cross-posted from U.S. Intellectual History:

The Myth of American Religious Freedom 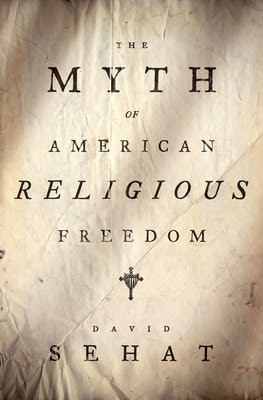 Dear Readers: I'm delighted to announce the early release of my book, The Myth of American Religious Freedom. Here is the jacket copy from OUP:

In battles over religion and politics in America, both liberals and conservatives often appeal to history. Liberals claim that the Founders separated church and state. But for much of American history, David Sehat writes, Protestant Christianity was intimately intertwined with the state. Yet the past was not the Christian utopia that conservatives imagined either. Instead, a Protestant moral establishment prevailed, using government power to punish free thinkers and religious dissidents.

In The Myth of American Religious Freedom, Sehat provides an eye-opening history of religion in public life, overturning our most cherished myths. Originally, the First Amendment applied only to the federal government, which had limited authority. The Protestant moral establishment ruled on the state level. Using moral laws to uphold religious power, religious partisans enforced a moral and religious orthodoxy against Catholics, Jews, Mormons, agnostics, and others. Not until 1940 did the U.S. Supreme Court extend the First Amendment to the states. As the Supreme Court began to dismantle the connections between religion and government, Sehat argues, religious conservatives mobilized to maintain their power and began the culture wars of the last fifty years. To trace the rise and fall of this Protestant establishment, Sehat focuses on a series of dissenters--abolitionist William Lloyd Garrison, suffragist Elizabeth Cady Stanton, socialist Eugene V. Debs, and many others.

Shattering myths held by both the left and the right, David Sehat forces us to rethink some of our most deeply held beliefs. By showing the bad history used on both sides, he denies partisans a safe refuge with the Founders.
Email Post
Labels: constitution First Amendment new books religion and the law religion in antebellum america religion in colonial american religion in the gilded age

Phil Sinitiere said…
Congrats, David! Can't wait to read the book. Looking forward to the conversations it will inspire.
December 16, 2010 at 11:20 PM