I grew up in San Antonio, and it is never dull here in the borderlands. I went to high school with kids who parents were in the US “illegally,” and I played select soccer with a girl from the valley who regularly saw people passing through her backyard on their way north from Mexico. Though in this past week, immigration has taken a back seat to drug trafficking. The recent death last Thursday of La Familia leader Nazario Moreno Gonzalez, or El Chayo or El Más Loco, put 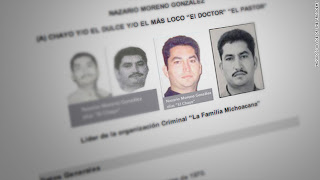 the Mexican drug war back to the front pages of newspapers and the top of search engines. After a two day shootout between the cartel and Mexican Federal Police officers, El Chayo was found dead. Coming just days before the feast of La Virgen de Guadalupe, Moreno was shot in an atmosphere charged with religious, social, and political significance.

Politics, violence, power, and religion combined in a visible and tragic manner with La Familia Michoacana, commonly referred to as La Familia – an organized crime syndicate and drug cartel. La Familia drew attention to themselves in 2006 when they rolled the heads of five petty criminals on the floor of a Mexican discoteca accompanied by a note: The family does not kill for pay, it does not kill women or innocents. Only those who deserve to die will die. Everybody understand: this is divine justice (note originally in Spanish). With this act, La Familia introduced themselves as the new moral compass for Mexican and borderland life. Under their leader Moreno the group took on religious overtones, as he called himself “the savior of the people,” and a “messiah” for the Mexican poor. Each member received a copy of La Familia’s “bible,” written by Moreno which explained the group’s philosophy and justified the mandate of “divine justice” to new recruits. Here is an often cited quotation from his book, titled Pensamientos (Thoughts): Today, we need to prepare to defend our ideals so that our struggle will bear fruit (and) organize so as to go down the best path, perhaps not the easiest, but the one that can offer the best results. In July of 2010, a list of the group’s mandatory reading surfaced in the media, which included evangelical author John Eldredge's popular Wild At Heart: Discovering the Secrets of a Man’s Soul. Eldredge’s book is a kind of new take on “muscular Christianity,” and as described by the author, “a call for men to engage as husbands, fathers, members of their community. So there is this call to be a hero, to live a life that matters, to make a difference.” Eldredge’s moral and masculine appeal for action found a welcome home in Moreno’s philosophy, which views the protection of life, land, and integrity at stake.

La Familia’s headquarters remained in Mexico, but they also operated in multiple areas of the US – primarily Texas, New Mexico, Arizona, Nevada, and California. It is well known for its violent tactics to punish those in their way, both ideologically and in their lucrative drug business. Dumping the murdered bodies of Mexican Federal Police officers in the summer of 2009 solidified stopping La Familia a prime objective of the Mexican government and of the US. Though, this would not be easy. Not only are drug cartels hard to catch (watch Harrison Ford in Clear and Present Danger if you don’t believe me), but La Familia gained the loyalty and love of 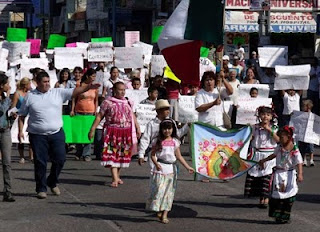 many locals. The group gave money and food to the poor and donated to schools and charities. In his official profile, the Mexican government wrote that Moreno “erected himself as ‘the Messiah,’ using the Bible to preach to the poor and obtaining from them unconditional support.” In western Mexico, a parade this past Sunday combined a peace march in honor of Moreno with images of another divine protectress, La Virgen de Guadalupe. Young girls carrying an image of La Virgen de Guadalupe walked just ahead of an onslaught of La Familia sympathizers outfitted with signs for their beloved, slain “messiah.” One marcher carried a sign for Moreno reading: Nazario Siempre Vivira en Nuestro Corazón (Nazario will always live in our hearts). A boy in the parade bore a sign stating: Sr. Nazario Para Los Estudiantes Tus Ideales Siguen Vivos (Mr. Nazario, for the students your ideals remain alive).

Despite what one may think of La Familia’s religious philosophy, they represent a role religion plays which is not to be taken lightly. Organizing, mobilizing, and inspiring members of La Familia, El Chayo proved the force religion has 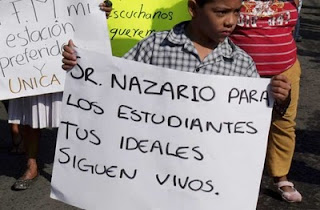 in political and social affairs. Though vastly different in many ways from the American Civil Rights Movement of the 1950s and 1960s, religion worked in comparable ways for both La Familia’s leaders and Martin Luther King, Jr. and Fred Shuttlesworth. In A Stone of Hope: Prophetic Religion and the Death of Jim Crow, David Chappell deems the Civil Rights Movement the Third Great Awakening in American history elucidating the way Christianity united and propelled the movement. Moreno may not have taken a page from King’s “turn the other cheek” way of thinking, but religion mustered La Familia’s members and appears in mourners’ lament for their fallen leader.
Email Post
Labels: emily's posts Latino/a religion religion and violence religion in contemporary america

esclark said…
Yesterday San Antonio law enforcement received a lesson in the religious culture of borderlands drug culture. See the link for a San Antonio journalist's description of the lesson and its implications. http://www.mysanantonio.com/news/local_news/article/Studying-the-saints-that-narcos-pray-to-885365.php
December 15, 2010 at 8:29 AM